As consumers continue to face high gasoline and utility bills, the Biden administration refuses to use the most readily available resource in the country – the federal lands leasing process – to help bring down prices. Simply put, Americans are feeling pain at the pump in part because of an administration that continues to slow and discourage investment in oil and gas.

In recent weeks leading up to the Midterm elections, President Biden doubled down on mixed messages and misleading statements about his administration’s policy towards federal lands leasing. At a rally in New Mexico earlier this month, President Biden claimed that there has been no slowdown in leasing in the state – although the facts say otherwise. But while campaigning for Democrats in New York state, President Biden bragged that there will be “no more drilling” under his tenure.

These mixed messages have real effects, particularly in states like New Mexico, where a large part of oil and natural gas production takes place on federal lands. In 2021, New Mexico became the second-largest producer of oil in the country, with approximately 54 percent of that production taking place on federal lands. Royalties and other payments from the oil and natural gas industry make up approximately 35 percent of New Mexico’s budget, which funds essential infrastructure, education, and healthcare priorities.

Unfortunately, analysis from Energy in Depth shows that the Biden administration has slowed down leasing in New Mexico, hindering the production of domestic oil and natural gas in the middle of a global energy crisis.

President Biden has been campaigning across the country leading up to midterm elections to support Democratic candidates in energy-producing states. To help address voter concerns about energy prices, President Biden claimed that his administration has not held back oil and natural gas companies from producing energy in New Mexico – this is simply not true.

During a rally for the Democratic party on November 3rd in Albuquerque, New Mexico, President Biden said the following when discussing high energy prices:

“I know we have a lot of leases out here in New Mexico for oil companies. And we haven’t slowed them down at all. They should be drilling more than they’re doing now. If they were drilling more, we’d have more — more relief at the pump. But the oil industry hasn’t met their commitment to invest in America and support the American people.” (Emphasis added) 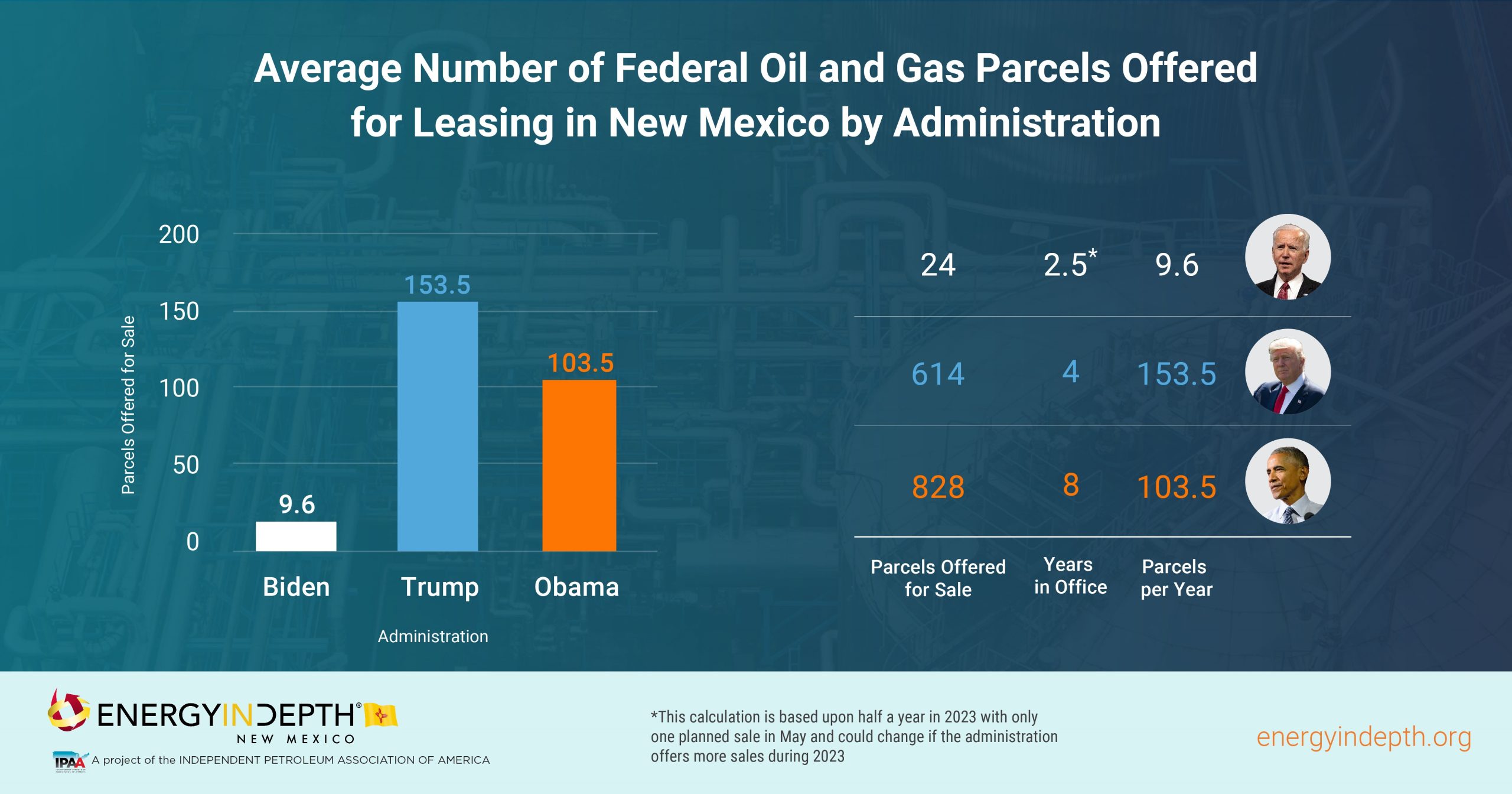 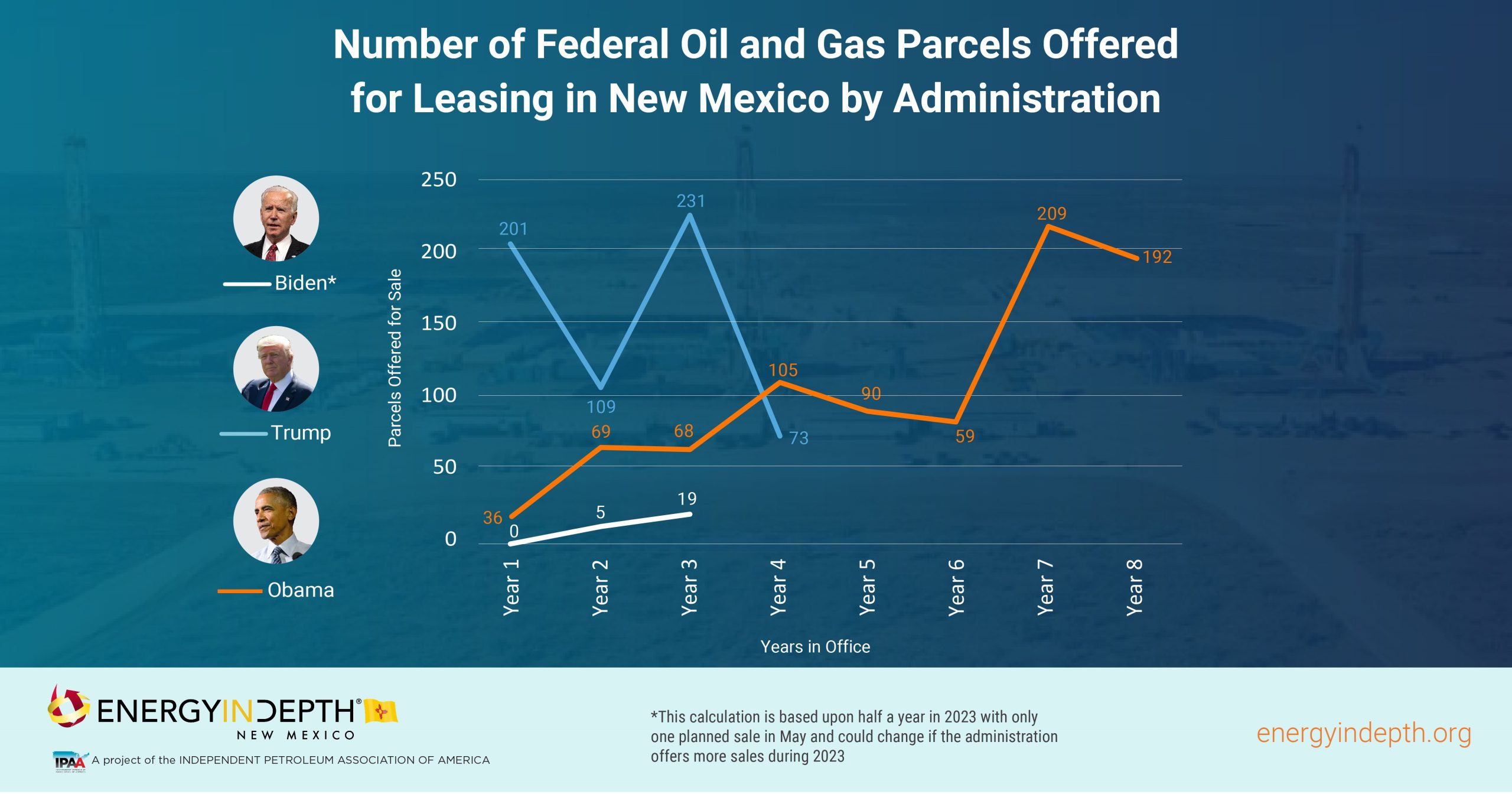 This is the stark reality in New Mexico and other states – while President Biden may say his administration hasn’t slowed oil and gas companies down, the facts prove otherwise.

As Energy in Depth previously covered, despite the administration’s statement to “work like the devil to bring gas prices down” and use “every tool at our disposal to protect American businesses and consumers from rising prices at the pump,” the President has bragged about stopping oil and natural gas drilling during his time in the White House and vowed to block future production.

Notably, the total acreage offered in lease sales across the country is at the lowest level since the Truman administration, according to a recent Wall Street Journal analysis:

“The Biden administration has leased fewer acres for oil-and-gas drilling offshore and on federal land than any other administration in its early stages dating back to the end of World War II.” (emphasis added)

While the Biden administration continues to send the public and oil and gas companies mixed messages, the truth remains that it is hindering oil and gas exploration on federal lands in New Mexico and beyond.

The post President Biden’s Comments on Federal Lands Leasing in New Mexico Are Disconnected from Reality appeared first on .