Permian tight oil production set a new 11-month high in March, more than compensating the record drop in the preceding month. The outlook is positive with the recent increase in rig counts and with more permits being filed (esp. by EOG) 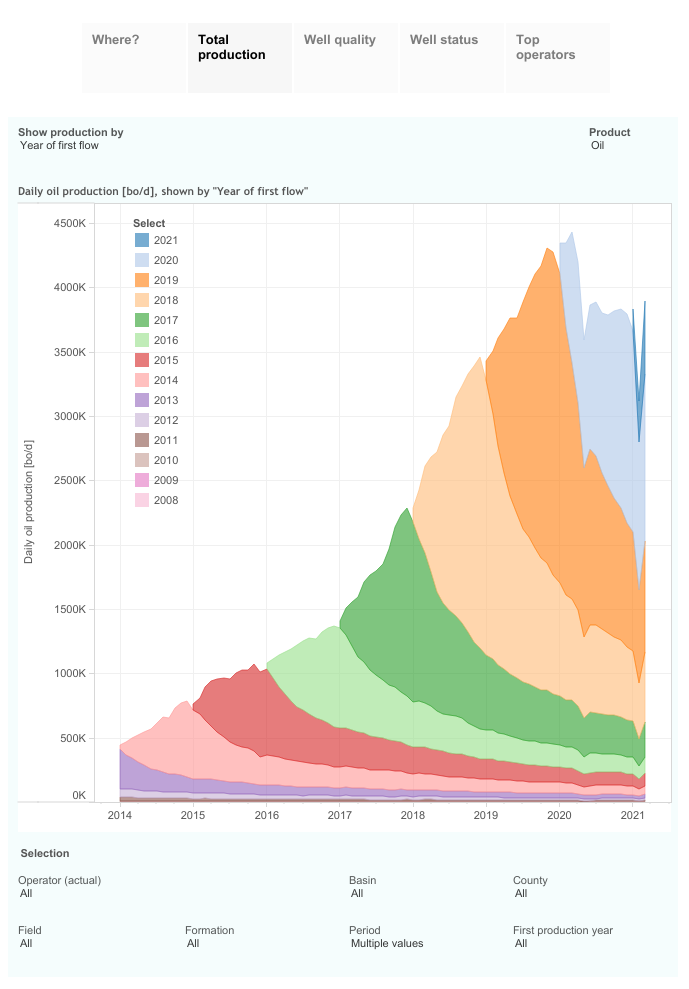 This interactive presentation contains the latest oil & gas production data from all 30,700 horizontal wells in the Permian (Texas & New Mexico) that started producing from 2008/2009 onward, through March 2021.

Tight oil production in the Permian rose by 800 thousand bo/d in March (horizontal wells only), more than compensating the fall in the preceding month due to the cold weather. At 3.9 million bo/d, output was the highest since April last year.

Although the rise in the horizontal rig count has slowed in recent months, the 227 rigs drilling horizontal wells here as of last week (according to Baker Hughes) should allow output also to slowly start increasing again: 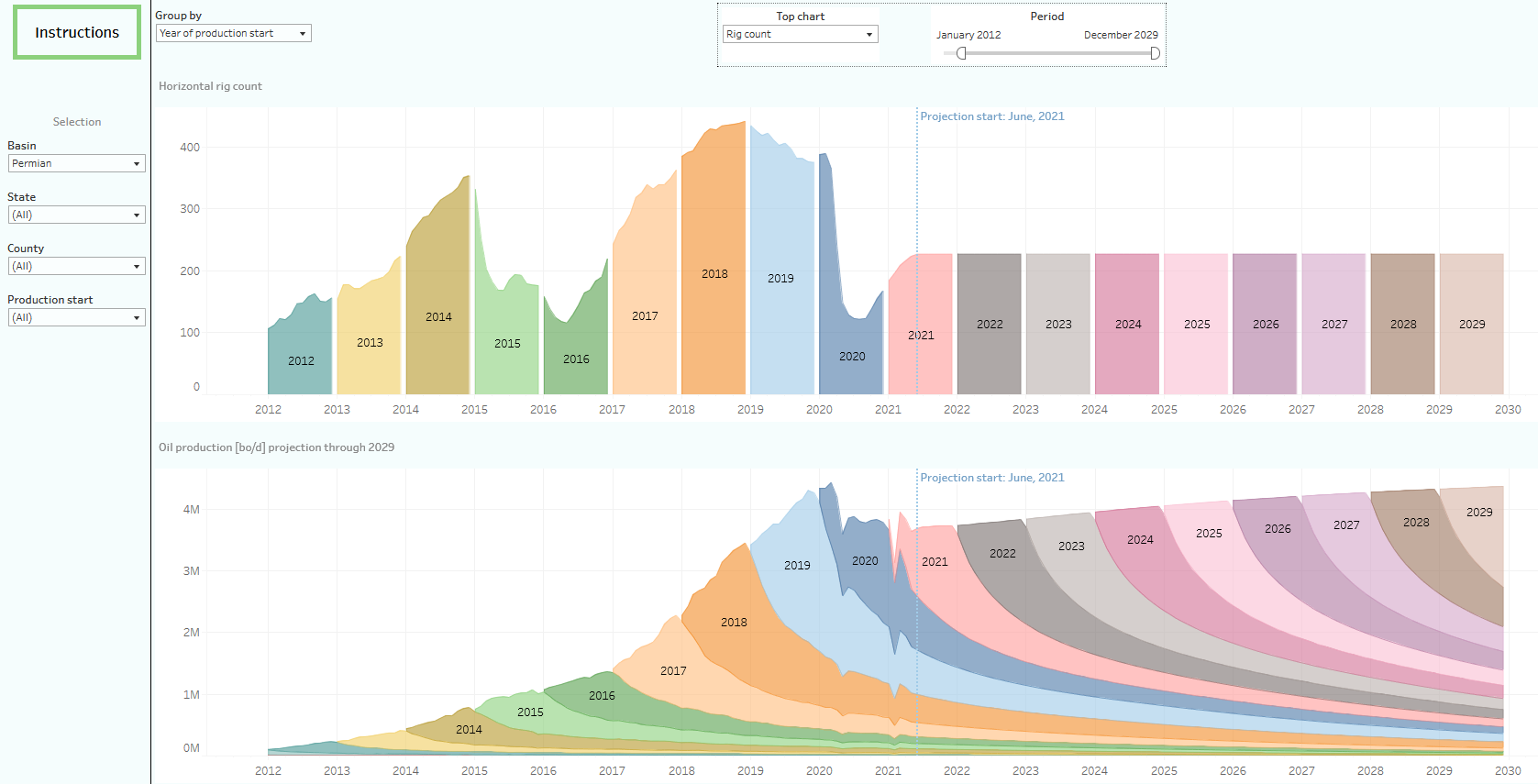 Tight oil outlook in the Permian, based on current drilling activity & well productivity

This screenshot was taken from our Supply Projection dashboard.

As reported in earlier posts on this basin, average well productivity has increased somewhat since 2016, but after normalizing for the increase in lateral length, results are slightly down:

As is visible in the chart on the right, wells completed in recent years are trending towards somewhat lower ultimate recoveries per 1,000 ft of lateral length.

So far in Q2 (through June 16th), 1,494 permits for new horizontal wells have been approved in the Permian basin, the highest quarterly number since Q1 last year, when almost 2,300 locations were permitted:

Permit activity for horizontal drills by quarter and latest permit status, since 2012

The following dashboard, also taken from our Permit Activity dashboard, shows the approved permits in Q2 by operator: 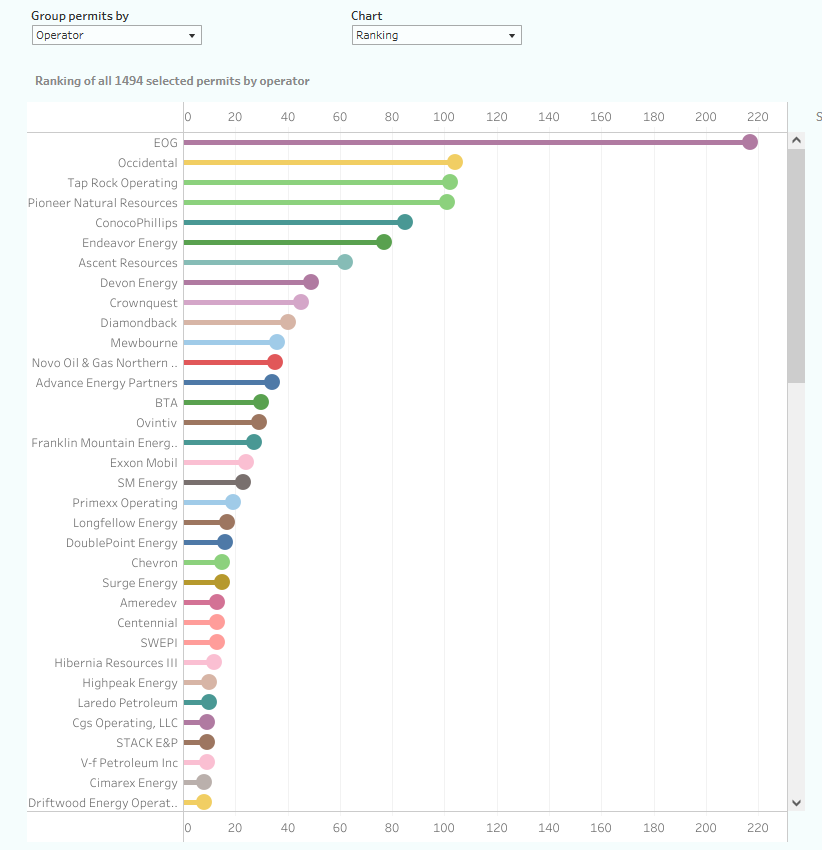 Ranking of operators by approved permits in Q2

EOG is far in the lead, with 217 approved permits, more than double the number 2 (Occidental, with 104). Note that the interactive version of this dashboard allows you to see exactly where the permitted locations are, together with other permit details.

In the final tab (“Top operators”) the production and well positions are displayed for the 10 largest producers in the Permian. Pioneer Natural Resources and ConocoPhillips, the numbers 1 and 2, both set new production records in March.

We will have a new post on the Eagle Ford early next week, followed by a post on Pennsylvania.

Visit our blog to read the full post and use the interactive dashboards to gain more insight: https://bit.ly/2UfyzrR