According to The Economist, the oil industry faces a basic problem. If the price of Brent crude, the global benchmark, surpassed $100 a barrel, about 90% of the world’s oil could be extracted with a return on capital of at least 10%, according to Rystad Energy, an energy-research firm. Today Brent fetches just over $40 a barrel, making about half the world’s oil reserves too costly to produce (see chart 1). Oil prices are expected to rebound as post-pandemic demand picks up, but by how much is fiercely debated.

Oil and gas firms, which report second-quarter earnings in the coming weeks, are cutting investment and trying to sell billions of dollars’ worth of resources. Even before COVID-19 lockdowns hit energy demand and oil firms’ profits, investors were wary of big projects. 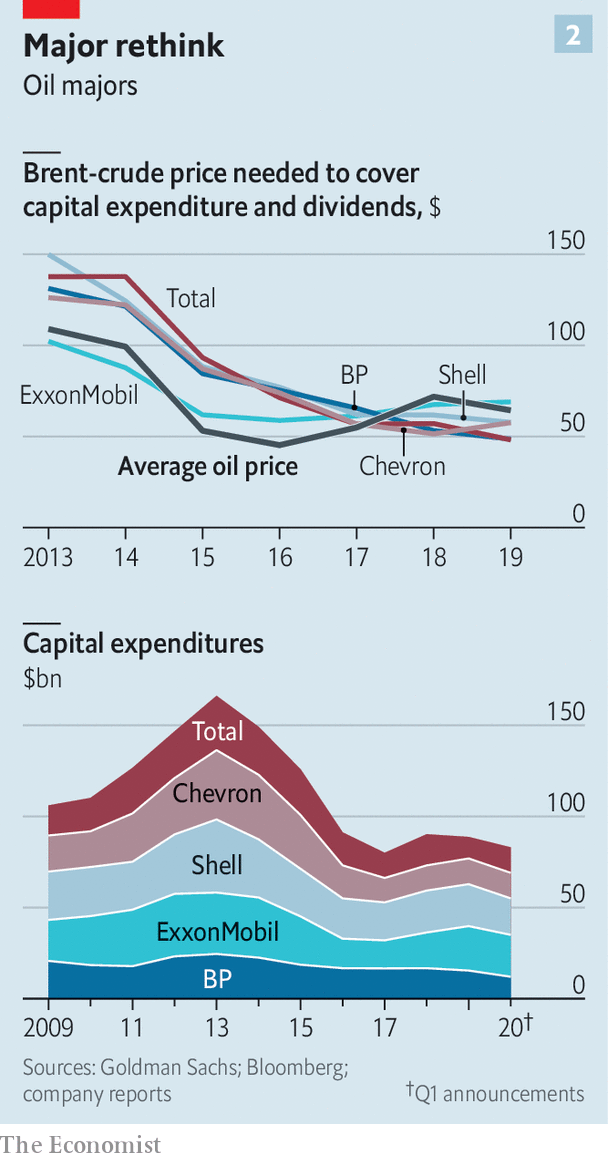 Now the risk of costly stranded assets has grown more obvious. Last month bp and Royal Dutch Shell, an Anglo-Dutch rival, said they would take write-downs of up to $17.5bn and $22bn, respectively, on assets.

The oil majors are ever keener to own only the cheapest, cleanest reserves. Getting there will be tough.

What are your thoughts on this strategic shift?

What to do with the cruddiest crude Long before oilmen fracked the Permian basin, they came to Prudhoe Bay. Spanning more than 800 square kilometres of Alaska’s North Slope—an area the size of New York City—it remains one of the most productive oilfields in American history. In 1977 bp began pumping the black stuff from Prudhoe Bay, whence a new pipeline transported it over 1,300km of frigid wilderness to the port of Valdez. The project was a triumph of engineering and a testament to bp’s ambition. This month the British giant achieved a different feat: it sold its stake in Prudhoe Bay and other Alaskan oilfields to Hilcorp, a smaller firm. When, in April, it looked as if the $5.6bn sale might be at risk, bp said it would extend a loan to Hilcorp to help close the deal. ExxonMobil, an American behemoth that remains bullish on future fossil-fuel demand, has declined to write down its shale assets. The impairments announced by bp and Shell last month accompanied revisions to their forecasts for the price of Brent. Shell now expects a barrel to cost $40 in 2021 and $50 in 2022, down from the $60 it assumed in its most recent annual report. bp forecasts that Brent will average $55 from 2021 until 2050. Just a few months ago its central assumption for prices over the next 20 years was $70. bp’s outlook for gas prices at Henry Hub, a benchmark for that commodity, has darkened, too, from a long-term average of $4 to $2.90 per million British thermal units.

Oil and gas firms, which report second-quarter earnings in the coming weeks, are cutting investment and trying to sell billions of dollars’ worth of resources.

So who's buying these resources if they're no longer a sure bet?

They are typically bought by smaller firms which are taking bigger risks and might quickly disappear if it goes wrong.  It's not really good for the industry and certainly not good for the resources and the environment. That's another issue and it should be addressed soon by establishing clear rules before it gets worst or out of control.

Thanks Stephane.  Of course, you are correct in saying that oil companies want the cheapest, cleanest assets.  But Matt´s question (So who's buying these resources if they're no longer a sure bet?) brings up an important point. BP appears to have decided that their available capital is better spent elsewhere, given the purchase price of its Alaska assets, than by investing further in Alaska. Those assets require substantial expenditures in, not least, production and transport infrastructure in order to maintain or increase production. However, the Alaska BP assets may not be on the losing side of either of the $100 or $40 per barrel thresholds you quote.

And Hilcorp has other ways of reducing costs in order to wring profit out of such assets, e.g. reducing labor costs, extending the life of installed infrastructure. Also, it is to be hoped that they will be compliant with high safety and environmental standards and not cut costs by lowering those bars. However, their operational record is questionable, at least.  They have a long record of being fined for non-compliance with the law.

Some speculate that Hilcorp will do as they have done before, i.e. “Hilcorp’s operational strategy, sometimes referred to as “acquire and exploit”, involves acquiring and reviving older oil and gas properties and legacy wells that are in decline, and cutting costs to push the return limits for aging wells. But a string of regulatory violations in 2015 led the Alaska Oil and Gas Conservation Commission (AGOCC) to conclude a “disregard for regulatory compliance is endemic to Hilcorp’s approach.”

Indeed, Hilcorp is not the first company, nor will it be the last, to operate in this way.

There must be some reason why “BP announced Thursday that about half of its roughly 1,500 Alaska employees have accepted a job with Hilcorp...”

BP´s exit from Alaska is ostensibly more related to a restructuring of the company´s priorities, for better or worse (please excuse my skepticism).

So,  would you accept the following further definition and clarification of what you are saying here, in this key sentence, and those that follow?

If the price of Brent crude, the global benchmark, surpassed $100 a barrel, about 90% of the world’s oil could be extracted with a return on capital of at least 10%, according to Rystad Energy, an energy-research firm. Today Brent fetches just over $40 a barrel, making about half the world’s oil reserves too costly to produce (see chart 1).

Rather it would be clearer to say that "...about 90% of the world´s hitherto undeveloped oil fields, or existing fields with higher costs in order to maintain production in the decline phase of the field could be extracted by major independent integrated oil companies with a return on capital of at least 10%...”

Those undeveloped fields that are owned by the major independent oil companies are largely in more remote places onshore or offshore, in deep water or, not least, highly taxed areas.

In other words, fields that have already been developed for some years, but not in decline stages of their production phase, generally have much lower thresholds for profitability, with accrued amortization costs for their exploration and development included.  And these majors represent only about 8% of world oil production and even less the percentage of reserves.  After all,  Saudi Arabia can still produce lots of oil for under about $2 per barrel.  Only 2 of the top 10 world´s biggest oil producing companies are in the group of the major integrated independent oil companies (in 2019). And they are dwarfed by the first two (Saudi Aramco and Rosneft).

I do not know of many examples at the moment, though the new fields that are just starting production in the Norwegian North Sea may be such examples, where producing fields are operating at a loss with $40 dollar Brent.  In the case of fracking and producing in the Permian, those costs are exceeding the $40 threshold.  And they simply have stopped drilling and fracking in order to reduce costs.  I would question whether shale plays in the US are a better fit for BP, but they probably know what they are doing. I do remember that in the 1980´s, when oil prices went down to $12 for awhile, many North Sea fields operated at a loss for periods of time, most notably BP´s Ula and Gyda fields.

In any case, your thesis is quite correct with respect to some stranded assets, which may mean that even if the cost of exploration has already been spent,  the cost to develop them likely exceeds the value of the product produced in a given (long) period of time.

One consequence of the situation we have now, however, is that the major oil companies may simply calculate that the money is better spent enhancing production in older fields, instead of developing new ones, by investing in additional wells, workovers, artificial lift and other less risky expenditures, or by selling them to companies like Hilcorp.  Other companies keep poorly producing assets but apply alternative means in order to reduce costs.  Shell´s Prelude may be an example of that, where costs have skyrocketed, regulators have detected safety issues and contractors are pushing back.

Traditionally, what the major independent producers brought to the table was new technology to produce more, in a safe and responsible manner.  But, in times like the present, the modus operandi of the majors is simply to cut costs, sometimes in dubious ways.

Many undeveloped but discovered reserves will have to wait for the return, if that day ever comes, of $100 per barrel oil.   National governments do have ways to make that happen sooner, of course, by way of changing tax regimes or by threatening to take away licenses for assets that are considered marginally stranded due to the oil price.

In the meantime, governments and taxpayers have to learn to live with the Hilcorps of this world.  It is not a pleasant prospect, as North Sea oil workers are finding out, as well as former Alaska BP employees and regulators.

Mark, great information, and perspective. Do you have experience working in the oil industry?

Thanks very much, Mark, for the info and comprehensive research on Hilcorp and some others that are showing a really bad aspect, or I should say bad behaviors, of some players in this industry.

You're right, governments will have to get involved, and notably, to take care of these bad behaviors for this industry to recover after the big transition ahead.