No more woes on the gas market? A review of the current developments

Prices on the European gas market have fallen sharply since August 2022 and Europe’s gas storage facilities are almost full. That raises the question if the situation on the gas market is relaxing. Find the most important answers and developments in this article.

Gas prices on the decline since August

At the end of August 2022, the gas price for the 2022/2023 winter contract on the Dutch trading point TTF stood at over 340 EUR/MWh, while prices for the front year 2023 surpassed 310 EUR/MWh. Since then, however, prices for gas on the European markets have fallen by 50-70 percent. Nevertheless, the sharp price declines should not distract from the fact that long-term gas prices remain at record levels compared to previous years. On the European leading market TTF, the monthly contract for January 2023 was still trading at around 137 EUR/MWh on October 26. Prices in the German market area THE also followed this development. Compared to the previous year, this corresponds to a price increase of almost 400 percent and a doubling compared to the beginning of 2022 (see Figure 1). 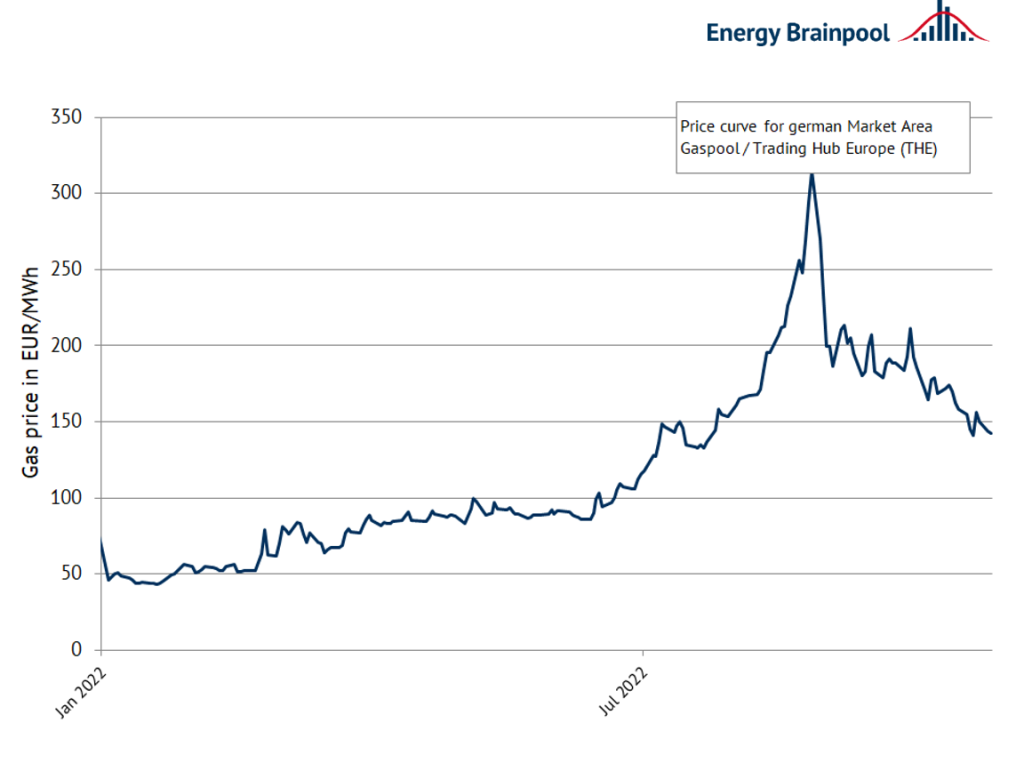 The main reasons for the falling prices in the past weeks until the end of October 2022 are:

Following the loss of a large part of Russian supplies (currently only about 10 percent of EU gas imports), imports of liquefied natural gas via European LNG terminals became a lifeline. Figure 2 depicts the development of LNG imports to Europe. Here, it is particularly clear that LNG imports had already been surging since the end of 2021, made another leap of almost 2000 GWh/day after the start of the war, and were at record levels throughout the summer of 2022. About 40 percent of imported gas supply into the EU currently comes from LNG. 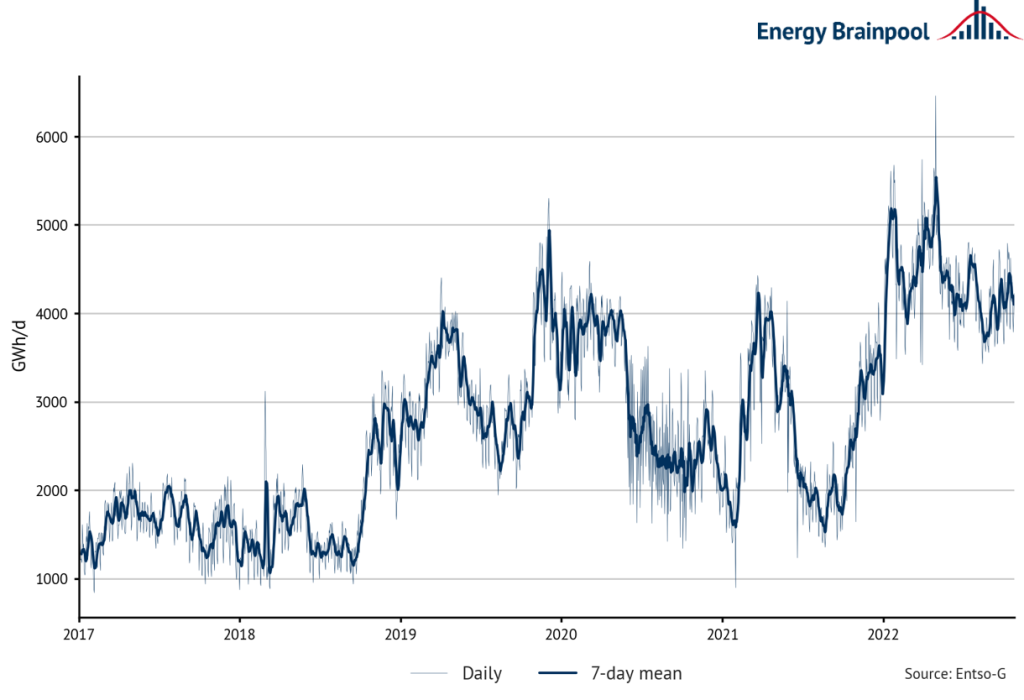 In addition to high LNG imports, Norway has also increased gas production and currently contributes about one-third of gas imports to the EU. The sharp increase in gas imports from other countries has allowed Europe to fill its gas storage facilities during the summer and fall.

Since the beginning of April, European gas storage facilities have started to be filled by their operators and often on behalf of the respective nation states in order to reach the European or national minimum storage levels. This was also one reason why gas prices were so high in the summer months. Across the EU, the goal was to reach a storage level of 80 percent by November 1, 2022, and in Germany even 95 percent. These storage targets have been exceeded in many countries and thus, also in the EU as a whole (Figure 3). 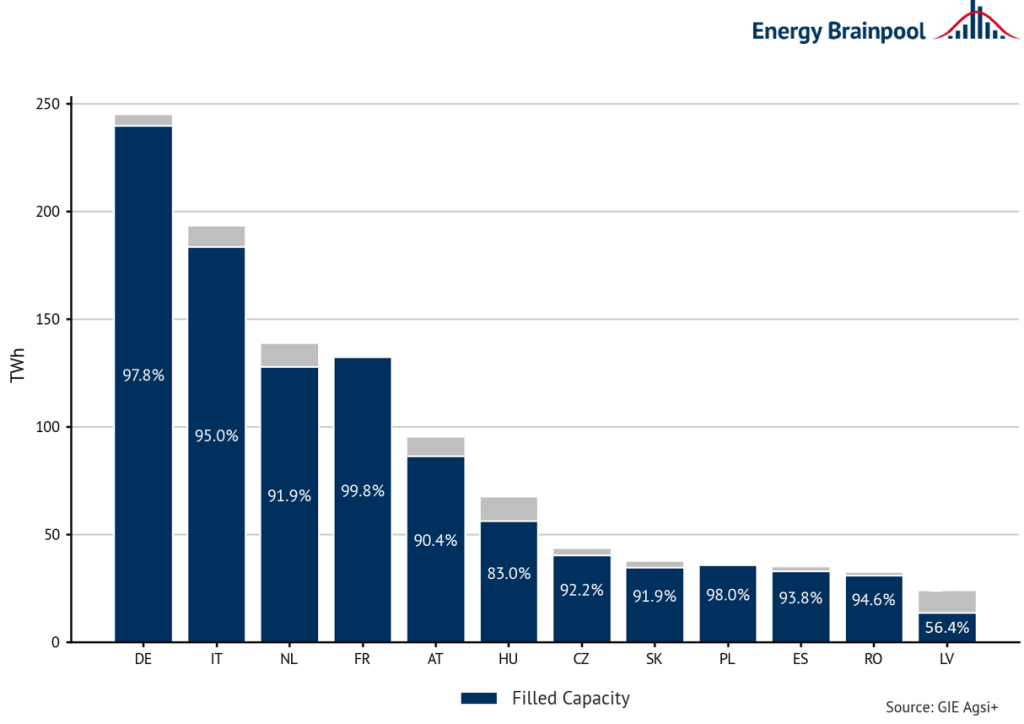 The high storage levels also have a psychological effect on traders. They were also responsible for falling gas prices on the markets. Still, German gas storage facilities, for example, even when full, are only sufficient to supply consumers in winter for a period of two or two and a half months. Further gas conservation measures and continuous imports are therefore necessary to meet demand in the months February to April. Another important point: The higher the storage levels at the end of this winter, the easier and more secure it will be to fill them for the winter of 2023/2024. For this reason, Germany also has a target of 40 percent for storage levels as of February 1, 2023. Whether this mark is reached depends heavily not only on the still required imports to the EU, but also on the decline in consumption due to gas savings.

Due to the high gas prices, European industry has already implemented saving measures, fuel switches or, in the worst case, production cuts (demand destruction) during this year. Since the market prices of gas are passed on more directly to industrial customers, an effect could already be observed in the summer. This is also shown in Figure 4, which breaks down gas demand in Germany by RLM (registering power metering) and SLP (standard load profile) customers. Industrial consumption (RLM) fell by up to 30 percent, especially in energy-intensive and gas-dependent industries such as aluminium and chemicals – in some cases with drastic economic effects due to cuts in production. The EU and national governments are trying to mitigate the economic impact with aid packages worth billions of euros, such as the German gas price brake. 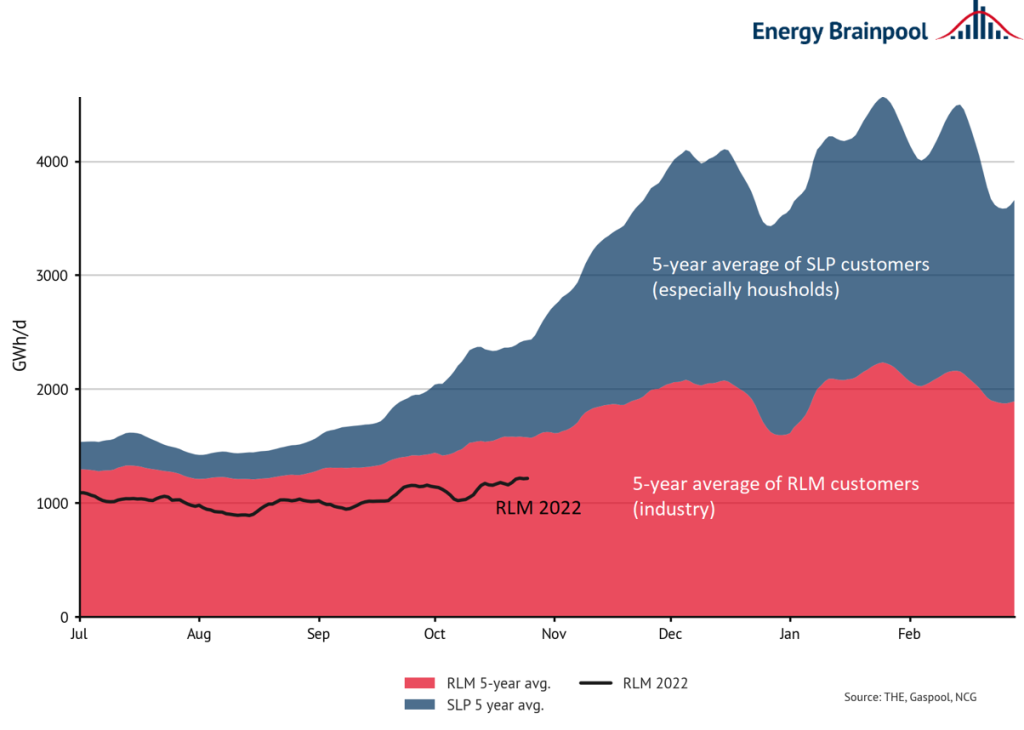 Figure 4: Gas demand over the course of the year in Germany by customer group (source: Energy Brainpool, 2022). 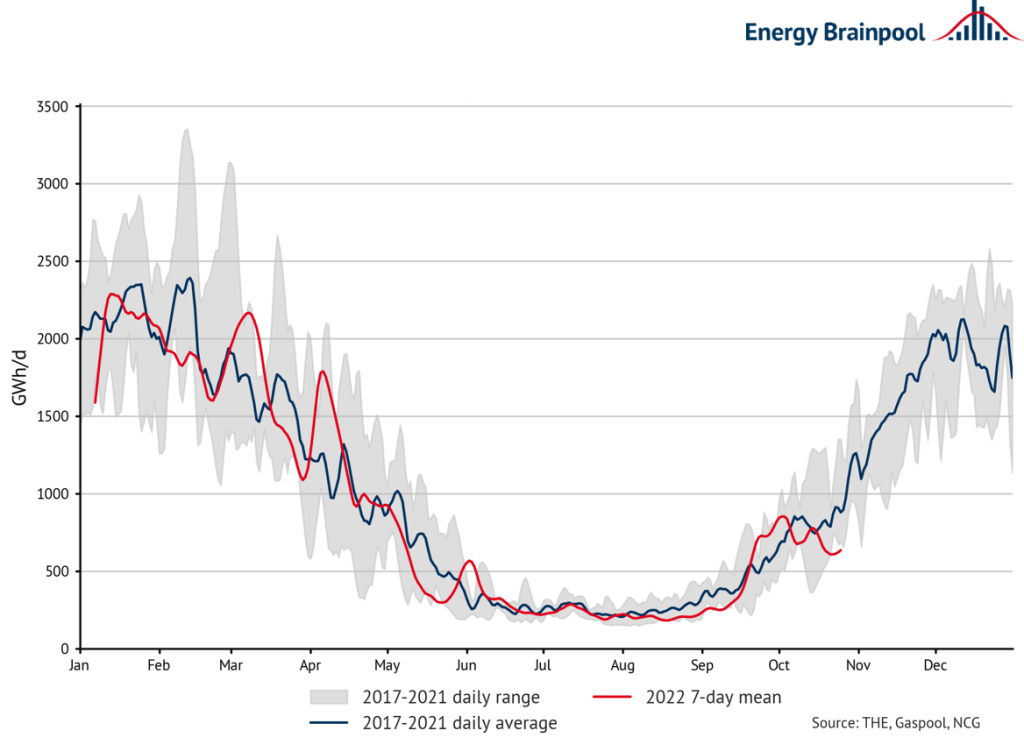 Lower consumption in recent weeks combined with high gas storage levels are currently leading to an interesting price differential between the short and long end of gas prices. In particular, the high gas storage fill levels hardly allow for high injections anymore. The incoming LNG supplies provide a good short-term supply. As these supplies now also coincide with October temperatures 3-5 degrees above normal, day-ahead prices for gas fell dramatically in October to less than 40 EUR/MWh in some cases. This is a price level from even before winter of 2021/2022 and the war in Ukraine (see Figure 6).

Figure 6: Gas prices at THE with increasing difference between front-month and day-ahead (source: BNetzA, 2022).

However, prices for long-term contracts in the winter months of December, January and February in particular are still far above the day-ahead prices at the end of October 2022 and hover at about 130-140 EUR/MWh. This means that market participants expect higher prices again in winter. With falling temperatures, gas will have to be withdrawn from storage facilities even with savings in heating consumption to ensure a balance between consumption and imports or gas production. During a cold spell at the latest, day-ahead prices are also likely to reach high levels again.

The gas supply situation therefore remains tense despite high storage levels, especially as soon as temperatures start to drop sharply. Despite high imports from other countries, gas must continue to be saved across all consumption groups to avoid shortages in a prolonged cold spell. Likewise, gas storage facilities should not be too empty next spring so that they can be refilled before the winter of 2023/2024. The situation on the gas market has indeed calmed down somewhat, but the all-clear is still a long way off.