A new study by the American Gas Foundation unpacks natural gas’ growing role in providing resilience to America’s energy and heating grids. The fuel has helped the grids perform under recent catastrophic events, and with increasing reliance on intermittent, renewable sources and increasing frequency of disruption, it’s important to understand how natural gas seals the vulnerabilities in our energy system. 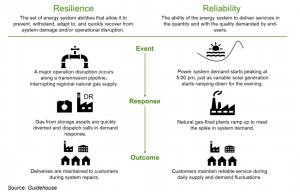 Consumers see the energy grid’s reliability in everyday activities. It ensures that the lights stay on after the sun has set and that the fridge stays consistently cool day in and day out. But resilience is what kept houses warm when the Midwest experienced freezing cold temperature during a polar vortex and what reduced the severity of California’s 2020 blackouts.

A major component of energy resilience is the availability and storability of the resource. Fortunately, the United States has an abundance of natural gas thanks to the fracking revolution that’s taken place since 2008.

Natural gas has served as an immediately available, low carbon power source, growing from 16 to 38 percent of U.S. electricity generation, while helping reduce the carbon footprint of the power sector year over year. And with natural gas being sourced from basins in Appalachia, the American Southwest and the Heartland, it has secured domestic energy security. According to the Energy Information Administration, the United States has enough natural gas reserves to meet demand for the next 92 years.

Nearly 3 million miles of pipelines link natural gas production to storage facilities across the United States, where large volumes of the resource are compressed. According to the study:

“This abundance and diversity of natural gas supply ensures that natural gas can continue to meet customer demand even during regionally isolated supply-side disruptions such as a major storm event. For example, limited supply interruptions during recent hurricanes demonstrates the value of shifting natural gas production from the Gulf of Mexico to geographically diverse shale plays and formations.”

The Role of Policymaker

Unfortunately, the frequency of these disruption events is increasing and it is important that policymakers and regulators can adapt. The AGF study makes clear that quick-to-start natural gas power plants are crucial for responding to these events, but the infrastructure must be built or expanded in many regions.

In periods of peak usage, natural gas-fired generation without specific pipeline agreements can experience a constrained supply. When this happened during a 2018 polar vortex in New England, prices for residential natural gas increased exorbitantly, resulting in residents paying the highest energy costs in the world at nearly $100 million more for energy than their seasonal average.

For policymakers looking to reduce carbon emissions and ensure affordability to their constituents, the study lays out how to restructure regulatory policies to include resiliency in their analysis:

“The current state market framework was designed to promote reliability and does not support the construction of assets whose primary function is to serve resilience, especially when the beneficiaries of that resilience are outside of the gas infrastructure-ratepayer ecosystem.”

If elected officials want to prepare for increased disruptions, their analysis should ultimately include resilience measures like high-pressure intrastate pipelines and increased storage assets, and consider energy system resilience as a measurable and observable metric that’s essential to planning for the future.

The energy system of the coming decades will require a diverse mixture of resources and a resilience to catastrophic events. The United States has the ability to meet these demands through the combination of natural gas and renewable energy sources, and that’s something that cannot be overlooked in policy development.