A lot of Americans prefer gas appliances, and for good reason: Natural gas is reliable, affordable, and for those that love to cook, it outperforms when creating their favorite dishes. Yet, a recent Mother Jones article attempts to make the case that somehow “the fossil fuel industry convinced Americans to love gas.”

The article misrepresents why natural gas became and remains the dominant energy source for homeowners, overlooking the crucial fact that the resource has been delivering the most affordable energy for decades, speaking directly to the pocketbook issues each household faces. In that conversation, electric appliances haven’t had a similar appeal.

Ads Market, But Products Must Deliver

Using examples from as far back as the 1930s, the author attempts to vilify the natural gas industry for marketing its product to consumers. Aside from a quick mention of the marketing by one electric appliance company, there’s no discussion that advertising was common for all energy sources as  American households began to switch in earnest from coal, wood and kerosene cook stoves.

Whether it be because of cost, availability, reliability, preference or advertising, as one of the charts in the article shows, since the 1950s there has been a steady increase in homes that use gas appliances. 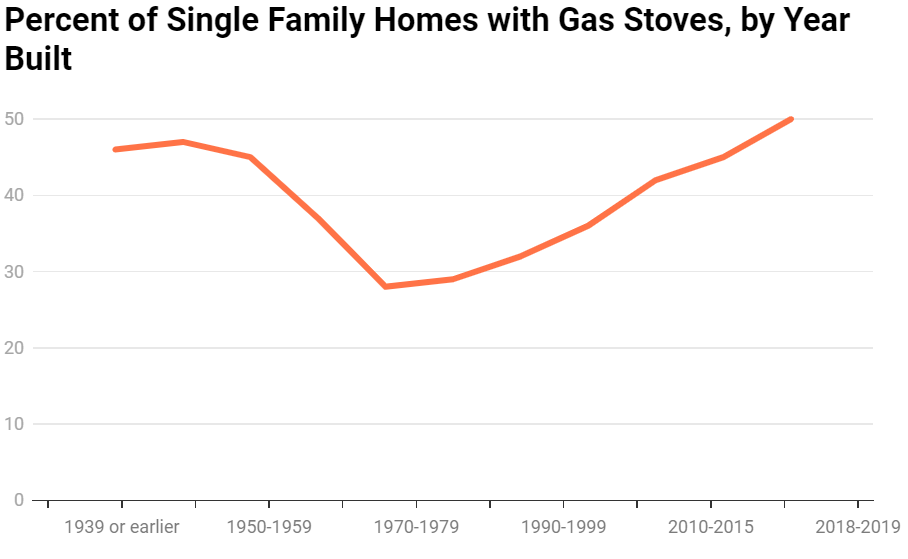 Cost Is A Major Factor

A quick look at historic energy prices from 1997-2010 shows that electricity costs have been significantly higher than that of their natural gas energy equivalent (MMbtu). When accounting for inflation, electricity prices during this period cost on average $31.85/MMbtu, whereas natural gas prices were one fifth of the price ($6.72/MMbtu).

The gap has only widened since 2010 with residential electricity prices trending upwards and natural gas reaching its lowest price in decades.

Reducing overall utility costs is a motivating factor for Americans’ purchasing habits and has swayed consumer choice for generations. A newly released Morning Consult poll shows that 76 percent of homeowners consider saving money to be the major influence when considering to purchase an electric appliance. Less than half said reducing their carbon footprint was the major factor in their decision.

California residents voiced a similar sentiment when a majority of residents said they were not willing to pay more for electricity to reduce their carbon footprint. And at the same time, policy decisions in the state have raised electricity prices, creating little incentive to electrify. According to Lucas Davis, Haas School of Business Professor at University of California, Berkley:

“Regulators can mandate and ban natural gas for new buildings. However, without additional policy and rate reform, California’s high electricity prices mean that electrification mandates will raise costs for households.”

Essentially, consumers are most concerned about being able to pay their bills.

In fact, when considering energy prices, climate, geography and housing characteristic, Lucas Davis’ working paper found that many homes are willing to pay to avoid switching to electric: 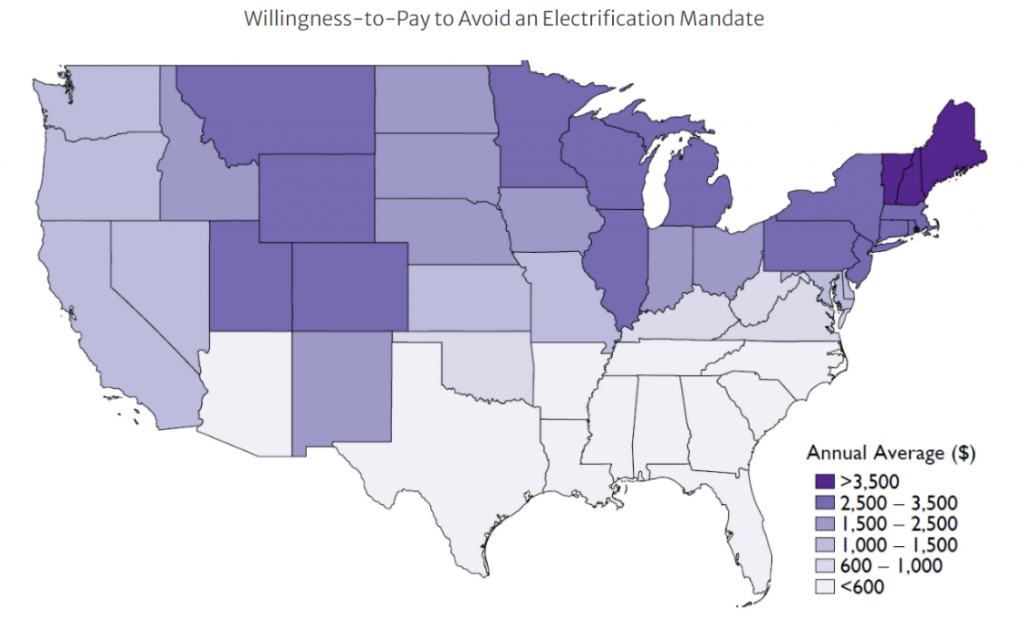 Natural gas provides effective, affordable energy in colder regions. In New York, for example, a 2019 study of heat pumps in the state found that “residential gas heating replacement scenarios do not at present succeed” the societal cost test, the indicator of the attractiveness from the perspective of society as a whole.

In areas along the sun belt, weather is fairer, and homes are more indifferent to natural gas than areas in colder regions. But until electrical appliances can match natural gas in societal tests around the country, they will continue to lack in appeal to most homeowners. As it stands, the cities passing electrification mandates are some of the wealthiest in the nation.

Natural Gas As A Climate Solution

The industry is working to address individuals’ primary need for affordability and their climate concerns, too.  Direct natural gas use will remain the most affordable option to homeowners, and its increased use for electricity generation is cleaning the grid and reducing the residential sector’s carbon footprint.

As a low carbon resource, the increase in natural gas consumption for electricity generation has led to the reduction of more than 2.8 billion metric tons of CO2 emissions between 2005-2018. This greater inclusion of the resource for power generation is providing reliable energy to back-up intermittent, renewable sources, allowing renewables to integrate into the power grid without disruption or spikes in prices. The combination of natural gas use and renewables has reduced the carbon footprint of residential electricity consumption by 25 percent.

If households can save an average $879 per year using natural gas compared to homes using electricity for those same applications, it is clear what people would prefer, regardless of advertising. Assuming otherwise says that Americans are beholden to advertising campaigns and underestimates their ability to make informed choices. Natural gas captured the American market because cost savings are an attractive feature in any appliance. Natural gas has been a model example in that regard, one that electricity hasn’t been able to replicate across much of the country.