Reducing dependence on Russian gas is the need of the hour. LNG terminals for liquid natural gas will soon also play an important role in Germany. The idea of ​​building import terminals for liquefied natural gas (LNG) on the German coast is several years old. However, political support for the construction of the planned plants in Brunsbüttel, Wilhelmshaven and Stade was limited. The investment decisions of the economic actors also dragged on for a long time, were put on hold or the planning was very slow.

Now everything has to happen very quickly at once. For this reason, we answer the most important questions in this article:

Why is LNG necessary?

The invasion of Ukraine by Russia has made it clear for all actors in Germany: diversification of gas imports is urgently needed. In addition, the high dependence on Russian gas can severely affect Germany's security of supply in the event of a supply stop.

Russia stopped gas supplies to Poland and Bulgaria at the end of April. In an analysis from March 2022 , we consider the German and EU-wide supply situation with different delivery scenarios for gas from Russia. It becomes clear that a supply gap can only be closed in the short term by reducing consumption. In the medium term, new regasification capacities for liquid natural gas will be needed in Europe and especially in Germany. As a result, Europe can make itself independent of Russian gas supplies.

Germany currently consumes around 90 billion cubic meters of natural gas every year. In 2020, more than half of this came via pipelines from Russia. The EU was also still heavily dependent on Russian gas in 2021, which accounted for 45 percent of imports. However, in the EU last year almost 15 percent of LNG imports were from the USA or Qatar, for example, as Figure 1 shows. Another 10 billion cubic meters came from Algeria via the Mediterranean (source: EU Commission and Reuters ). 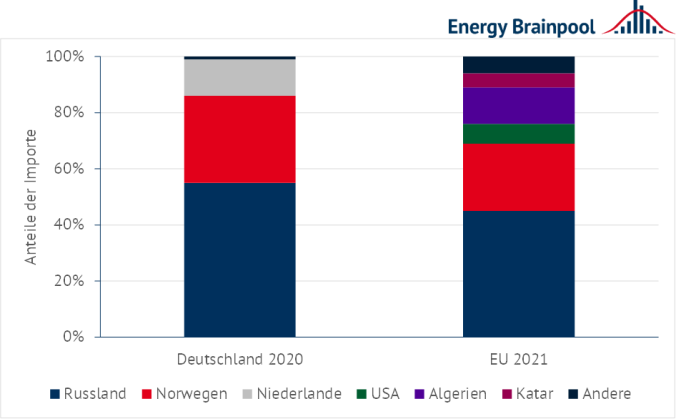 In order to reduce German dependency, LNG is to come to Germany at very short notice via floating terminals, so-called FSRU (Floating Storage and Regasification Units). First, these floating LNG terminals can receive liquid natural gas from an LNG tanker, which has been cooled to around -163 degrees Celsius. In a further step, the still liquid natural gas is regasified and then brought ashore via a connection pipeline. There it can be fed into the gas network. The plans for the larger landside LNG import terminals are also to be reactivated.

What is planned in the short term?

The construction of the facilities on land has yet to begin. Under normal circumstances, a time frame of five or more years is realistic for planning, approval and construction. For the planned LNG import terminals in Brunsbüttel and Stade, commissioning is therefore only likely to take place from 2024 or later, even with strong political support. The terminal in Wilhelmshaven, on the other hand, could regasify imported LNG from the USA or Qatar and feed it into the German gas network as early as winter 2023/2024. 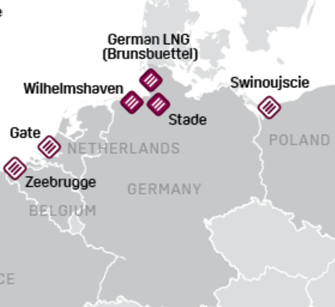 A number of FSRUs are said to be at sea off the German coast earlier. So far, Germany has reserved four special ships on the world market. The landing of the first liquefied natural gas is scheduled to take place at the turn of the year 2022/2023 from a floating terminal off Wilhelmshaven. Overall, it can replace up to 20 percent of gas imports from Russia. The first ramming - which is equivalent to a groundbreaking ceremony, just at sea - already took place on May 5, 2022. Another ship is planned for stationing in Brunsbüttel at the beginning of 2023 ( E&M , Tagesspiegel ).

How does it look in the medium term?

According to plans by the federal government, two more floating terminals are to be leased near Stade, Rostock, Hamburg-Moorburg and Eemshaven in the Netherlands and operated for a period of ten years. A total of EUR 2.94 billion from the federal government's budget is available for the procurement of the four terminals (source: BMWK , Tagesschau ).

The Federal Government is currently working flat out on an LNG Acceleration Act ( BMWK background paper ). It is intended to greatly accelerate the construction and operation of both floating and land-based terminals by shortening approval procedures and less stringent environmental regulations. At the same time, the approval of LNG import terminals will be limited to the end of 2040. If the plant operators submit an application for approval to convert the plants to the use of green hydrogen or other green derivatives by 2035, the terminals can continue to operate after 2040 (source: DUH ).

Capacities of existing terminals in Europe

LNG import terminals have existed in many European countries for a number of years, a total of 37, 26 of which are in EU member states. Between 20 and 30 further import terminals are currently being planned. The capacity of the continent's existing regasification terminals is almost 250 billion cubic meters per year (source: Chemie Technik ).

The capacities in Spain are particularly high at 60 billion cubic meters, since the Iberian peninsula is only very partially connected to the gas network in Central Europe. But the UK, Turkey and France also have significant LNG import capacities, as shown in Figure 3. Although countries such as Lithuania and Poland each only have a terminal of four or five billion cubic meters, they can obtain most of their gas requirements from them. 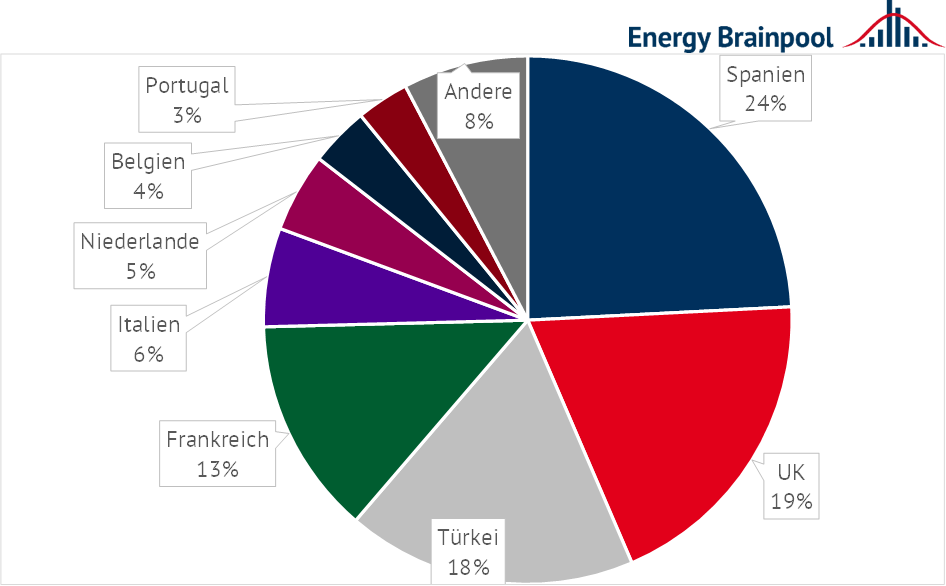 What capacities should the terminals in Germany have?

The planned terminals in Germany should have a considerable capacity. According to the BMWK in its second progress report on energy security, the four floating LNG terminals are to be gradually expanded to a capacity of 33 billion cubic meters per year by summer 2024. By the winter of 2022/2023, 7.5 billion cubic meters of LNG could be procured for the German market.

With the completion of the terminals in Brunsbüttel and Wilhelmshaven, each with around 8 billion cubic meters of regasification capacity, between 45 and 50 billion cubic meters of LNG could be delivered to Germany from 2026. This would catapult Germany to rank 2 or 3 of the largest European LNG importers. The possible imports would then correspond to the import of natural gas from Russia in recent years. Dependence on Russian natural gas could be reduced to just 10 percent as early as 2024 through further energy efficiency and saving measures (source: BMWK ).

Diversification with a long-term perspective

However, the chartering of the FSRUs and the construction of the new LNG terminals also raise questions. On the one hand, the expansion of new infrastructure for fossil fuels begins with partial government funding. On the other hand, overcapacities could arise that cement existing energy consumption patterns. Therefore, even in the extreme situation of a war, the triangle of objectives between sustainability, security of supply and profitability must be taken into account.

For this reason, according to the BMWK, the infrastructure and landside terminals in Germany should be planned and built in such a way that they are suitable for the import of green hydrogen or other derivatives such as green ammonia (source: BMWK ). The terminal in Wilhelmshaven planned by Uniper should either be built with a landing terminal for green ammonia or at least the conversion to green import products should be possible (source: Recharge ).

RWE and Gasunie are also planning to build the Brunsbüttler terminal in such a way that it can then easily be converted to import green ammonia. At the same time, a terminal for green ammonia is already being planned here next to the LNG terminal. Building on this, green hydrogen can then be produced from the green ammonia in a further step (source: RWE ).

What does this mean for climate protection?

Germany will continue to be dependent on energy imports from abroad in the future. For example, the import of green ammonia or hydrogen is particularly relevant for the decarbonization of industrial processes and parts of transport. The war in Ukraine threw old certainties overboard. The construction of LNG terminals can reduce dependence on Russian gas in the medium term. In addition, the expansion of this infrastructure must be designed in order to achieve medium- and long-term climate goals.