Orphaned wells have been making headlines recently as a potential source of methane emissions. The oil and natural gas industry and regulatory agencies have collaborated on identifying the number of these wells and finding solutions to the unique challenges they present, particularly since most of them were drilled in the 1800s and early 1900s.

Most recently, Reuters published an article claiming “more than 3.2 million abandoned oil and gas wells together emitted 281 kilotons of methane in 2018” in the United States with a price tag to properly plug them ranging from a whopping $60 billion to $435 billion.  And while no one is disputing that orphaned wells are an issue that needs to be addressed, recent surveys and reports put those numbers far lower.

One of the key issues with reports like Reuters’ recent article is that industry terms are often confused and interchanged, despite being unique and having somewhat separate challenges. The Interstate Oil & Gas Compact Commission (IOGCC) defines an idle well as an oil or natural gas well that is not currently in production and is also not yet plugged. The future outcome for an idled well could be that it is brought into production, plugged and abandoned, or even used for disposal. Most regulatory agencies set a timeline for how long a well may remain idled before it must be plugged. IOGCC defines orphaned wells as idled wells where the owner or operator is unknown. State agencies have varying definitions for orphaned wells and may call them abandoned wells, but it should be noted that the oil and gas industry often refers to any well that has been properly plugged as “abandoned and plugged.”

While there are rare instances of modern cases of idle wells entering an orphaned status, by and large the vast majority of these are from development dating back to the 1800s and early 1900s. For instance in Pennsylvania, which is estimated to have the largest number of orphaned wells in the country, the Department of Environmental Protection explains:

“Since the first commercial oil well was drilled in Pennsylvania in 1859, it is estimated that 300,000 oil and gas wells have been drilled in the state. Only since 1956 has Pennsylvania been permitting new drilling operations, and not until 1985 were oil and gas operators required to register old wells.” (emphasis added)

Thanks to modern record-keeping and regulation it is uncommon to be unable to identify the owner or operator a well.

What’s In A Number: Well Count

Reuters reports there are more than 3.2 million “abandoned” wells in the United States based on the 2020 U.S. Environmental Protection Agency greenhouse gas inventory (GHGI). EPA says there are roughly 2.6 million oil and 0.6 million gas “abandoned” wells. But, EPA’s definition of “abandoned” – much like the industry’s – includes all wells that are no longer in production:

And while Reuters does include an explainer sentence, it is buried below a graphic showing more than 3 million wells. EPA actually puts the number of orphaned wells – the ones it attributes the vast majority of the emissions to – at around 2 million.

Similarly, IOGCC conducted a survey in 2019 that asked states to respond with their numbers for documented and undocumented orphaned wells. IOGCC’s survey found that the total number of estimated orphaned wells in the United States ranged from 266,000 and 802,000, with 56,000 of those being documented. The total number of idled wells was 294,743, representing about 15.6 percent of the roughly 1.8 million wells that IOGCC estimates had been drilled and not plugged in 2018.

That would put the range for orphaned and idled wells, according to the IOGCC survey, at 560,743 to 1.1 million. 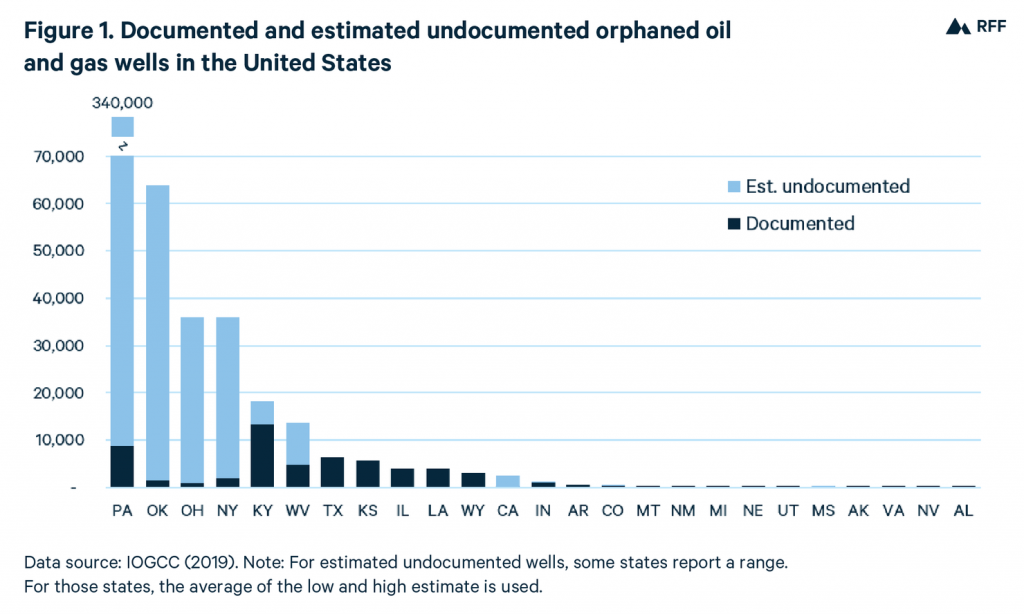 Source: Resources for the Future, 2020

What’s In A Number: Cost to Plug

Depending on where a well is located, how old it is and a host of other factors, the cost to plug a well can vary greatly. Reuters cites a 2019 Government Accountability Office report estimating that the cost to for reclamation (plugging wells) on federal lands ranged from $20,000 to $145,000. IOGCC’s survey found that the average cost per well for those plugged in 2018 ranged from $3,700 to $97,626, putting the overall average at $18,940.

Environmental think-tank Resources for the Futures’ Daniel Raimi recently testified before the Subcommittee on Energy and Mineral Resources of the U.S. House Committee on Natural Resources on this topic. Using the IOGCC’s documented orphaned well number of 56,000 – because those are the wells where locations are known – Raimi estimated a national average cost of $24,000 which would work out to a $1.4 billion price tag to reclaim and plug those wells.

Using Raimi’s national average, IOGCC’s high estimate including idled wells, and EPA’s orphaned well estimate, that would put the range to fix all estimated orphaned and idled wells between $26 billion to $48 billion. And while that certainly is not a small dollar amount, it’s much more attainable than the $60 billion to $435 billion estimate Reuters presented.

If estimating the number of orphaned wells is difficult, it goes without saying that calculating the emissions of these wells is also challenging. And while Reuters makes the argument that recent market conditions could result in more orphaned wells, EPA also explains in the GHGI that emissions from abandoned oil and natural gas wells declined from 2017 to 2018 “as a result of well plugging activities.”

There is still a long way to go in addressing the challenges of identifying and properly plugging historic orphaned wells, and it likely will be something that requires long-term solutions in individual states. But the fact that these emissions have been declining, even as more wells are retired, demonstrates that as the industry eventually abandons and plugs wells that are no longer profitable, they are doing it in a manner that is protective of the environment. According to IOGCC, 28 states reported plugging a total of 16,153 wells, including 2,372 orphaned wells, in 2018.

Importantly, that means that the modern U.S. oil and natural gas industry is using best practices to prevent further adding to a long-existing issue.