The scenario framework of the gas transmission system operator (TSO) for the network development plan 2022 - 2032 contains some interesting figures. There were over 100 project reports for hydrogen projects in Germany. With almost 25 GW of electrolysis capacity by 2030, these numbers exceed the plans of the many times over.

Hydrogen offers the possibility of decarbonising some sectors, especially industry and parts of transport. Hardly a day goes by without a report on a new hydrogen or electrolysis project. In another blog post, we have already reported on the German hydrogen strategy and the required ramp-up . In this blog post we want to take a closer look at the scenario framework of the gas transmission system operator (TSO).

In the scenario framework of the TSO Gas from June 2021 , the gas demand up to 2050 is estimated on the basis of various scenarios. That the FNB Gas chooses a scenario with very high demand for gaseous energy sources also in 2050 for its further considerations should come as little surprise. However, the bandwidths of the various scenarios are also very high. In the electricity industry, basically all players assume that consumption will increase. In contrast, developments in the gas industry are still unclear and also interact with changes in electricity generation and electrification in other sectors.

The scenarios shown in Figure 1 (source: FNB Gas) show possible developments in demand for gas in Germany up to 2050 in the scenario framework of the Network Development Plan (NEP) 2022-2032.

In further considerations, the FNB Gas mainly assume the dena TM95 scenario with very high gas demand and climate-neutral methane. The FNB Gas also looks at the NECP-KSP 87.5 scenario of the Federal Ministry for Economic Affairs and Energy (BMWi) for the climate protection plan. In the dena TM95 scenario, gas consumption even increases compared to today and will reach over 1000 TWh in 2050, whereas the NECP-KSP 87.5 scenario assumes a demand reduction of around 60 percent.

The breakdown of the different consumers in both scenarios is shown in Figure 2. The share of consumption in the household and tertiary, industry and transport sectors remains very similarly distributed in the dena TM95 scenario via climate-neutral methane and hydrogen up to 2050.

This is different in the NECP-KSP 87.5 scenario. Here, with 68 TWh, hydrogen will cover just under 20 percent of total gas demand in 2050. The degree of electrification is much higher in this scenario, while biomethane also plays a larger role.

The further development of gas consumption and the proportion of hydrogen will remain an important topic in the future, especially against the background of the Nord Stream 2 gas pipeline and the currently very high gas prices of over 40 EUR / MWh on the market. Since there was already criticism from environmental and energy associations when the scenario framework was drafted, it remains to be seen whether other scenarios will come to the fore in the final document of the network development plan in 2022.

The FNB Gas have also carried out a market survey for green gases in their new scenario framework. Over 500 project reports were received within four months, including 102 electrolyser projects in Germany. Despite the uncertainties of such a market survey, the feedback shows that a very high number of projects are being considered by market players.

The announcement of the planned electrolyser capacities of 21.5 GW for the year 2030, for example, exceeds the target figures of the National Hydrogen Strategy of 5 GW by a factor of four. Figure 3 compares the reports from the TSO Gas market survey with the goals of the National Hydrogen Strategy and the assumptions of the transmission system operators (TSOs) in the Network Development Plan for Electricity 2035. 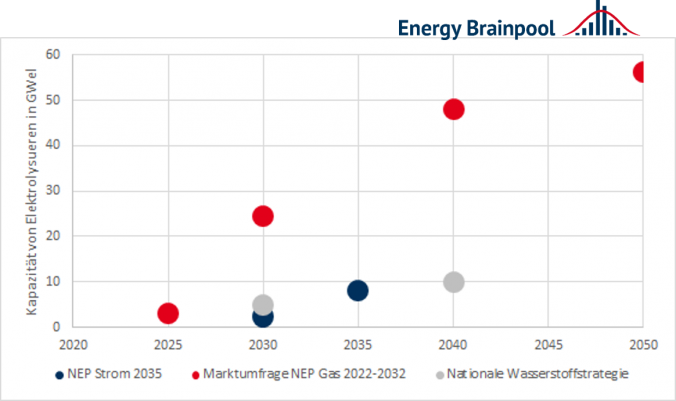 The assumptions of the TSOs and the National Hydrogen Strategy are far behind the figures that the TSO Gas received from the market survey. The range of 5 to 24 GW of electrolyser capacity in 2030 and between 10 and 48 GW in 2040 shows the considerable differences.

However, those responsible for the project must deliver letters of intent with concrete figures to the gas FNB by October 21, 2021. Only then does it become clear which projects are likely to be implemented. It can be assumed that not all projects will enter the implementation phase and that the numbers from the market survey by FNB Gas will decrease.

As shown above, the assumptions on gas demand for the coming decades differ widely in various studies. The possible proportion of hydrogen in gas consumption is between 20 and 50 percent. These great uncertainties in the planning of requirements for the network infrastructures are to be reduced in joint network development plans between the TSOs and the TSO Gas.

At the same time, the market survey in the course of the gas network development plan 2022 - 2032 shows the great interest of energy industry players in hydrogen projects. Here, too, a more refined analysis must make more precise estimates. In addition, only CO 2 -neutral or -negative hydrogen has a positive effect on the climate. Therefore the regulations regarding the definition of green hydrogen in the EEG and the adjacent regulations are of great importance.

Simon, unfortunately none of the projections for integration of clean hydrogen are supportable. They come from "Energy Brainpool", a marketing company that produces research-for-hire (aka, advertising) for Germany's natural gas industry.

The object is to dangle a green carrot in our faces to distract from the fact hydrogen is, among a litany of other "renewable" scams, just another fossil fuel.

You are wrong on some things here:
The projections do not come from Energy Brainpool, but from the natural gas network development plan for 2032. I just summarized the points the natural gas grid operators made in their latest planning document (which is also not the last one for this 2032 timeline).

Furthermore if you would check on Energy Brainpool a bit more thoroughly you would notice that they are clearly more on the green electricity (albeit of course no nuclear) train than on the gas one.

Simon, I admit I didn't look into which train Energy Brainpool was on, but if they are on the hydrogen track they should get off at the first stop and return to the station.

Hydrogen as a fuel is, every step of the way, a creation of the natural gas industry. There is no valid environmental or thermodynamic reason for using hydrogen as a fuel:

1) It's highly combustible. In the presence of any oxygen and any spark or other source of ignition it explodes violently.

2) It's extremely energy-diffuse. It requires liquifaction by refrigerating to -253°C, or compression to 10,000 psi, to be practically transferred to point-of-use.

3) Using it as a fuel creates more emissions than burning the natural gas from which it's made. Possibly the most egregious deception of all is that using hydrogen made from methane as a fuel, on a life-cycle basis, ends up creating more carbon emissions than simply burning the energy-equivalent amount of methane.

Hydrogen is nothing more than methane (aka natural gas) re-packaged to look "green".