The European Commission’s strategy document adopted on October 14th reemphasised the importance of the EU’s aim to be ‘climate neutral,’ or a net zero emitter, and therefore to focus on methane emissions. As earlier noted by insiders, the lack of universal monitoring methods is currently hampering policy initiatives to contain methane emissions in energy sectors. Indeed, estimates can easily vary up to a factor of 2 according to different methodologies. Partly for these reasons, the new strategy primarily focuses on voluntary mechanisms, business-led initiatives, as well as on the international cooperation driven by the EU's soft-power.

With little doubt, the EU’s ambition on methane emissions abatement will impact the discussion on gas flaring. As every oil and gas well contains various gaseous hydrocarbons, usually called associated gases, upstream producers tend to practice gas flaring in view of a better optimisation of the extraction of commercially viable products. Even though gas flaring generates more carbon dioxide than methane, scholarly studies reveal that a large part of upstream methane emissions occur when companies get rid of associated gas. Hence, gas flaring reduction would equate to pro-climate modernisation as the most valid alternative to the current practices across hydrocarbon sectors.

Gas flaring remains difficult to estimate since companies avoid disclosing full volumes of the flared gas, which makes any accurate estimate more uncertain. The most accurate methods rely on observation by stellites. For example, in Russia -  the world biggest producer of flared gas - data collected from satellites have oftentimes been twice higher compare to those provided by the national regulator. Yet, data collected by satellites can still provide different estimates of the volumes of flared gas at local levels.

Russian regulation on gas flaring reduction has been rather ambitious. Even despite the penalty mechanisms against the practice, smaller oil producers often prefer to flare rather than to introduce capital-intensive mechanisms for either reutilisation or reinjection of associated gases  into the wells. Thus, gas flaring rates revived across the country’s upstream despite national targets to abandon the environmentally harmful practice.

Meanwhile, Russia is not the only country where gas flaring rates have increased. World Bank’s global gas flaring tracking report of 2019 reveals an increase of gas flaring rates across all the biggest oil and gas procurers with a minor exception of Iran. The WB data also reveals a rapid growth in gas flaring in the US throughout the last decade.  The associated gas boom that accompanied the US shale oil revolution drove American hub prices to bargain-basement levels. Flaring might come as a more attractive solution for businesses amid low prices. 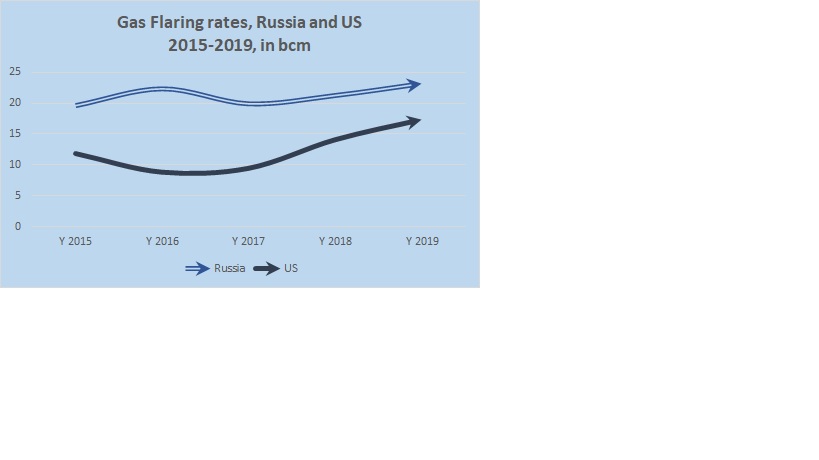 European gas markets attract Russian and American companies alike. However, gas flaring is usually practiced by smaller companies who would seldom achieve export capacity. If the EU introduce either market incentives or financial penalties, it may still deal with larger players who have a better environmental record. A question will arise: how to move forward with EU market and regulatory mechanisms favouring the  cleanest gas suppliers to incentivise gas flaring reduction beyond the European market?
P.S. Comments and opinions are very welcome!

I'm curious what the international impact would be about flaring in non-EU states. Obviously a flaring regulation in the EU won't impact how U.S. gas companies operate, and if anything their ability to continue flaring may give them an operational advantage in terms of not having to deal with those costs. But do you think there would be any positive international 'peer pressure' if you will? Pressure for other countries to follow suit in regulations? Or at least some sort of learning curve whose successes in preventing flaring more effectively can at least be exported to other regions?

Thanks for your comments! So far no legally binding international mechanisms exist. A soft-law with voluntary and declaratory objectives has been organised by the World Bank programme that I quote in the text. A lot of pressure exists to reduce funding for gas flaring reduction because technically you invest in fossil fuels. The European Commission halted its participation in the programme in 2016 for example.

The good news here is that there is finally some attention being paid to methane emissions in the EU. The accompanying article to Andrei´s post is very welcome.

Typically, it is mostly illegal (and stupid) to vent methane in the North Sea.  However, there are exceptions, especially in emergency situations.   But, as the author points out, a measure of methane leaks is "normal" (no seal is perfect) and, for example, methane is purged from tanks that are filling with oil.

I think this report is representative of effective efforts that have begun to minimize leaks, venting and flaring in the North Sea.  IR cameras for detecting leaks and drones for deploying them  are becoming widely available.  Pilotless flare technology is also more common.  What is lacking is sufficiently increased regulatory insistence on utilizing available technology and reporting and reducing emissions.

The US regulatory system fails to even acknowledge that methane flaring, venting and leaking is even undesirable, let alone illegal, unhealthy, unsafe, financially unsound and environmentally damaging.  In fact, the present regulatory regime in the US tacitly encourages such practices in an effort to maximize oil production in the short term.

Thanks for your remarks! Indeed, flaring generates more carbon dioxide than of methane. Thanks for the insights about US and the North Sea. Would you tell us about penalty mechanisms in North Sea? as I observed in Russia's case, many small oil producers prefer to pay a fint rather than investing in reutilisation/reinjection

"The US regulatory system fails to even acknowledge that methane flaring, venting and leaking is even undesirable, let alone illegal, unhealthy, unsafe, financially unsound and environmentally damaging."

Similar to the solar and wind industries, which fail to even acknowledge their dependence on unhealthy, unsafe, financially-unsound and environmentally-damaging methane.

"But, as the author points out, a measure of methane leaks is "normal" (no seal is perfect) and, for example, methane is purged from tanks that are filling with oil."

No measure of methane extraction is "normal"  since 1988, when it was confirmed as a source of global warming.