EIA: U.S. Oil and Gas Will Remain Critical Through the Next Thirty Years

The EIA’s latest Annual Energy Outlook (AEO) forecasts a long and steady future for the U.S. oil and natural gas industry and a positive picture for U.S. energy exports through 2050.

While the report acknowledges that varying policies and regulations will shape this long-term forecast, it also suggests that pre-pandemic energy demand levels will return sooner than expected. This, however, will depend mostly on how quickly the U.S. economy recovers.

Let’s take a look at the report’s most promising insights on the long term: 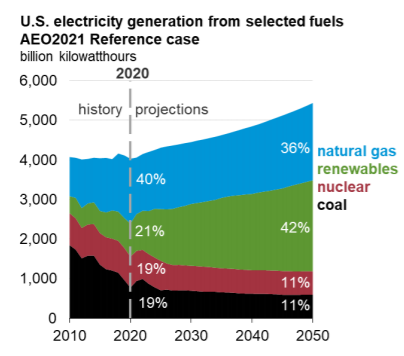 Natural gas’ bright future is based on two key assumptions. First, it will continue bringing balance and reliability to the electricity sector. As renewables become a prominent source for generation, the question of intermittence remains.

Natural gas has played a vital role in adding flexibility to the power sector while incorporating renewables to the electricity matrix and, according to the report, it will continue doing so. The AEO 2021 explains that natural gas-fired generation will “help balance the intermittent output from wind and solar generators” within the next 30 years.

Second, natural gas will  remain an affordable energy source. Natural gas will play a crucial role because it is one of “the most economically attractive generating technologies when considering the overall cost to build and operate, as well as the value of the plant to the grid,” according to the report.

According to the AEO 2021 reference scenario, not only will oil and gas production recover to 2019 levels within the next two-to-three years, but in the long-term, both crude oil and gas production are expected to maintain a steady growth. Thus, the U.S. net exporter title is unlikely to go away anytime soon as the AEO predicts the United States will export more energy than it imports through 2050.

Shale development will continue to be responsible for driving future growth, particularly from two basins: the Wolfcamp play in the Permian Basin and the Bakken in the Williston Basin. 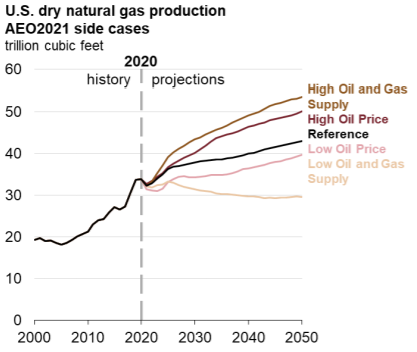 On the natural gas front, again, shale plays will play a key role in driving production up between 2020 and 2050, particularly from the Appalachian Basin.

AEO 2021 also confirms that U.S. manufacturing industries will continue to rely on natural gas in the long term given its affordability and ample supply.

One industry that will benefit particularly from natural gas’ steady growth is chemicals, which use natural gas as both feedstock and heat input. Chemicals will be responsible for “almost half of the growth in industrial natural gas demand,” the report states. The U.S. chemical industry is not only responsible for the production of petrochemicals, resins and plastics, but also methanol, fertilizers and hydrogen, representing a key component for the U.S. economy.

The other key driver of natural gas growth is LNG. Global gas demand is expected to grow exponentially, and while the AEO 2021 takes a more conservative approach with its LNG forecast, it expects U.S. LNG exports to more than double just in the next nine years.

The post EIA: U.S. Oil and Gas Will Remain Critical Through the Next Thirty Years appeared first on .