As the country begins to hunker down for the winter and an expected COVID-19 caseload spike, government data shows that natural gas is overwhelmingly the most affordable fuel for home heating.

The report from the Energy Information Administration is a sharp rebuttal to the growing push by elected officials across the country to transition homes to electric heating, which will cost residents more than twice as much as natural gas to stay warm for the winter.

EIA states that the price for heating fuels will be high this year because “NOAA’s forecast for this winter indicates temperatures could be colder than last year” and will increase because “more people are working and attending school from home this year,” due to the pandemic.

This unique scenario underscores the value of natural gas, which EIA reports will cost significantly less than electricity:

“Nearly half of all U.S. households heat primarily with natural gas. EIA expects households that use natural gas as their primary space heating fuel will spend $572 this winter, up 6% from the amount they spent last winter.”

In a sharp contrast, electricity will be a much more expensive option:

“EIA forecasts that households heating primarily with electricity will spend an average of $1,209 this winter on their electricity bills, which is 7% higher than the typical bill last winter.” 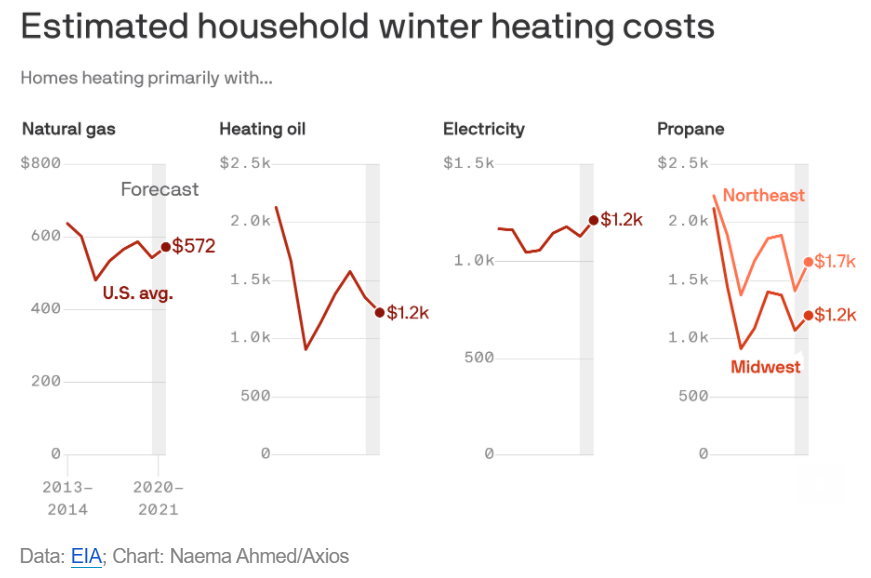 And EIA’s own chart shows that natural gas has been more affordable than electricity for winter heating for years: 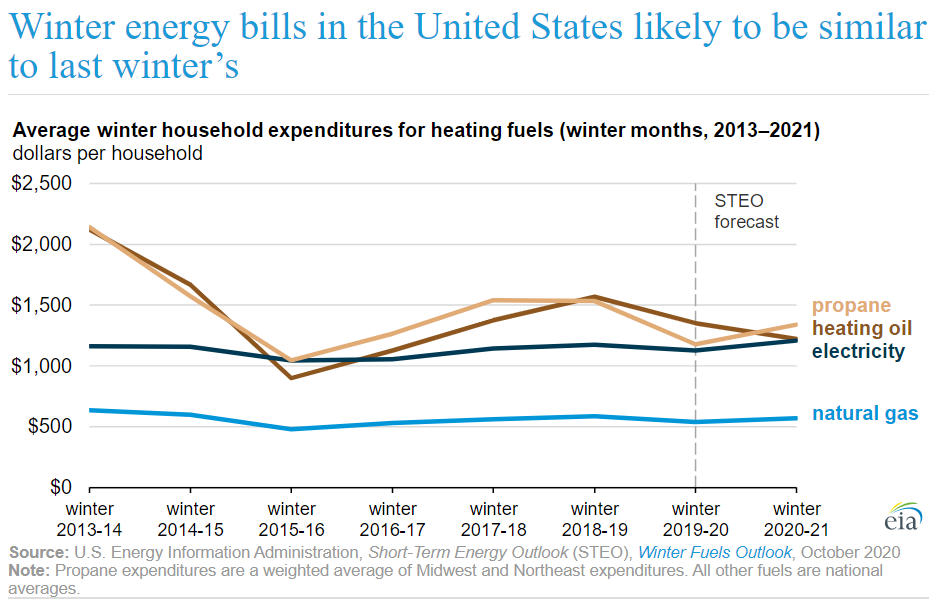 The EIA’s data runs counter to the message pushed by anti-natural gas groups and government officials who have said that electricity will save consumers money.

The Rocky Mountain Institute, a nonprofit pushing to ban natural gas use in buildings, acknowledges that electrification will be “more expensive for most existing natural gas customers,” but still claims that their data somehow shows “electrification of space and water heating and air conditioning reduces the homeowner’s costs over the lifetime of the appliances when compared with performing the same functions with fossil fuels.”

Even with the data showing that natural gas is the more affordable fuel, a number of cities have pushed natural gas bans. Last year, the city council in Berkeley, Calif. voted to ban natural gas hookups in new buildings – a move that’s been followed by several other cities in California along with Brookline, Mass. Seattle considered its own natural gas ban, but backed off after opposition from business leaders and labor unions.

Natural gas bans might be popular in a few cities with higher-income households, but the policy would have a devastating effect on low-income communities who bear a disproportionate burden for energy costs. It’s why progressive leader Jesse Jackson has pushed for a new natural gas pipeline to be built that would service a community in Illinois. Axios reported:

“However, he said, the people of this community — called Pembroke — have no gas at all and are paying exorbitantly high prices to heat their homes with propane. … ‘When we move to another form of energy, that’s fine by me, I support that,’ Jackson said. “But in the meantime, you cannot put the black farmers on hold until that day comes.’”

The post EIA: Natural Gas Is The Affordable Option For Winter Heating Needs appeared first on .