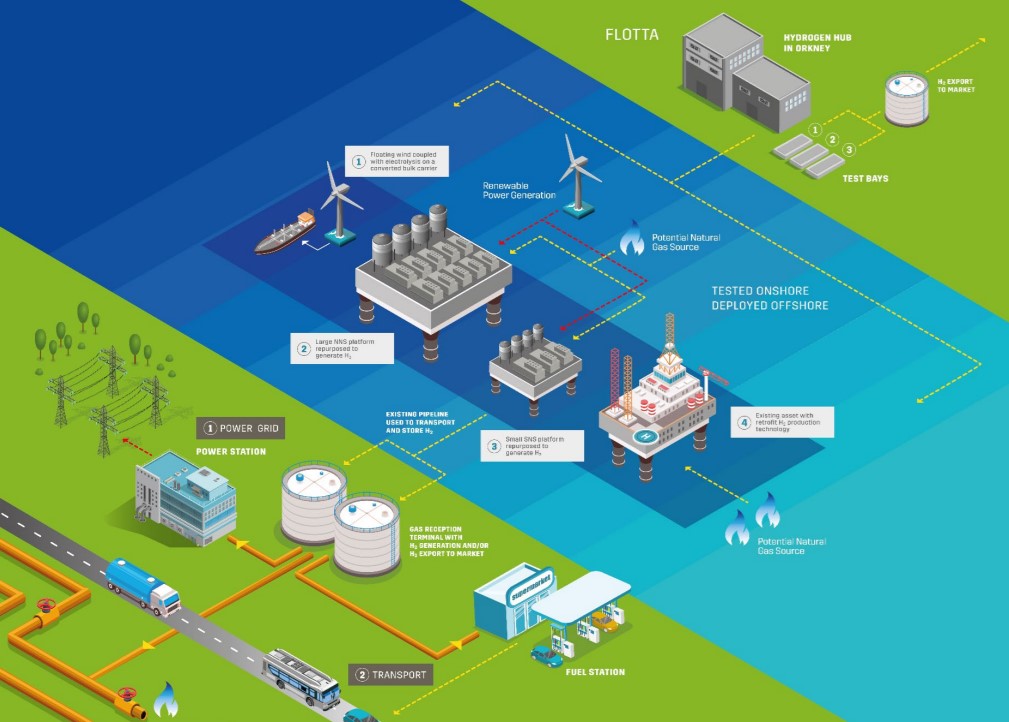 • Market for Offshore Hydrogen: Addressing future energy requirements will be challenging and the UK should make the most of all available infrastructure. Considerable opportunity exists to re-purpose offshore assets for hydrogen service upon cessation of production of oil and / or gas. • Hydrogen Production Technologies: Four technologies have been identified as suitable for hydrogen production offshore.

Those are Steam Methane Reforming with Carbon Capture and Storage, Gas to Graphene technology, PEM electrolysis and Alkaline Electrolysis. Common to all is the need for further containerisation and certification for unmanned offshore deployment. • Scenarios for Offshore Hydrogen: Utilisation of offshore assets has resulted in four scenarios being identified for hydrogen production. These include full re-purposing of asset topsides (large and small), retrofitting to operational assets and harnessing wind and wave resources for electrolysis. A large offshore asset completely re-purposed for hydrogen could produce circa 20,000kg per day of hydrogen.

• Pipeline Re-Use for Hydrogen Service: The Phase 1 project suggests that approximately 30% of the existing pipelines could be repurposed for the transportation of hydrogen. The initial study also found that a small subset of the pipelines could be used to transport CO2. Both of these findings require further work

• Hydrogen Hub Orkney: The cost for construction of the H2O will be circa £6.3m. The H2O is expected to be operational in 2021 and could be profitable within one year of operation. It will support the development of all hydrogen technologies, in addition to those specifically identified in this project. Re-use of offshore infrastructure generates several commercial opportunities to both produce hydrogen at scale and potentially at lower cost. Part of the cost saving includes extension of asset life, deferment of decommissioning costs and the provision a low cost, medium volume hydrogen storage mechanism. The HOP project demonstrates that there is a viable pathway to produce hydrogen at scale, utilising existing offshore infrastructure at a cost competitive with existing technologies. This can be done without the need for the additional investment required for CO2 transportation and sequestration

Audra commented on ...
SOUTH AFRICA’S FUTURE DEPENDS ON EMBRACING THE GREEN REVOLUTION
It's great to see some international posts in the community - South Africa is one I do not see a lot of coverage on! Thanks for your...
Energy Central Jobs
Featured Jobs
More Jobs