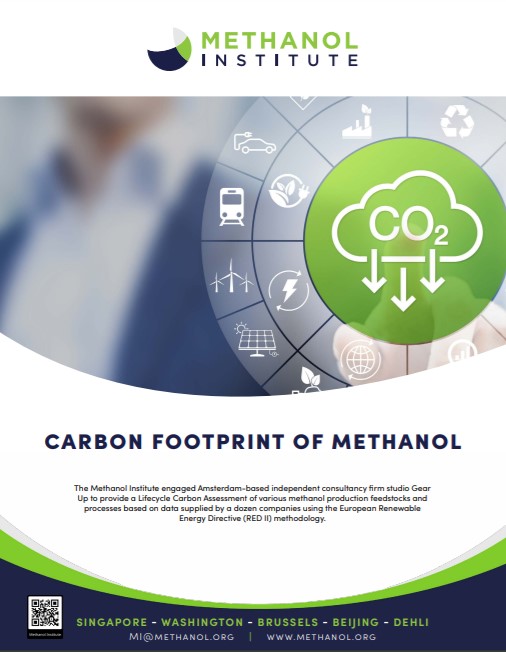 The carbon footprint of methanol depends on the feedstock and the production pathway, taking into account all the emissions caused directly by the supply chain and by energy and materials used in the supply chain. A core element of the study is based on the carbon balance of methanol production: the calculation of how much carbon enters the facility via feedstock and fuel, and how much leaves via the products (methanol), while assuming that the difference leaves the facility principally as CO2 .

• The majority of emissions in fossil pathways concern the stoichiometric end-of-life emissions, when using methanol as a fuel for internal combustion engines in cars, trucks, buses and ships. In pathways based on renewable feedstocks these emissions are climate neutral resulting in a significant reduction in overall climate emissions as the carbon footprint greatly improves.

• Variations within feedstock in the same category, technological differences in the installation set-up, and supply chain differences cause a significant difference in the lifecycle carbon footprint results.

• Due to the differences in outcomes one should not apply default carbon footprint factors for fossil or renewable methanol or even per feedstock category. Instead, the carbon footprint of methanol should be measured and certified to account for individual plant-specific differences – as is advised for any fuel.

• Most methanol is currently produced from natural gas, where natural gas is used both as a feedstock and as a process fuel. CO2 emissions from the facility are accounted for by using a carbon mass balance methodology. Modern facilities today produce methanol with an estimated carbon footprint of about 110 g CO2 eq/MJ, which is higher than what was considered state-of-the art two decades ago, of about 97 g CO2 eq/MJ, most likely because the insight in carbon accounting has improved with data in the current study. The footprint is especially sensitive to the source of the natural gas. When sourced from the less carbon emitting sources of natural gas, the methanol supply chain emissions can decrease to about 103 g CO2 eq/ MJ. When exhaust CO2 is recycled back to the methanol reactor, the production of methanol increases and facility emissions decrease, and as a result the lifecycle emissions per MJ of product decreases to 93-101 g CO2 eq/MJ. These results are between 4 g CO2 eq/MJ better and 13 CO2 eq/MJ higher than the value used in calculations by EU Joint Research Centre JRC under RED II [EC JRC 2017a]. • Production from coal only takes place in China and has a higher carbon footprint of nearly 300 g CO2 eq/ MJ, due to large emissions associated with both the mining of coal and the methanol conversion process.

• Production from renewable sources, such as from biomethane, solid biomass, municipal solid waste (or MSW, which contains a considerable fraction of organic waste), and renewable energy, has a low carbon footprint. Most of these pathways achieve 10-40 g CO2 eq/MJ, and some pathways even have negative emissions (-55 gCO2 eq/MJ for methanol from biomethane from cow manure) which means effectively that CO2 is removed from the atmosphere or that the pathway avoids emissions that would have otherwise taken place in other processes.

Audra commented on ...
Uncovering the Lessons of Solar Adoption from Batman: Overcoming Fear and Embracing the Benefits
David - I love the analogies you bring to your posts -they make for an interesting read! Thanks for adding some "spice" to our community!
Energy Central Jobs
Featured Jobs
More Jobs