Analysis: Federal Lands Orders Will “Have A Major Impact On Wyoming,” Western States

President Biden’s executive order suspending oil and gas leasing on federal lands and waters and delaying permitting decisions for existing leases would have “a major impact” on Western states. According to new analysis commissioned by the Wyoming state government, a permanent federal leasing ban or moratorium on federal permitting would decrease energy production in the West, leading to higher energy prices, reduced employment and state revenues, and increased emissions.

“This EO can have a major impact on Wyoming and other western states where a significant portion of oil and gas development and production comes from federal lands.”

Here are some of the key takeaways:

Among the most immediate effects of a permanent federal leasing or permitting moratorium would be decreased drilling and production. This would be seen relatively quickly in terms of drilling levels, which are predicted to drop by as much as 35 percent by 2030 (some 1,500-1,600 wells). For each well that is not drilled, states will lose out on revenues from permitting, sales taxes and other development expenses.

These lost revenues add up:

“Reduction in oil and gas drilling on federal lands would result in a $14 billion per year decrease in expenditures associated with drilling activity by 2030 in the six western states.” (emphasis added)

In Wyoming, drilling would decrease 28 percent by 2030, and 43 percent by 2050. This would be only part of a broader decrease in American production. The report predicted that:

“Without an increase in oil and/or gas prices, U.S. oil and gas production would decrease by 21 percent to 34 percent by 2030.”

All told, state revenues in the six states studied would decrease by more than $6 billion per year by 2030, effects that would be felt immediately under a federal leasing ban and more gradually under a permitting freeze. 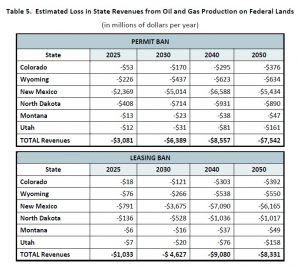 Though a federal leasing ban would have severe negative impacts on American energy production, it would do little to reduce the country’s use of fossil fuels and in fact could increase overall emissions:

GHG emissions from oil production are predicted to increase by the equivalent of 15 to 110 million metric tons of CO2 annually, depending on the country from which the oil was imported.

Previous studies have shown that banning fracking on federal lands would hurt western states’ economies, and this analysis further shows the lasting harm the president’s executive orders would have on Wyoming and other states in the west if the federal leasing ban continues long-term: lower taxes, lost jobs, and increased global emissions.

The post Analysis: Federal Lands Orders Will “Have A Major Impact On Wyoming,” Western States appeared first on .