“How Fracking Has Contributed To U.S. CO2 Emission Reductions” Since 2008, an outstanding achievement in U.S. energy has occurred with barely a whisper from the news media. Electricity prices have plateaued to a very small annual growth rate, while at the same time U.S. CO2 emissions have been on a downward trajectory. What is the reason for this monumental, but un-noticed and un-celebrated change?

Hydraulic fracturing, or fracking, in tandem with horizontal drilling, is perhaps the most important energy discovery in the last half century. This technological breakthrough to access tight oil and gas-bearing rock formations has lowered energy prices, raised domestic energy security, while lowering CO2 emissions.

In this article, we will look at the three key positive impacts from fracking for the U.S.: 1) lower electricity price inflation rates, 2) increased natural gas production and more stable gas pricing, and 3) lower CO2 emissions. 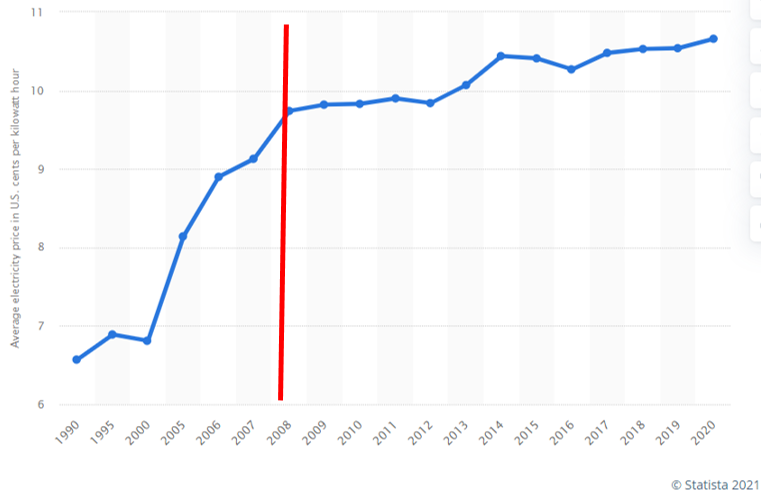 Without the advent of fracking, and the lowering of the annual electricity price inflation rate, the U.S. consumer would have paid a total of $479.11 billion more in electricity costs from 2008-2020.

Graph 2 depicts a decided increase in the amount of natural gas produced in the U.S. since fracking started in 2008. 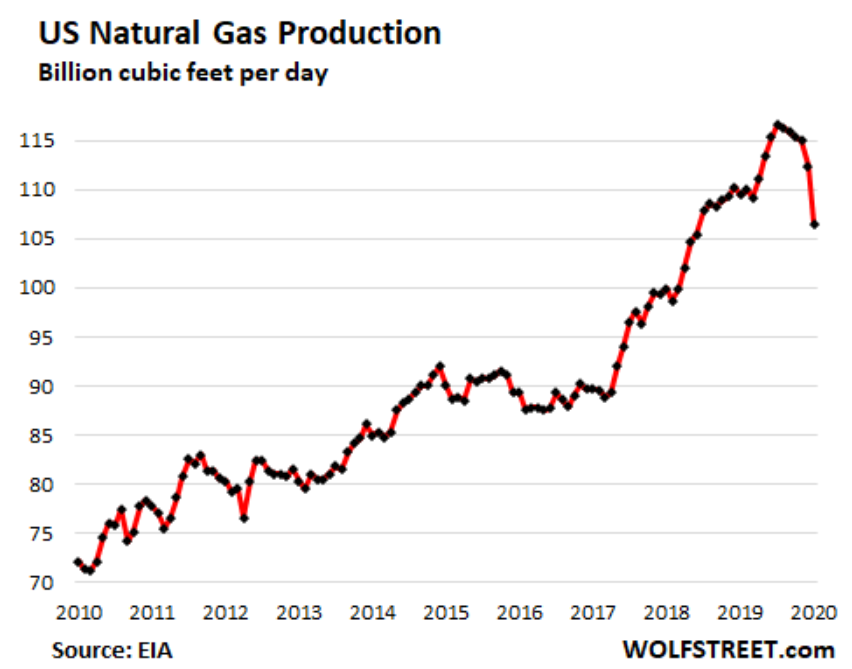 Coupled with increased, abundant, and relatively-cheap natural gas, the fracking revolution changed the economics for coal-fired vs. gas-fired electricity generation as shown in Graph 3. Follow the change in coal-fired vs. gas-fired as a source for generation starting in 2008. Subsequent to 2008, coal’s share is fairly-consistently in decline, while abundant, cheap natural gas’s share is increasing. 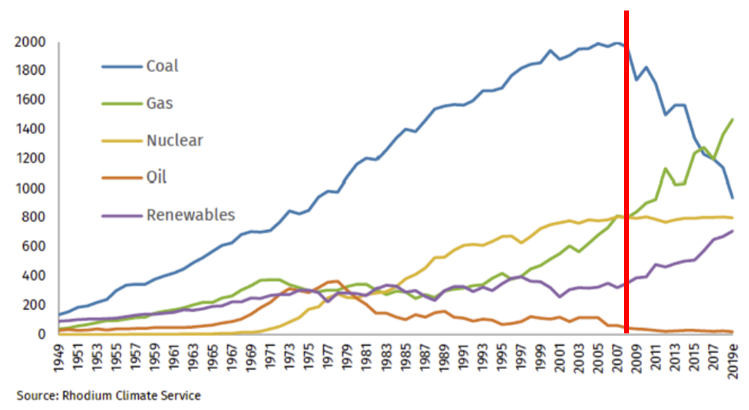 As the natural gas supply has increased since 2008 due to fracking, we also notice a decided dampening of spot natural gas prices as shown in Graph 4. 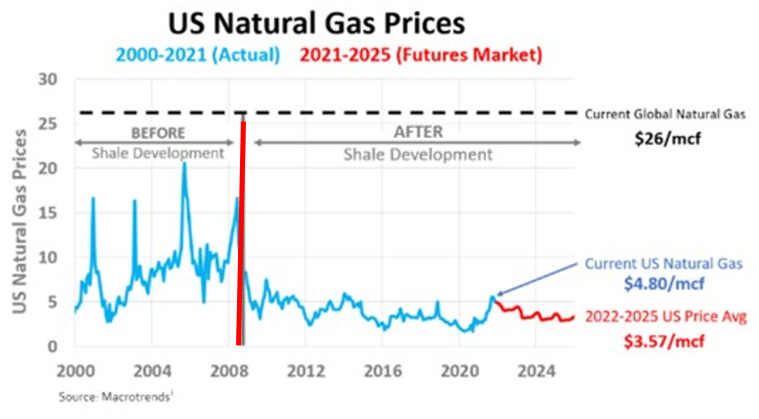 The objective of the Paris Agreement and other prior meetings was to reduce CO2 emissions from all nations in the world. ‎Despite optimistic pronouncements of future performance, we never see an audit of promises vs. performance in CO2 emission reduction by those same countries.

One of the largest impacts from natural gas fracking has been the reduction in energy-related CO2 emissions by the power industry in the U.S. as shown by Graph 5. 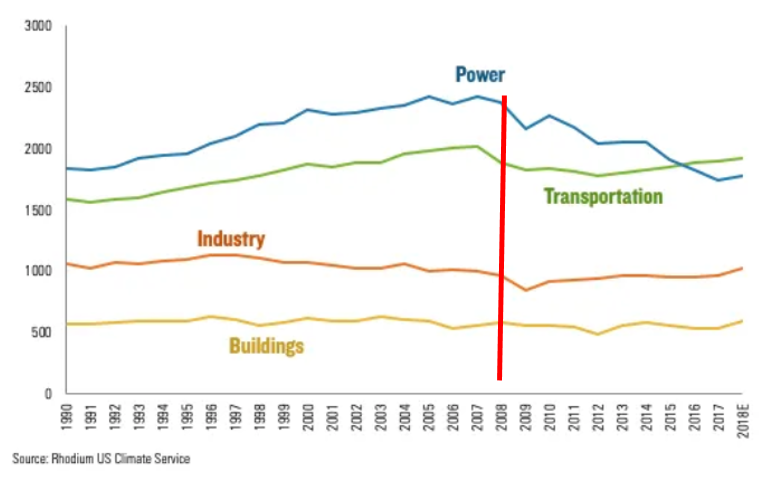 Graph 6 depicts that CO2 emissions from energy consumption in the U.S. peaked in 2008, almost simultaneously with the advent of fracking in the U.S. 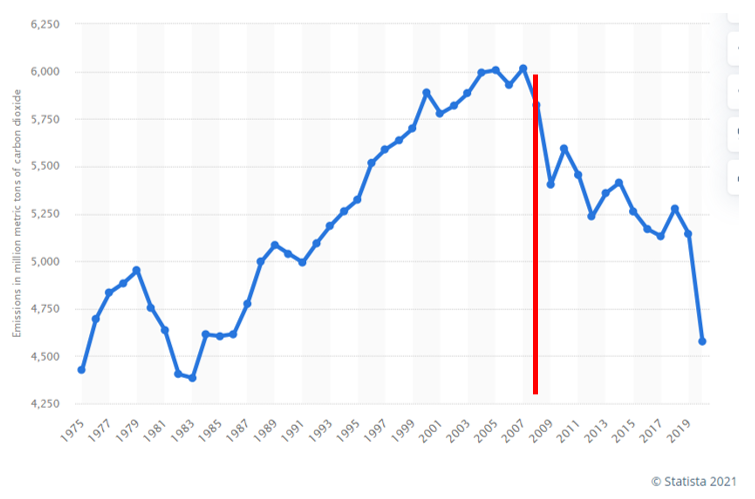 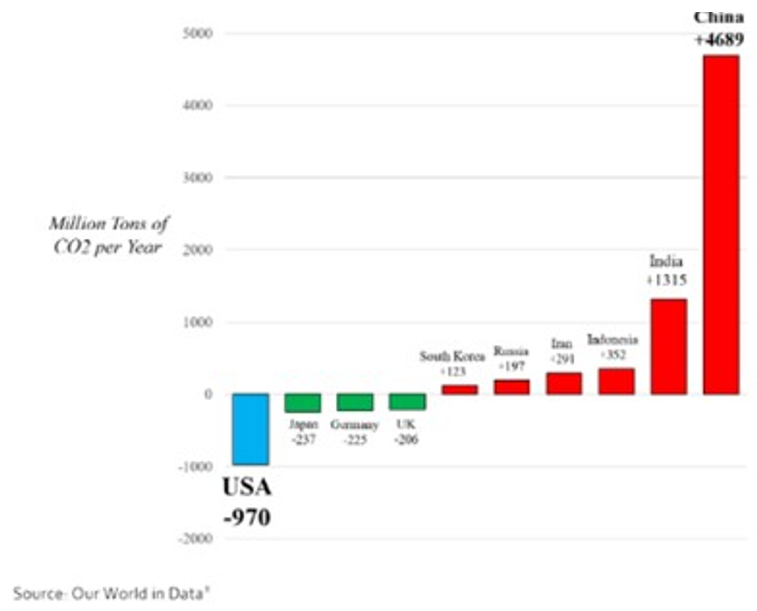 The impact of horizontal drilling and hydraulic fracking has been huge in changing the energy cost, reliability, and emissions in the U.S. Key points are:

It's unfortunate that this article does not address the methane emissions linked to fracking. Methane is a greenhouse gas that is "80 times more potent than carbon dioxide." While fracking may help the energy sector reduce CO2 emissions, it is not a sustainable option as climate change continues to worsen.

Alyssa, please see my LinkedIn article, "Are Methane Emissions From The U.S. Oil and Gas Industry A Crisis?" I agree methane emissions are a problem that the oil and gas industry is addressing, however, we have seen dramatic reduction in CO2 with gas replacing coal in the U.S.

As Alyssa points out, calling attention to the reduced emissions of CO2 as a result of switching from coal to fracking ignores the impact of the accompanying huge increase in methane emissions that also resulted. The analysis suggested in this article is a classic, grievous case of greenwashing. Noting that the industry is “addressing” the issue provides scant comfort.  The issue has been around for 40 years, at least.

This subterfuge starts, of course, with intense lobbying to resist methane emissions measurement and reporting requirements. Lobbying efforts were highly successful in the Trump years. They may be less so with Biden.

« Methane is the second-biggest cause of climate change after carbon dioxide. Its high heat-trapping potential and relatively short lifespan in the atmosphere means cutting its emissions can have an outsized impact on the trajectory of the world's climate.»

Estimated methane emissions have increased dramatically in recent years, especially in Texas and North Dakota.  Purposeful flaring and venting is a major source of methane emissions. Rather than an “outstanding achievement”, fracking is turning out to be an outstanding environmental calamity.

While there may yet be a reduction in overall GHG emissions as a result of substituting natural gas for coal, perhaps via conventional drilling and production,  it will happen not because of, but in spite of fracking activities in Texas and North Dakota.  Texas is by very far the state with the most fracking activity with  136,000 wells in 2020. Colorado and North Dakota are second and third with the most fracking with about 20,000 wells each in 2020.

The volume of U.S. natural gas that was reported as vented and flared reached its highest average annual level of 1.28 billion cubic feet per day (Bcf/d) in 2018, according to the U.S. Energy Information Administration’s (EIA). 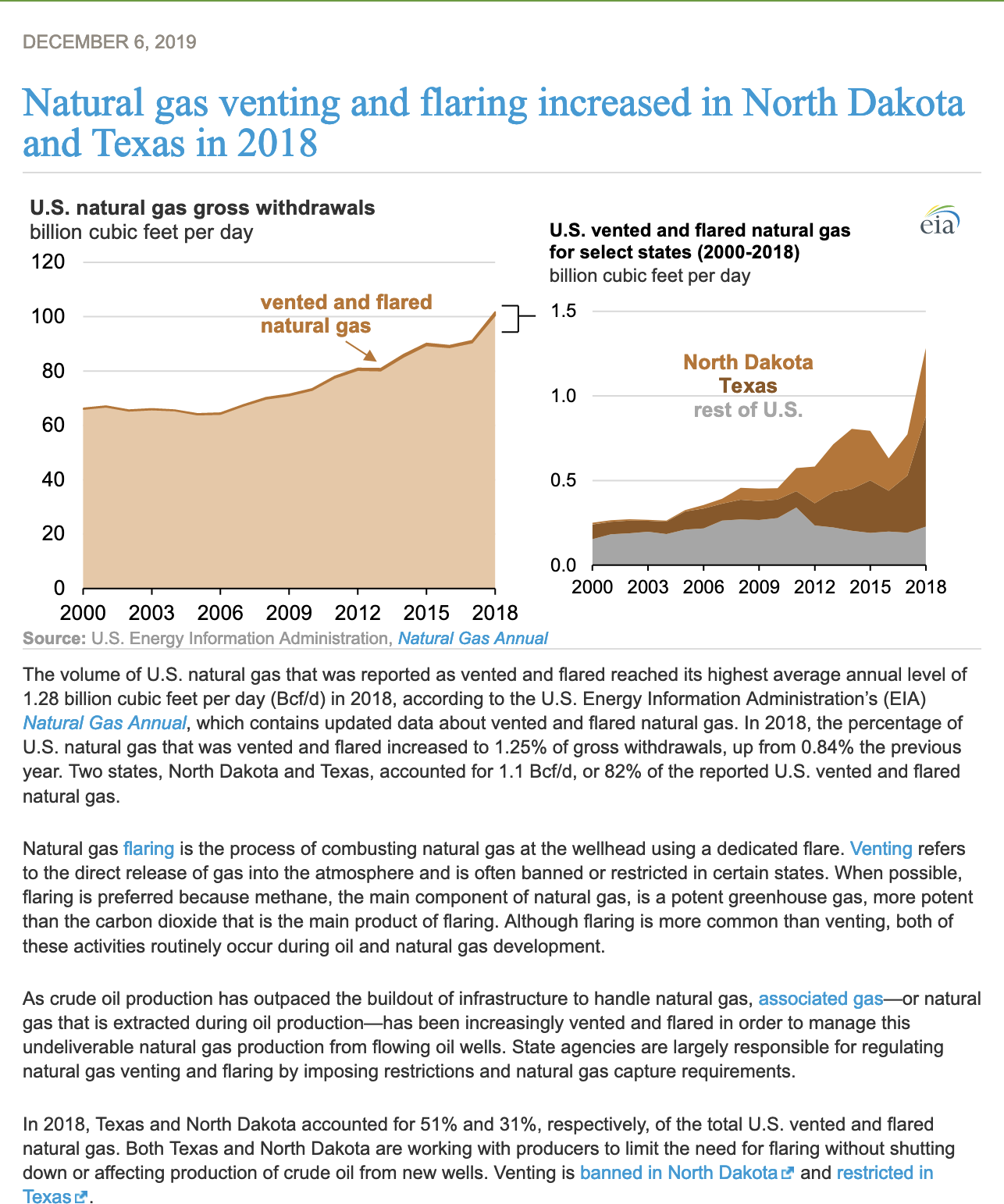 In the absence of standardized and enforceable emissions measurement and reporting methods, it is possible that actual figures are much higher or lower.

"Every oil- and gas-producing state has in placeregulations to limit or prevent the “waste” of gasresources. However, the flaring limits vary from stateto state and no national standards currently exists."

For all of its expertise and lobbying skills, one would think that API (American Petroleum Institute) might have established standards by now.

So, in just one year, methane emissions from venting and flaring negated more than a quarter of the claimed reduction of GHG emissions from CO2 since 2005 as a result of replacing coal with natural gas. At this rate of flaring and venting, the net emissions of GHG from just Texas and North Dakota gas will negate many times over the reductions quoted in this article.

So, if you are looking for a reason that fracking is “un-celebrated” or that “outstanding achievement in U.S. energy has occurred with barely a whisper from the news media”, look no further.

In addition, methane emissions associated with the oil and gas industry come from every phase of the E&P process, not just from flaring and venting, though these are the most avoidable and egregious. It is not surprising that API is eager to tout GHG reductions in the form of CO2, due to replacement of coal plants with gas, but is reluctant to quantify the massive extent to which methane emissions negate the effect of replacing coal with gas.  It may very well be that we would be better off with coal than with fracking for gas production from the point of view of total GHG emissions.

As mentioned above, flaring and venting are not nearly the end of the story.  There are releases during gas processing, from pipelines, during transfer from between pipelines and ships to storage, from ships carrying liquified natural gas and, one of the biggest, from the over four million abandoned wells in the US.

So, by all means, we would love to hear more about how the oil and gas industry is working to reduce total GHG emissions, first by simply measuring and reporting them accurately.

There is the possibility that the commitments to reduce methane emissions made at recent COP26 meetings in Glasgow will close this loophole that allows this sort of greenwashing.  It won´t happen quickly or easily. But, let´s hope so.

2  Calculations based on this.

There is a lot that is changing in the oil & gas industry for methane venting/flaring since your last data point of 2018, as shown in my graphs through 2020. I would call your attention to the graph in my article that shows increasing methane production with a decreasing ratio of methane emissions per 100 ktoe of natural gas produced.

Natural gas substitution for coal has been a big game changer for emissions reported by the EIA, not the API. Your assertion, “that API is eager to tout GHG reductions in the form of CO2, due to replacement of coal plants with gas…” is ill-founded as I have never quoted API, only the EIA numbers. Fact check your assertion, please.

If you have facts and a strong business case to disavow fracking in the U.S., please propose a ban on fracking to the U.S. DOE, and watch the uproar on consumer heating and electricity bills, jobs, emissions reductions, etc. Please sign your name and professional integrity to this if you feel this strongly. I await your DOE letter.

“Per the FT, the potential global warming effect of record production in the Permian Basin, the world’s biggest oilfield, has drawn fresh scrutiny as methane spews into the atmosphere from its oil and gas operations.Our Take 1: We hope that, like its commitment to continually improving safety, which began about 30 years ago, the industry will place reducing methane emissions at the center of its operations going forward. There is no better place to start than the Permian.Our Take 2: At the same time, let's keep things in perspective. Eliminating 100% of current methane emissions in the Permian would reduce US time-weighted GHG emissions by less than 1.2%. And it would reduce global GHG emissions by less than 0.3%. The Permian is not the source of all environmental evils—don't be fooled by efforts to paint it as such.

FT writes, mitigating methane emissions is seen by many as a priority for limiting impacts of climate change. As a result, emissions of methane in the Permian are back in the spotlight as oil and gad production in the basin rebounds to match the oil price surge from the depths of the 2020 crash.

The main sources of human-caused methane are agriculture and waste dumps, while fossil fuel extraction produced about a third of the emissions. But the oil and gas sector is the most shovel-ready sector for action—it's all human infrastructure and most of the technologies required to mitigate emissions are well understood.

According to a recent scientific paper, around 2.7m tonnes of methane is released into the atmosphere in the Permian each year from leaks in pipes, wells and processing stations across the basin, as well as from the intentional flaring of excess natural gas.

US special envoy for climate, John Kerry, this week hosted a gathering of ministers from more than 20 countries that also discussed national blueprints for how to cut methane emissions. More than 100 countries agreed at the COP26 - UN Climate Change Conference in Glasgow to reduce emissions from methane by 30% by the end of the decade compared to 2020 levels.

The methane crackdown has been broadly supported by most big public oil producers in the Permian, who have come under increasing pressure from shareholders over their environmental credentials. E&Ps like Devon Energy, ConocoPhillips, Oxy and EOG Resources are under pressure to live up to their pledges. Midstream firms, including Targa Resources, DCP Midstream and Energy Transfer are also in the spotlight. 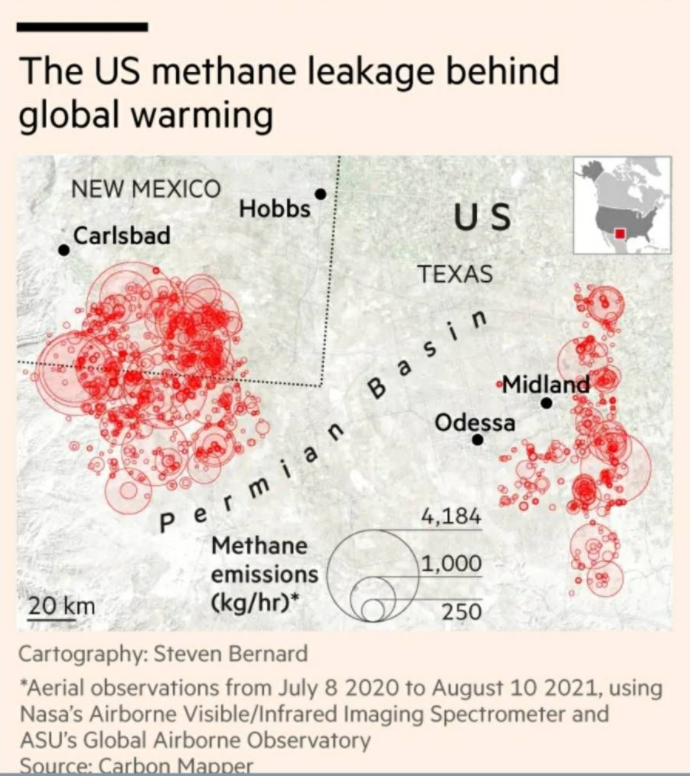