Why the Term “Baseload Power” Is in Need of a Shift

Department of Energy Secretary Rick Perry recently requested that his department study the effects of clean energy on baseload generation. The memo asserts that “baseload power is necessary to a well-functioning electric grid” and directs for the execution of “a study to explore critical issues central to protecting the long-term reliability of the electric grid...” The request is likely tied to the fact that several states are seeking to subsidize baseload generation, as they struggle to compete with cheaper renewable energy. Throughout the document, Perry seemingly constructs a paradigm that pits one technology (coal) against another (“clean energy” in the form of solar or wind generation).  The fundamental evaluation methodology is predicated on an understanding of “baseload generation” that is not defined in the memo, nor consistently agreed upon today. We at EnerNex believe that in order to have a useful discussion of the issues concerning the Energy Secretary, a consensus is necessary on what “baseload” really means in today’s electrical industry.

At the heart of this “baseload” discussion is really how to economically balance the variety of “must-run” resources. Traditionally, utilities have served the minimum daily demand with resources such as nuclear, hydro, coal, and natural gas. These “always-on” resources are most efficient when running 24/7, and curtailing their output would result in inefficiency and safety concerns. Similarly, renewable energy is logically a “must-run” resource because the fuel that powers the electricity is free. “Must-run” resources are called such because of the economics associated with their generation, and in some cases the safety concerns associated with slowing their generation. Within his memo, Secretary Perry seems to pit these two always-on resources against each other, asking about their respective impact on the flexible resources that are called upon to ensure grid power is there when people want it.

There are typically three “buckets” into which utilities group generation resources to serve their customers power. As defined in the Tennessee Valley Authority’s (TVA’s) 2015 Integrated Resource Plan (IRP), those groups of resources are baseload, intermediate, and peaking. In the graph below, TVA displays a traditional load curve (the black line) to show how power demands fluctuate throughout the day. An easy way to understand this load curve is to personalize it; most people use more power in the evening when arriving home from work and making dinner, doing laundry, turning on the heat or AC, etc. 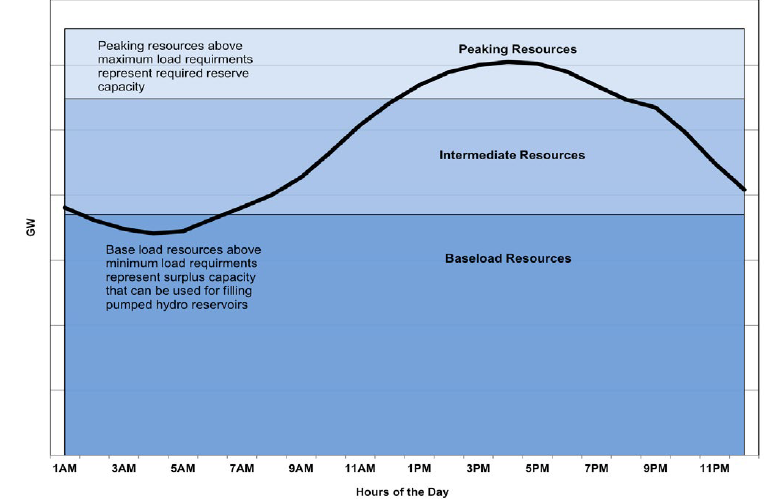 The graph above exemplifies how the demand for energy fluctuates throughout a typical day and how the three traditional generation resources are dispatched to meet that demand fluctuation.

TVA’s note on baseload requirements above minimum load is important to understand the grid functionality aspect of Perry’s request. TVA’s pumped hydro reservoir functions as grid-scale storage, utilizing cheap baseload power to store for later when customers want it. Very few utilities have this type of pumped storage to all the cheap power that is produced. “Must-Run” and baseload power have traditionally been synonymous because of the cheap power that is produced and the impacts of slowing or shutting down facilities. What is missing from the graphic is a key question for Secretary Perry’s study: What types of resources go into baseload or load shaping generation? Or, more specifically: How does renewable energy fit into the baseload/intermediate/peaking buckets?

Let’s look at two examples that answer the question. First, in their IRP, TVA forecasted the long-term energy needs of the Tennessee Valley region. They display the following graphic within that piece, which layers the various energy sources expected to serve the region. The layering repeats twice, once for existing facilities and once for expected new resources. Note the placement of nuclear, hydro, and coal at the base, followed by renewables and then (natural) gas and demand response resources layered on top. This is roughly how utilities have traditionally built their resource portfolio. 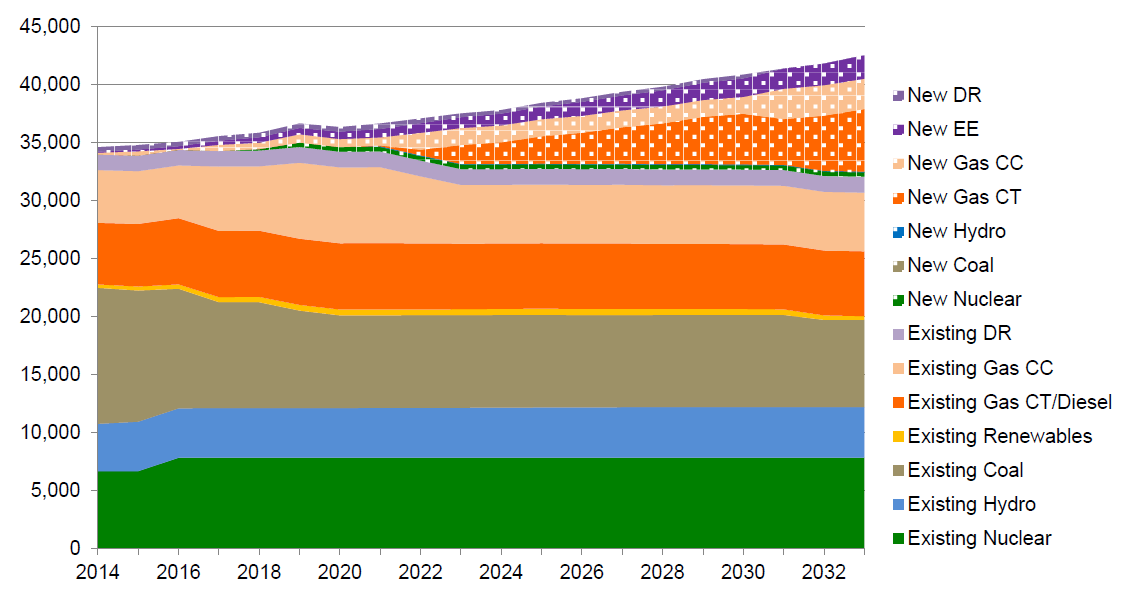 We can contrast that graph with how the California Independent System Operator presents the resource mix in their Daily Renewables Watch.  Note how renewables form the base and the other resources are layered on top.

These charts are likely too simplistic as we have little insight into how each organization considers meeting the daily fluctuations in energy demand and supply. In the case of California, the resource flexibility and efficiency of the “Thermal” and “Imports” categories is unclear; while in TVA’s document, we do not see any daily load curves. However, neither organization demarks one technology as baseload with others as peak.

Why we needed intermediate and peaker resources:

Even the most stalwart of informed renewable advocates will concede that the daily fluctuation of demand for energy does not align with when solar and wind produce electricity. Issues in South Australia have highlighted the fact. Some might argue that the next generation of inverter controls and storage will solve that problem, minimizing the need for grid scale reserve power (peakers) and spinning reserves (peakers that manage fluctuation on a minute-to-minute basis), but those same grid frequency services are merely rendered by new technologies even in that advanced solution. Essentially, everyone agrees that grid frequency control and generation shaping are necessary to balance the supply and demand of electricity on a daily basis.

However, the Secretary’s memo suggests that the newly active renewable generation across the US is displacing the intermediate and peaker plants, whose job is to match power supply with fluctuating demand. Since the bulk of renewable generation is at the hands of nature with solar producing when the sun is up and wind producing when the wind blows, these resources do not align with the functionality of traditional intermediate and peaker plants.

It is also helpful to remember the definition of baseload power in all of this. The Federal Energy Regulatory Commission (FERC) defines baseload power from their definition adopted in 2007 as “the minimum amount of electric power delivered or required over a given period at a constant rate.” There is no mention of grid reliability, generation type, or ability to adjust output. And anything that does not generate at a constant rate (renewables, included) does not count as baseload power.

Where do renewables fit in:

So where do renewables fit in? The simple truth is that they do not fit into any of the traditional baseload, intermediate, or peaker definitions. Often, renewables (particularly distributed renewables) do not provide the voltage and phase balancing that provide power regulation capabilities that have been built into traditional generation. Renewables provide capacity when they provide it, but the services provided by traditional generation to supplement these technologies are necessary for both those times when renewables don’t run and for the grid services that renewable generation alone do not provide.

Does that mean we should just avoid renewables? Many in the industry would consider this unwise because renewable generation options are beginning to rival their counterparts on a $/kWh basis, even without considering subsidies or the effect of pollution on public health. Rather, it seems likely that a shift in the way we think about resource mixes is necessary.

Last year, Pacific Gas and Electric (PG&E) made the decision to shut down their nuclear power plant, Diablo Canyon, in no small part due to the state’s increasing focus on renewable energy generation. Executives from PG&E stated that the full output from Diablo Canyon would no longer be needed in the anticipated high-renewable future in California. Nuclear energy is the quintessential baseload power; it operates best at a set output for 12-24 months without fluctuating.  California tends to be a special case, but it is telling that these executives, in reconsidered their generation requirements in a high-renewable future, agreed that replacing their nuclear energy was the most cost effective path. PG&E is ostensibly not reducing their reliability, but replacing non-ramping nuclear generation with a combination of solar, wind, and natural gas.

There are industry working groups working on these issues. One is looking at all of the costs associated with adjusting traditional baseload and intermediate generation facilities to “make room” for variable renewables. This includes more frequent maintenance, changes in fuel contracts, and other issues that tend to now show up in discussions of levelized cost of energy analysis. At the same time a second working group is looking at the costs of “firming” variable renewables.

The Eastern Renewable Integration Study, which EnerNex assisted to develop, found that “integrating up to 30% variable wind and [solar] PV generation into the [Eastern Interconnect] is technically feasible.” The strategy to build a generation resource mix is changing for myriad reasons, but technology selections and policy decisions should be made with a full understanding of the capabilities of the grid, rather than by wielding outdating definitions in support of traditional methodologies. If the traditional method is still the most economically logical option to provide reliable power, then it should win out, but not because it fits neatly into how we have always looked at “baseload.”