Blockchain has earned a widespread reputation as a disruptor and a disintermediator. Most often it’s positioned as a threat to incumbents in industries with important centralized players or middle men, such as banking, finance, notary, and the like. But is blockchain’s disruptive reputation warranted in the energy sector? Spoiler alert: we’d argue not. In fact, we urge quite the opposite.

There is no shortage of evidence that customers are investing in distributed energy resources (DERs) in record numbers: rooftop solar PV, behind-the-meter battery energy storage, smart thermostats, and perhaps above all, electric vehicles. The focus of capital investment and asset deployment is rapidly shifting to the edge of the grid. 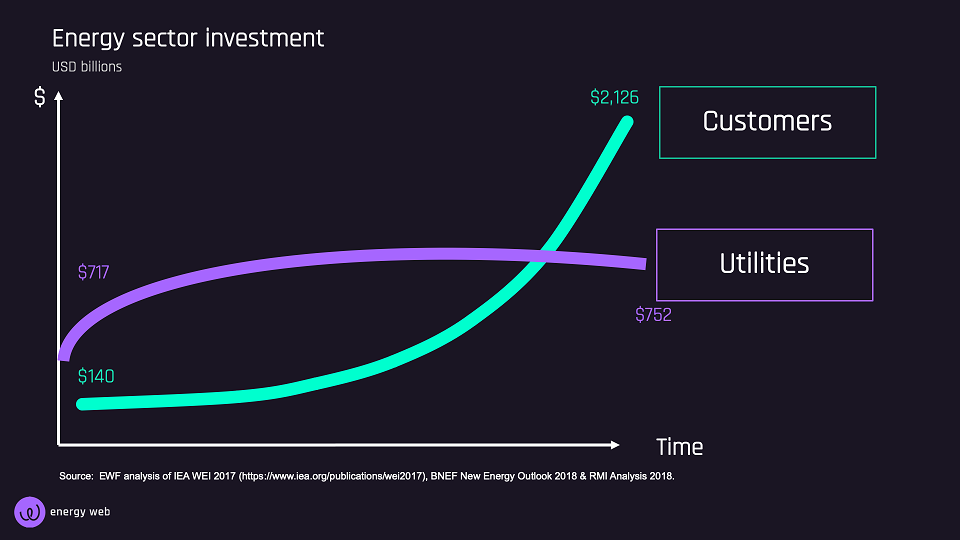 These trends shouldn’t be a surprise. But their speed and magnitude probably are. According to our team’s analysis, by 2030 customer investment in electricity sector assets (including renewables, transmission & distribution infrastructure, DERs, and electric mobility) will eclipse utility investment. This represents a tectonic shift from the way we’ve built and operated the power grid for the past century, and a very different grid is arriving on our doorstep sooner than many think.

In places such as Hawaii and Australia where such trends are most advanced, distributed generation now represents the single largest “power plant” on the grid. In response, most attention has been paid to new utility business models, performance-based regulation, DER-friendly rate structures, and other market elements. Yet too little attention has been given to the required enabling digital infrastructure that will make it possible for grid operators to efficiently run a heavily decentralized, decarbonized electricity system.

Blockchain is especially well-suited to this new world order

With this context, blockchain is a solution to help manage the new grid that includes a lot of distributed energy resources, rather than blockchain being the key driver of the decentralization as it is often positioned in other sector.

Importantly, unlike some others in the often-hyped energy blockchain space, we don’t believe blockchain is a silver bullet that will replace the entirety of utilities’ digital software infrastructure near term. But blockchain does have compelling attributes that make it especially well-suited for fulfilling certain roles in the emerging energy sector technology stack.

As Greentech Media recently put it: “With or without blockchain, the grid is changing. But blockchain’s distinguishing features — immutable ledgers, decentralized architectures, and programmability through smart contracts — are compelling for an electricity system with much greater customer-side participation than ever before.”

To date, the most popular use of blockchain in energy has been to enhance the way we trace energy or energy attributes. Experiments are everywhere in this space, ranging from virtual local markets for exported solar (e.g., L03, Powerledger), digitizing energy purchasing (e.g., WePower, TEO), or building new renewables markets from scratch (e.g., PTT in Thailand and Energy Web Origin).

But there’s a new use case emerging that goes well beyond traceability, a use case focused on transforming DERs into fundamental digital building blocks of the emerging grid architecture. DERs are being deployed rapidly in markets across the globe for a variety of reasons, but they are almost universally not integrated into grid operations, even though they can create significant value for virtually all stakeholders when utilized properly. Blockchains can overcome this gap, assigning and managing digital identities for DERs, making DER onboarding seamless and efficient, and enabling almost-instant settlement for grid services at very low transaction costs. With this architecture in hand we can and will help grid operators access a global fleet of billions or even trillions of assets that were previously considered too small and too expensive to deal with.

These examples merely scratch the surface. Many more use cases are relevant now and/or in the near future. And as with the advent of smartphones—originally conceived for calling and texting, and now a platform for an entire mobile app economy—we probably haven’t even envisioned the most innovative uses for blockchain technology in the energy sector.

Where should utilities go from here?

So what do utilities do about blockchain technology?

Next, we encourage utilities to roll up their sleeves and start experimenting. We are already seeing the first full commercial-scale deployments of blockchain solutions, such as the renewable energy market we recently announced jointly with Thai multinational energy company PTT and which is running on the enterprise-grade Energy Web Chain that launched earlier this year. But utilities need not make that leap from square one. Many more examples exist of insightful demonstrations, pilots, and minimum viable products utilities have implemented around the world; many of them are running on the Energy Web’s Volta test network, a pre-production environment for experimentation with decentralized applications. And many will migrate to our mainnet, the Energy Web Chain.

More than 100 companies from around the world have joined the Energy Web community, ranging from vertically integrated utilities to grid operators such as TSOs, DSOs, and ISOs to multinational energy companies. In just the past couple of years, there has been an important shift in the energy sector’s perception of blockchain technology. They are increasingly realizing the benefits it can offer; they are seeing more and more that blockchain is friend, not foe.

And we expect that one year from now, many more commercial deployments of applications will  have reached prime time. Will your organization be on that path? Or left pondering what to do about the natural decentralization of the energy sector that’s sweeping through electricity systems around the globe?

Love this view of things-- the industry is evolving. Change is coming. And that's OK-- learn about it, embrace it, and find out how it can best work for your organization!

Love that-- going to steal it!

Walter, thanks for the article!  For your new use case for integrating DER into the grid, do you see this as a application for ISOs and DSOs or utilities?  Interested to see who you would think manages this blackchain application.

Great question, let me caveat my answer with the comment that only time will tell. But I can see many different models appearing. In developing countries this could be managed by the micro-grid community itself. If there is a connection to the main grid then I guess it will depend on the need for that connection to always be there. In the more mature markets there will be a new role appearing at a local, regional and national level for either one of them. I think the ISO / DSO / Utility that really builds the strongest relationship with this new type of customer will be allowed to play an important role to potentially manage the assets on their behalf. Very interested in the views yourself and other readers.

Walter, your answer is quite understandable.  It depends.  It depends on the regulatory environment, which is different in every country and many states in the US.  It depends on the level of DER now and goals for that territory.  While the use case you propose for a more integarted DER is more likely to lay with the utility in my opinion, it would only be more forward thinking utilities that readily see the busines case in the integration of high levels of DER.  In cases where high levels of DER are an issue in balancing the grid now, the application may become the responsibility of a DSO/ISO out of need.