Dr. Peter Lilienthal has been the CEO of HOMER Energy since 2009.  HOMER Energy has the exclusive license to the HOMER® software that he developed at NREL where he was the Senior Economist from...

One of the things we strive to do with each release of our HOMER software products is to help our users make better decisions about how to design and develop distributed energy projects. We try to simplify the complexity by providing a strong decision support framework. What energy resources make the most sense for a given geography and use case? How should generation assets be sized? And, how will the environmental impacts and economic outcomes of various configurations compare? Ultimately our software modeling reveals what kinds of distributed energy project designs result in the best investments, and what the return on that investment will be. 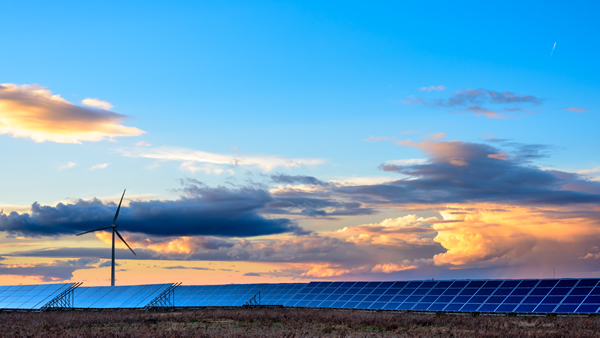 Although the HOMER software was originally developed as a research tool at the National Renewable Energy Laboratory, I always believed that there was a huge potential for clean distributed power. According to Greentech Media Research, distributed resources are now poised to double in the U.S. by 2023. As the distributed energy marketplace grows by leaps and bounds, it’s also changing rapidly. This is primarily driven by the plummeting cost of solar, and now storage is following the same trajectory. Another factor is the evolution of information and communication technologies that allows more sophisticated and affordable controls. Together, all of these trends are increasing the demand for distributed energy projects and creating an upsurge of interest in microgrids, which are a subset of the distributed energy marketplace.

Because of their ability to manage a variety of energy resources as a single system, microgrids have proven they are able to accommodate large penetrations of renewable energy. They are also able to buffer the impact of variable renewable energy generation on larger power systems to which they might be attached. They offer important benefits in terms of energy resiliency because of their ability to operate either connected or independently from the main electric grid. Since the vast majority of grid outages are the result of disturbances in the distribution system, the only way to protect against those outages is to have the energy resources on the customer’s side of the distribution system. This becomes increasingly important with increasing concerns about terrorism, cyber attacks, and extreme weather events made more likely by climate change.

Up until very recently, the most obvious use for microgrids was to provide energy access in off-grid settings, remote areas that were not near a reliable grid power or any grid at all. This includes villages, islands, mines, telecom sites and the military’s forward operating bases. Most of these locations were in developing countries and depended solely on diesel engines, which often ran for only a few hours per day.

The high cost of diesel fuel and new efforts to “green” the energy supply have spurred HOMER Energy customers to model the addition of renewable energy to these remote, diesel grids. We’ve learned a lot from working with people to design distributed power systems in these remote locations. That experience and expertise lays the groundwork for strategies to incorporate large penetrations of renewable energy within microgrids that are now being built in developed countries for entirely new reasons.

While remote microgrids remain a huge market – there are still 1.2 billion people without any reliable power whatsoever and an even larger number of people who suffer with very unreliable utility service – the interest in microgrids in North America and Europe is growing for different financial, technical and environmental considerations.

These new microgrid markets include commercial and industrial customers (C & I) who want to reduce their utility demand charges, take advantage of time-of-use rates,and improve their resiliency. According to Navigant Research, the C & I sector is the fastest growing microgrid market segment in North America and globally. Some C & I customers don’t even need their distributed energy systems to be capable of operating independently from the main grid; they may simply want behind-the-meter distributed energy resources to save them money and provide green energy. Our HOMER Grid software can design grid-tied solar+storage systems, with or without the ability to operate independently from the main grid. 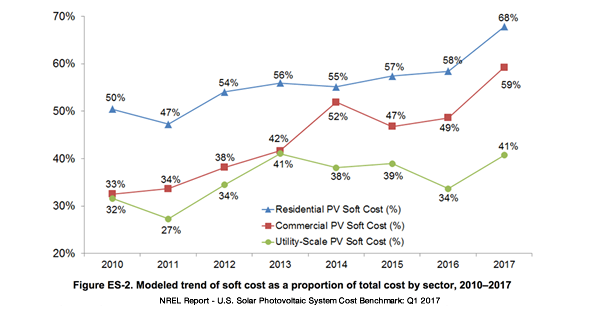 As the costs of solar and storage equipment fall, the soft costs become increasingly important, and studies show that they are increasing in proportion to total project costs. Soft costs include everything prior to procurement, such as permitting, financing, and customer acquisition. One of the most important soft costs is system design. In the case of a hybrid renewable energy system with multiple components, calculating the trade-offs of different technology choices and determining the optimal system configuration can be a complex task. Incorporating utility tariffs and different incentives from one state to the next make it even more complicated.

In the case of smaller distributed energy projects, the soft costs make up a larger percentage of the total. These expenses also tend to come straight out of the developer’s pocket, at a time before developers have been able to mobilize financing.

Our mission is to help developers cut back on bespoke or custom engineering and lower their soft costs. A streamlined development process is critical to making smaller projects financially viable.

At HOMER Energy we like to think of the distributed energy design as a three phase process:

In the first phase of distributed energy design, the user starts with only a vague idea of what makes sense.The goal is to get enough confidence in the project potential to justify devoting resources to its development. For example,the site-specific data might be limited (interval load data can be expensive to obtain if you have to install measurement equipment), so we provide a variety of generic load profiles. At this stage it is important to consider the feasibility of a wide range of system designs.

Good questions to ask at this phase of the project might include:

a. Do we need backup power (ie. To model 100% renewable energy)
b. If we do want backup power what is the trade-off between more batteries and less fuel use??
c. What is the rough budget in terms of capital and operating costs and how does that vary with the design?

At the end of this stage you should have enough understanding of the potential project to have useful discussions with potential suppliers. 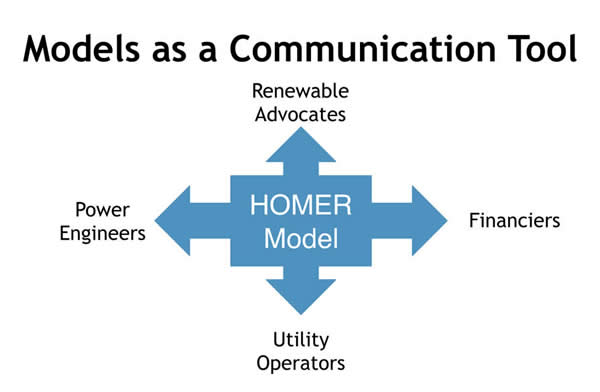 The HOMER software can become a powerful tool to sell a project to its owner. It also becomes a valuable communication tool between stakeholders with different perspectives, and can help create a common understanding between power engineers, financial partners, utility representatives and solar advocates or professionals, and the project owner.

At this second stage in the design process, the user should have good site-specific data and have narrowed their options down to specific equipment choices.

Some HOMER uses refine their designs during this phase to compare different products and identify differences in efficiency and performance. The HOMER software includes a large, up-to-date database of vendor products so it’s easy to refine the design by comparing vendor information.

At the end of this stage you should have a proforma with enough specificity to engage with potential financing sources..

Often the responsibility of the EPC contractor, Phase Three does not normally rely on HOMER modeling software. At this stage of the project, the contractor will produce detailed engineering drawings and resolve site specific issues such as conduit sizes, wiring, protection schemes, and construction challenges.

HOMER software helps its users make sense out of a plethora of choices by making rapid mathematical calculations that would be impossible for any human to perform. How can you analyze multiple combinations of solar, wind, batteries and generators in a single system? What component sizes will deliver the greatest financial benefits? Both HOMER Pro and HOMER Grid simplify the whole process and tell you what the most economic solution is. Ultimately HOMER software can help identify potentially successful projects. It also reports carbon emissions, fuel use and other important environmental factors, in case your modeling objective is carbon reduction and not cost.

Our flagship product HOMER Pro is the “Swiss Army knife” of microgrid modeling tools. It is for any off-grid project or project connected to a utility grid with frequent outages.

HOMER Pro has numerous special modules and you can purchase only the capabilities that you need. The Advanced Modules include hydro power, combined heat and power, advanced grid modeling, advanced storage and more. HOMER Pro can model permanently off-grid projects, or grid-tied systems that are capable of disconnecting from the grid when necessary. HOMER Pro excels at modeling power reliability issues, situations where there are lots of brief power outages, such as what you would find on a weak or unreliable grid.

Just recently we released HOMER Grid, because we saw that inexpensive storage is opening up whole new markets in the grid-connected world. Unlike HOMER Pro, HOMER Grid is focused like a laser on making it easy for C & I customers to model behind-the-meter hybrid renewable and combined heat and power systems that save money on electric bills. HOMER Grid calculates how to reduce utility demand charges, optimize the timing of the utility consumption under time-of-use rates or maximize self-consumption of on-site power.

Recently we added the capability in HOMER Grid to model prolonged outages. This is a feature that directly addresses the resiliency of corporations in the face of extreme weather events and other grid-related emergencies.

More and more companies are becoming concerned about reliability and resiliency. Distributed energy is the answer to these challenges because most outages are caused by disturbances in the transmission / distribution service. The solution lies in power that is produced close to the load.

To conclude, we aim to contribute to a more efficient project development process for distributed energy. We want to help people get through their design process as smoothly as possible and provide simple but powerful financial tools that are easy to understand and that improve communication among the stakeholders.

This is a great piece and a terrific explainer of how to take microgrid from academic exercise to reality. Thanks so much for sharing