Palo Alto, Calif.-based residential energy storage-smart home energy system and platform provider ElectrIQ sees big things ahead in the rapidly shifting market sectors and it’s taking steps to capitalize on them. As reported in part one of this two-part series, the Silicon Valley-based company began making inaugural shipments of its IQ System in 3Q, seeking to at the least fill the 4,000 pre-orders it received upon introducing a commercial version of the IQ System a little more than a year and a half ago.

In addition to solar energy installation businesses in key leading-edge markets, such as Hawaii and California, ElectrIQ has been seeing strong interest in its cloud-based residential battery energy storage-smart home energy management technology from utilities and community choice aggregators (CCA). Furthermore, it’s working closely with a variety of smart home and energy appliance and device manufacturers and vendors in a bid to assure the interoperability of their respective products and services.

We continue our discussion regarding all that has been happening recently at ElectrIQ and in the residential energy storage-smart home energy market sector with business development director Aric Saunders and marketing director Brandon Sanchez here in the final installment of this two-part blog post.

Readying for a Surge

ElectrIQ sees demand for residential energy storage solutions picking up faster than many anticipate. The company has shifted its business strategy and altered its business model accordingly over the past year and a half, Saunders and Sanchez explained.

"If you look at GTM Research's projections, it's still early days for the home battery energy storage systems market. I believe they forecast something on the order of 15,0000 unit shipments for 2018. Now, 5,000 units wouldn't make a big dent in a utility's customer base, but it would be a huge boost for a residential energy storage systems provider like us," Saunders said during an interview.

“We think the ability of individual homeowners to realize the value of aggregating revenues from battery energy storage is a lot closer than many think, and  we believe we will be in place to facilitate this as costs, along with all the other variables involved, will align over the course of the next couple or few years,” Sanchez told Energy Central.

ElectrIQ is taking a holistic, open systems approach in producing and continuing to refine and upgrade the IQ System and its smart home energy storage, monitoring and management cloud services platform. That entails collaborating with organizations spanning the entire, rapidly developing market value chain to make them aware of it and demonstrate its capabilites.

The Silicon Valley-based smart home energy storage and management startup has also been working to differentiate IQ System from the growing ranks of competitive offerings on the market, Tesla’s Powerwall in particular. 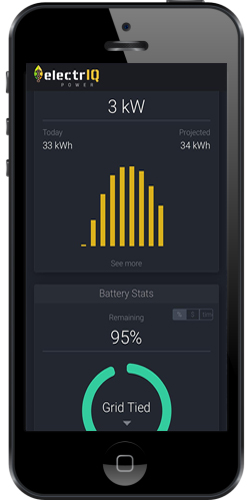 Leveraging its investments in the mammoth lithium-ion battery energy storage and solar photovoltaic (PV) module “gigafactories” in Sparks, Nev. and Buffalo, NY, respectively, Tesla appears committed to establishing itself as the lowest cost provider of intelligent solar PV, residential energy storage and electric vehicle (EV) products and services in the US and key strategic markets worldwide, such as Australia, Germany and the European Union, Saunders pointed out.

Tesla has done an enormous amount of good for the fledgling battery energy storage and smart home energy industry sector in drawing attention to all the benefits advanced lithium-ion battery storage solutions offer, and in terms of driving down costs, Saunders said.

That notwithstanding, Saunders and Sanchez highlighted some key attributes and characteristics they contend distinguish ElectrIQ’s IQ System and raise it above competing offerings, not only as compared to Powerwall, but other residential energy storage-smart home energy solutions vying to gain an early lead in the market sector.

“One of the main comments we hear at the expos we attend or from general inquiries is, 'How are you different from the Powerwall?'," Sanchez elaborated.

“Tesla's system is just a battery, where our system integrates the inverter and battery seamlessly. What many people don't realize is how much extra hardware is needed to install systems like the Powerwall. We've taken all those pieces and put it into one system making the system much easier to install and look a lot cleaner."

At a suggested list price of around $15,000, the cost of an IQ System is well above that for the Tesla Powerwall, which Tesla has suggested should retail anywhere from around $3,500-$6,500.

That suggested price doesn't go beyond the surface of the issues associated with purchasing, installing and getting full vlaue out of the latest intelligent battery-based home energy storage, and smart home monitoring and management systems, however. Adding in the purchase and installation of a DC-AC inverter and LiB and smart home energy monitoring, control and management apps raises the cost of a Powerwall to a level about the same as for an IQ System, according to Sanchez and Saunders.

In addition, ElectrIQ’s efforts to design and build a “plug and play” solution that automatically and seamlessly recognizes and integrates with associated smart home energy devices and control and management equipment adds a lot of value to the IQ System in that it removes end user headaches and enables them to realize the benefits of the system, including saving on utility bills, right out of the box.

“There’s a lot more flexibility regarding what our system does and the associated benefits. There are a lot of missing details –  regarding solar energy systems integration, for example – when it comes to the Powerwall and other solutions available today. We believe those looking into purchasing a home battery energy storage or smart home energy management system would have a lot of unanswered questions based on the marketing of those products and services,” Saunders elaborated. 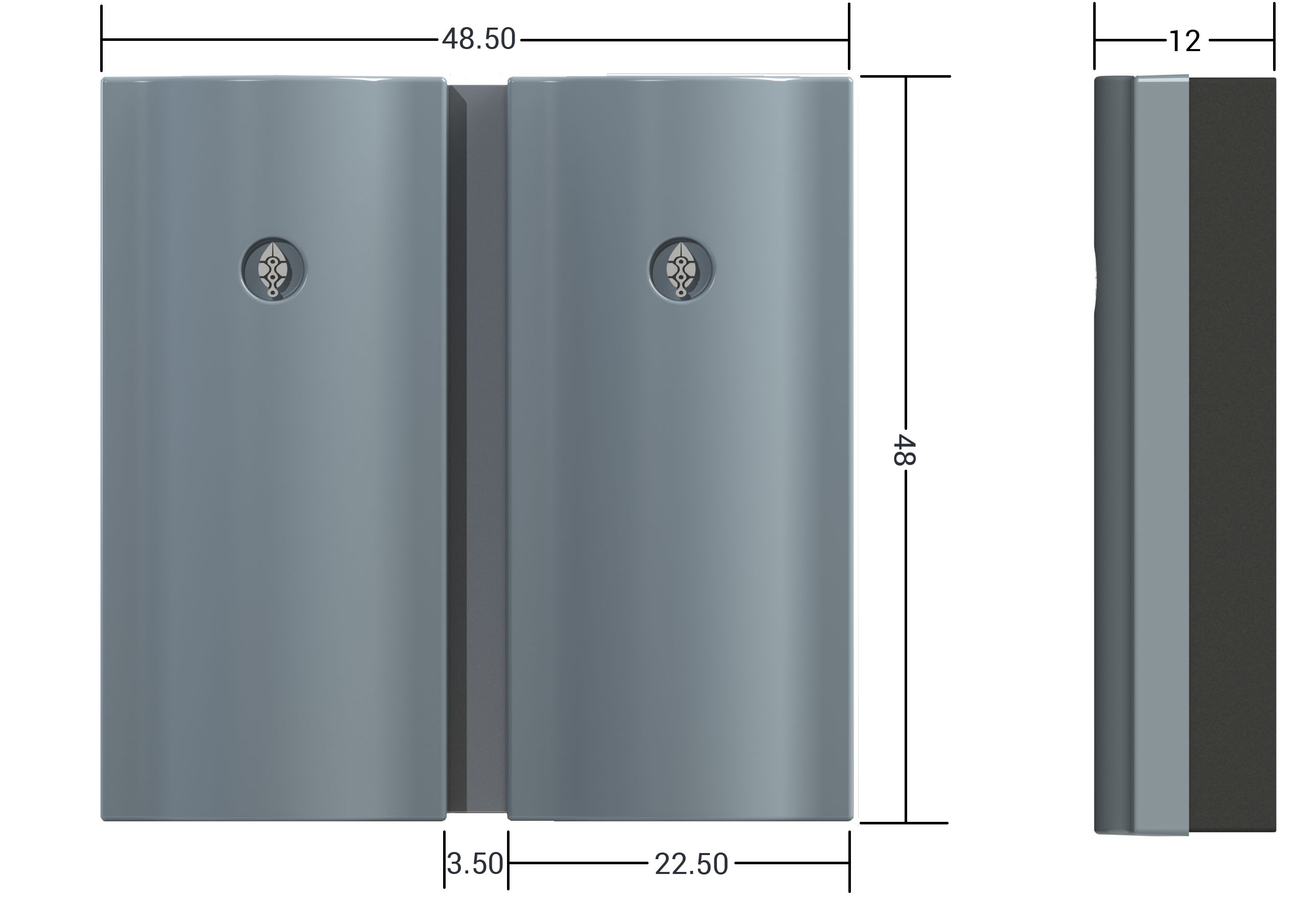 Integrated directly into the IQ System’s battery storage inverter, ElectrIQ’s solution can throttle power and energy output as operating and environmental conditions change more efficiently, and hence, cost effectively than Powerwall, for example, Saunders pointed out. “So, in the middle of the day when there’s lots of load, the system can be set to automatically turn off the AC (air-conditioning) before you leave the office for the day.

“Our inverter throttles down solar production instead of grounding it. IQ has control over the entire solar PV-energy storage system so that solar PV electricity will never leak and shoot out on to the grid, which is appealing to utilities,” he added.

Looking ahead, ElectrIQ sees demand for residential energy storage systems approaching mainstream market levels in 2019, and management is taking steps to assure that it will be in position to take advantage of that. “We’re talking to anyone that does smart appliances and smart home energy monitoring and management,” Saunders said.

That includes discussions with Schneider Electric regarding integration of the IQ System with Schneider’s new smart electrical control panel. “With that, we not only will be able to monitor loads more closely and accurately, but in the near future control loads through circuit breakers,” Saunders explained.

That’s a smart home tech development path others are keen to move quickly along as well. ElectrIQ is also working along the same or similar lines with LG, Samsung, Nest and other smart home appliance market leaders.

For example, Saunders said that ElectrIQ is integrating with Nest on smart plugs that monitor household electricity loads. “The ability to control loads from circuit breakers is still in the developmental stage with all these groups, but everyone is working on developing smart electrical control panels,” Saunders explained.

“That would broaden out homeowners and electric services providers’ ability to monitor and control loads, moving them down the line from large sources, such as HVAC systems and pool pumps, to lighting and all the other electrical devices and equipment found in homes.

“We could remotely shut off or adjust those loads in homes during demand-response events, or when a homeowner is not home, for instance. There’s a lot you can do to optimize the impact of this technology on home energy usage,” Saunders added.

In addition to having just earned UL9540 certification for the IQ System, ElectrIQ has been able to take out a reinsurance policy to cover product warranty and any product liability claims in the event any such claims based on use of the product line emerge. That boosts the “bankability” of IQ System sales and systems installations substantially, Saunders pointed out, providing additional assurance and confidence to supply chain and financial partners, as well as customers.

Aiming to improve IQ System in terms of affordability, ElectrIQ is exploring consumer finance options along the lines residential solar PV installation companies, such as SolarCity and Sunrun, and more recently, commercial-industrial battery energy storage systems providers, such as Green Charge Networks, have proved successful in adopting. That would enable ElectrIQ to install, maintain and share in the operation of and savings generated as a result of using its residential battery energy storage-smart home energy management systems and platform.

“We have been talking with a couple of different consumer finance groups regarding ways of spreading out and amortizing IQ System purchase costs, but we don’t have anything to announce at this moment,” Sanchez said. “We’re actively engaged in conversation to figure out what the right model is, and utilities are part of that discussion.”