NV Energy’s service area covers 45,592 square miles of Nevada. The utility provides electricity to 2.4 million citizens throughout Nevada as well as a state tourist population exceeding 40 million annually. To serve all those people takes a lot of effort, planning and a system upgrade once in awhile.

We spoke with Mark Ellingboe, NV Energy’s supervisor of line construction, about recent transmission work in the Henderson area.

Ellingboe commented that this particular section of 69 kV line  being replaced in Henderson was likely “put in during the Depression.” And it came with a bevy of issues: The fact that it’s “antiquated” being only the first. His team had no splices available for this old wire, and it had no shield wire. After a variety of engineering studies, the plan was to put in a quad circuit, but that would require pushing the wire up to a taller height to compensate for possible sag. Since taller structures weren’t possible (due to NIMBY issues, crossing distribution wires and a road in the mix), they chose an ACCC conductor that would allow them to stay at the original line height.

“This section has original lines from the Hoover Dam construction era,” Ellingboe said. “To do repairs to it would have been difficult, since we don’t have replacement parts for this darn old conductor.”

On the plus side, Ellingboe noted that salvaged parts from the original copper wire probably paid for part of the rebuild project—a nice recycling bit for the environment and for a good customer return.

In what sounds like the set-up to a comedy routine, Ellingboe pointed to crossing the expressway as the biggest hurdle in the Henderson rebuild process. (And why did the line cross the road? To bring power to the other side, of course.) They cleared that hurdle, and all the others within this project, with the help of a good team, a good plan, and the flexibility of a learning curve with the conductor from CTC Global (which is put into place in a similar fashion to traditional conductors, despite being relatively new technology to bump up capacity).

“I’m a lineman, and lineman by and large are reluctant to change,” Ellingboe said. “We’ve always done things certain ways.”

Having similarities to traditional projects helped overcome that reluctance, along with a great crew foreman, Shannon Skinner, who has worked with NV Energy for 18 years, and having a manufacturer’s rep onsite to walk them through the process.

They did have a hiccup with spooling the wire. The road issue and regulations forced them to split the process along two poles rather than having a single spool (as was in the original plan). That’s where the flexibility comes into play.

The biggest benefits that Ellingboe sees from this project are threefold. First, NV Energy doesn’t have to worry about clearance issues or renewed neighborhood concerns. Second, the new circuit will be more reliable, as they were able to add a shield wire for lightning protection. Finally, the fewer maintenance issues with this newer product also should help reliability, which should make for happy customers with fewer outages.

And, making Ellingboe and his crew happy: Under emergency conditions, they can now add extra load to this wire without fear of overloading the circuit.

If other utilities are facing similar rebuild projects, Ellingboe can’t stress enough the importance of having the manufacturer’s representative on hand for questions. Additionally, he counsels that others need to realize that processes may veer from the original project timeline and plan.

“The design of the project was complicated,” he said. “One structure was a running angle that we had to split up and pull wire from two different directions and then splice together. We didn’t recognize some of this until after the project was designed.”

But, in the end, Ellingboe and his team are proud of the project from beginning to end, working through on-the-spot solutions to problematic angles.

“I started in the trade 30-plus years ago, and there are a lot of things that are new and exciting. You either keep up or are left behind at this point. There are a lot of new adventures we’ll still have, and this is one of them,” he concluded.

Get insights from the largest utility in Latin America and the FBI in this issue, along with a former FERC chairman, EEI and others. Download a complimentary PDF of May/June Intelligent Utility magazine. Just click here.

Tell us how you view your IU. How do you read Intelligent Utility’s fun, funky and informative content? Do you take your print magazine on the plane? Are you a back-to-front backwards reader? Do you prefer the e-newsletter daily bits with your morning coffee or over an evening martini? Let us know directly on Twitter by aiming your tweet @IntelUtil with the hashtag #viewIU. 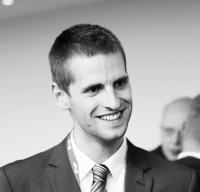