From Missile Defense to Grid Modernization: A Conversation with mPrest's Ron Halpern With the integration of Houston-based Innowatts' flagship distributed energy resources (DER) and demand response (DR) information management system, Israel's mPrest believes it has an end-to-end grid modernization solution unrivaled when it comes to processing speed, predictive analytics and the ability to aggregate and disaggregate data grid-wide, whether in front of or behind the utility meter.

MPrest's roots lie in the design, engineering and construction of sophisticated, enterprise-scale command-and-control centers and systems platforms, most notably for Israel's Iron Dome missile defense system. The developer of artificial intelligence (AI)-driven DER and DR management applications and systems, Innowatts tackles the challenge of providing utilities all the data, analytics and decision support they require to enhance grid efficiency, reliability and resiliency from the retail side of the meter.

Following conversations with Innowatts SVP Bob Champagne, Energy Central spoke with mPrest's Chief Commercial Officer Ron Halpern regarding the two companies' strategic systems integration partnership. We zoomed in on utilities' increasingly pressing need to leverage and realize the full value of their investments in smart grid infrastructure, as well as take advantage of new opportunities to create and grow new business lines revolving around provision and management of “behind the meter” DERs and DR programs.

Greater visibility behind the utility meter

Offering utilities the ability to gain visibility and manage energy assets across the entire spectrum of electrical and electronic equipment and devices connected to power grids is increasing in value – whether it's electric vehicles (EVs), rooftop solar, battery energy storage or “smart,” connected appliances and devices – and more quickly than many may have imagined. In contrast to the majority of vendors marketing their wares, mPrest's command-and-control systems platform has been designed from inception specifically for use by utilities, and other enterprise-scale, organizations, Halpern highlighted during our interview. “Many utilities are going through grid modernization, and they have a need for a 'system of systems' to manage everything,” he said.

Giving utilities and other customers the ability, and working with them, to customize and add to its Grid Modernization System of Systems is one of the attributes that differentiates mPrest's Grid Modernization System of Systems from competing offerings, Halpern continued. “Secondly, largely but not wholly due to existing regulations, utilities have limited visibility beyond meter.

“As a 'system of systems' provider, if we can give them greater visibility and insights beyond the meter, along with actionable information, they're able to do much more [with the data and information they're gathering from smart meters, automated metering infrastructure (AMI) and customer-side distributed energy resources and demand-response programs].”

That's what led mPrest and Innowatts to join forces. Rather than acting as a reseller of Innowatts' DERMS and DR software products and services, mPrest chose to integrate them within its Grid Modernization Systems of Systems, another aspect of mPrest's strategic approach to command-and-control center systems development that differentiates it from most competitors, Halpern said.

“By teaming up with Innowatts we're giving utilities visibility beyond the meter. That enables them do many things with that data and information, not only to determine exactly how much load exists at any given point in time anywhere on the network, but the ability to 'disaggregate' that load and see how much is due to on-site [customer] generation and/or battery energy storage, for example.

"That, in turn, gives them a greater, much more accurate, level of predictability regarding what's going to happen and the ability to adapt in advance of their occurrence. As a result, utilities' susceptibility to unmanageable DERs, such as solar PV systems, diminishes significantly.” 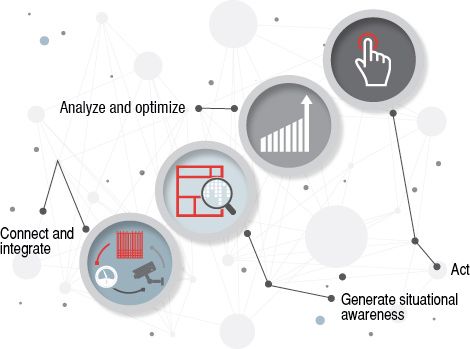 Halpern also highlighted the broader-based cost savings, speed of deployment and other benefits of mPrest's open, integration-friendly systems development environment. “Our Grid Modernization System of Systems is connected to weather feeds, it's connected to Innowatts, its connected to utilities' DR and DER systems, GIS and SCADA and distribution automation or management systems – all relevant, back-end systems,” Halpern told Energy Central.

“If we look at DERMS vendors, they are only solving part of the puzzle, the management of DERs. We offer DERMS as part of our system of systems, but utilities have to solve many more problems and face many more issues and challenges when carrying out grid modernization projects.

In the case of end-to-end automated distribution management systems (ADMS) vendors, the challenge is a little different. “An ADMS vendor typically offers DERMS as part of their offerings, but first they have to upgrade the network.

"That means ripping out existing applications and systems – SCADA, DMS (distribution management system), etc. – which makes for a long-term and risky project. That can take 3-5 years, but it's not only the time involved, it's the risk. You're replacing the systems that control all your assets, and you to wait 3-5 years to address all the issues and work all the bugs and kinks out.”

In contrast, mPrest works with utilities to build interfaces to existing back-end systems and applications so that they can continue to use them. “We do do not have to rip out any systems they do not want ripped out. They get to keep DMS, ADMS or DERMS. We add a command-and-control layer on top of and link to them. As a result, they wind up with a complete, end-to-end grid management solution that's 'vendor agnostic and 'best of breed'.”

We continue our conversation with mPrest's Ron Halpern in an upcoming, second installment of this two-part series.