This Halloween, the impossible is popping up around every corner. It seems that---somehow, some way---a semi-serious discussion of what great seasonal monster the current utility business model reminds us of is leading to actual, real-life outages around the U.S. from Bangor, Maine to San Diego.

Originally, I had reached out to a few industry insiders to get their take on this question: What traditional Halloween monster (ghost, zombie, vampire, werewolf) does the power industry remind you of these days and why?

Terri Morgan, president and CEO of Wudang Research Association and an expert in Energy Central's analytics community, chose my personal favorite, the zombie, adding that her choice was based on "equipment and methods that perhaps should have been decommissioned in the 1990s being "resurrected."

"Who uses COBOL anymore?" she added.

Jim Horstman, retired manager of Enterprise Architecture with Southern California Edison and also an expert in our analytics community, had gone the nicer, friendly route. He chose Casper.

"For those who don't remember, Casper tried his best to be friendly, but because he was a ghost, people were scared of him," he said. "I think that is somewhat analogous to where many utilities find themselves today, especially as it relates customer solar installations. Some solar companies attempt to market their product by painting utilities as the scary, bad guys. Yet many utilities, recognizing that solar and other alternative energy sources are here to stay, are being friendly providing services to their customers to make sure they are informed about their choices, letting them know the processes for installing solar, and working to ensure that their grid can support the alternative sources."

As the fun digital discussion continued, though, our screens went black, then orange, then black again. Then the words: "The choice has been made" filled the screen.

At first, we all thought it a fun joke, but, as reports pour in from around the country, we realize we may have unleashed a monster (or two). Please believe us, though. It was entirely accidental.

We hear from the Pacific Northwest that a hoard of unwashed Sasquatch (Sasquatches?) is invading the Puget Sound Energy territory, creating outages left, right and center---mostly by climbing transmission towers and nesting in them. Having whole Sasquatch families hanging out in the towers has caused them to begin to buckle and collapse.

PSE has dispatched their safety mascot, Safesquatch, to go out and talk some sense into his migrating cousins.

But Sasquatch isn't the only monster causing havoc this Halloween. Apparently, we called up a lot of choices for grid destruction---completely unintentionally, I might add again.

All we got from Bangor was a short scream and then, "Beware the evil clowns!" before the line went dead. So, we're not totally sure what's going on there. Stay tuned for updates and pictures here and on Twitter as we get more information.

Houston is having a mummy problem. Those guys are having a riot unraveling each other and then using their wraps to TP substations, which is causing all sorts of arcs and sparks---much to their delight.

Detroit is seeing frost giants (of the Midgard variety). But that seems to be the least problematic of cases so far. They've been spotted picking their teeth with distribution poles, but it's localized and DTE lineman have already been out to the scene and convinced the giants to put the poles back when they're finished. Then, they'll get to work re-stringing the wires. So, leave it to a lineman to get that problem in hand but fast.

ComEd is chasing werewolves who simply refuse to stop marking stuff, but no details are available.

We got a random report of giant lobsters slicing and dicing their way through underwater cable connections off the East Coast. See lead art for an on-the-scene photo courtesy of Adam Narkiewicz of Datacapable.

San Diego has called in a report on vampires, but it turns out they aren't Dracula-esque. They're talking energy vampires. We've told them that doesn't really count, but they insist energy vampires are just as dangerous as the monster variety.

To get all the details of this Halloween invasion mapped down to the last attack, click here. Zac Canders at Datacapable is following (and mapping) all the live monster action. Just type in a location from this article and see the all the gory details.

Thanks for joining in on our Halloween holiday fun. Obviously, this is all in sport, a la "War of the Worlds." For other Halloween-related pieces, try these: 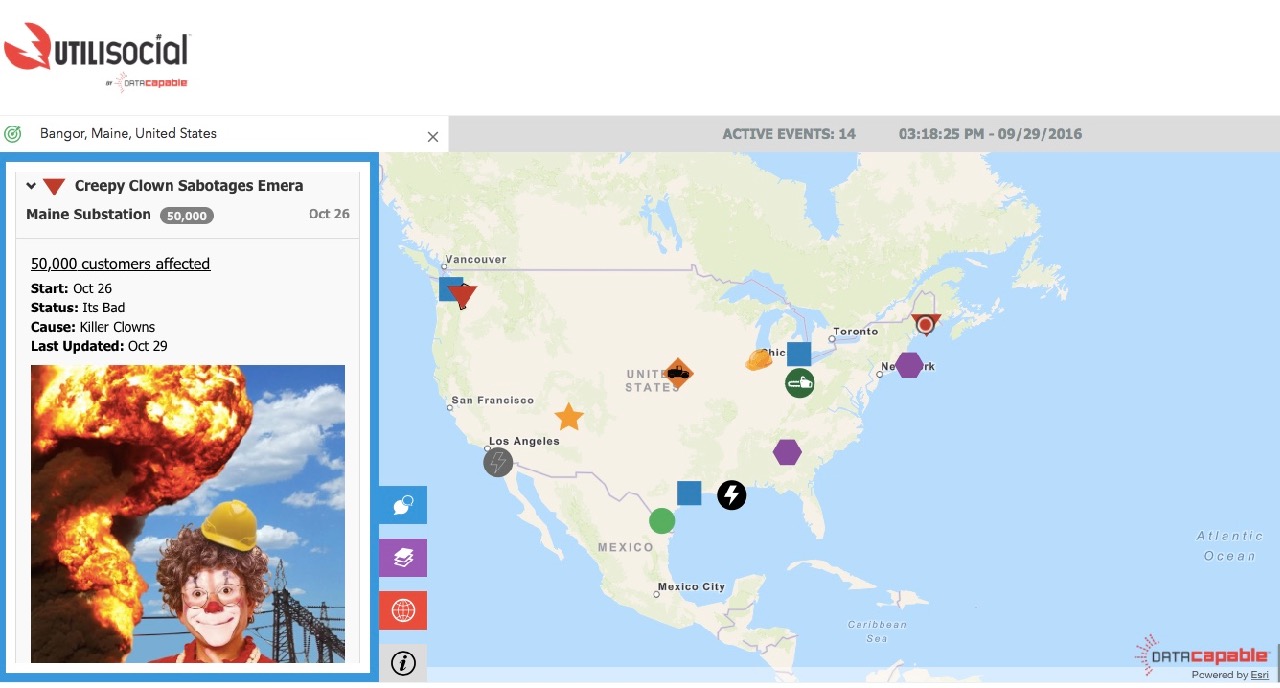 And many thanks to those who helped us create this holiday fun: Zac Canders and Adam Narkiewicz of Datacapable, especially; also Terri Morgan, president and CEO of Wudang Research Association, and Jim Horstman, retired manager of Enterprise Architecture with Southern California Edison. Finally, the creative genius behind a lot of these "sightings" belongs to Isaac Pigott at Southern, whose list of fabulous monster attacks really lit the fire under this article. Thanks the most, Isaac. Really.

Continuous Monitoring is the Key to a Healthy Smart Grid

As the threat landscape evolves and the smart grid becomes more complex, it has become increasingly important for utilities to improve the hygiene of their networks.

The California Public Utility Commissioner determines cost recovery and imposes regulations for the utilities under its remit, meaning that it can substantially influence critical infrastructure risk.  To improve its role in safety, the..

Continuous Monitoring is the Key to a Healthy Smart Grid

Paul commented on ...
Digital Spending Slows Because of Covid Pandemic

No doubt that there are plenty of ways that new technology could help these companies improve their operations.