Despite our growing use and reliance on electronic devices and computing and telecoms networks, most of the forecast investment needed to power U.S. society in coming years will arise from the need to replace or upgrade existing infrastructure – electricity generation, transmission and distribution (T&D) assets. The U.S. Electricity Information Administration (EIA) forecasts that in and of itself, nationwide electricity demand will grow at an annual rate of just 1 percent out to 2030. 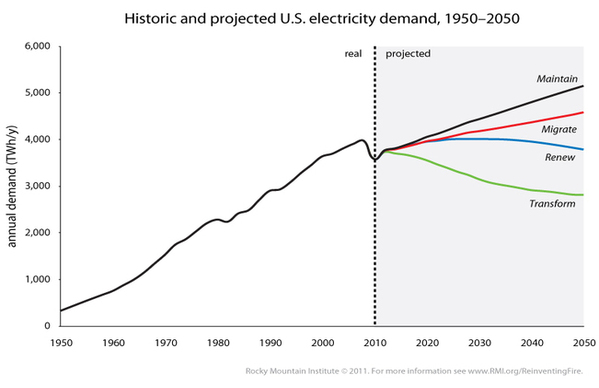 Zooming out to a wider angle perspective, Shell expects worldwide energy demand to double by 2050, however. Most of the anticipated growth will come from emerging and less developed economies and countries where populations are growing fast and urbanization is proceeding at a rapid pace.

The collective decisions we make today regarding how to produce, distribute and use electrical energy will play a major role in determining the quality of our lives, livelihoods and the health and integrity of critical ecosystems for decades to come. Researchers investigating the state of the Earth’s biosphere continue to provide us with ample illustrations of the scope and scale of the challenges.

Material Comfort and Quality of Life

Take air quality in major cities the world over, for example. Air quality indexes in Beijing, New Delhi and other mega-cities regularly reach toxic levels. The costs to society are high and rising, from premature deaths and illnesses to lower productivity, rising healthcare costs and tainted food and water.

From an even broader perspective, our present day “Industrial Age” way of life has brought on the onset of what earth and natural scientists are calling “The Sixth Great Extinction.”

Core to creation of “breathable” air, as well as the food we eat, the clothes we wear, and the fuels we use to light, heat, cool and power our homes and activities, researchers at the U.K.’s Kew Royal Botanical Gardens estimate that 20 percent of the some 391,000 vascular plant species on earth (this excludes mosses, fungi and algae) are in danger of extinction.

Compounding these global, fundamental problems, the ongoing rise in our greenhouse gas (GHG) emissions has been fueling mean annual temperatures to a succession of historic record-highs. In 2015, the average annual concentration of CO2 in the atmosphere breached 400 ppm (parts per million). Modern humans weren’t even around the last time that happened, some 15 million years ago, according to earth scientists.

Just yesterday (Jan. 19) NASA and NOAA confirmed what climate scientists had been expecting: 2016 was the warmest year on record. That marks the first time mean global temperatures have reached record highs for three consecutive years since official record-keeping began in 1880. Of the 17 hottest years on record, 16 have occurred since the onset of the 21st century.

Turning our attention to some important promising trends, the discovery of semiconductors and invention of solid state digital computing and telecommunications has been reshaping economies and societies the world over since the 1950’s. They’ve provided a tremendous boost in terms of our collective ability to come up with the means to resolve our most pressing and urgent challenges.

The confluence of all these, and other, factors has touched off a fundamental restructuring of power markets and industry – the first since the first long-distance electricity grids were built to worldwide acclaim in the early 20th century – as well society-wide discussions regarding how we produce, distribute and use energy.

In a podcast, Tata Consultancy Services’ Frank Diana discusses our shared energy future with distributed energy and grid-edge tech and business development specialitst David Cohen, founder and CEO of E7 Ventures. Their conversation zooms in on solar, energy storage, the Energy Internet and prospects of Blockchain use in the power-energy sectors.

The Future of Energy: A Discussion with David Cohen