Stored energy (especially stored electrical energy) can be used to provide back-up during electrical outages, better manage other electric resources and moderate energy costs. Because the value of electricity varies between high and low demand-periods, there can be a financial incentive to directly store electrical energy or use electrical energy to generate thermal energy during low-cost (off-peak) periods. This energy can then be used during peak periods to decrease peak electrical demand.

Thermal energy is generally stored in some material, and most efficient storage materials employ phase-change. The simplest example of phase-change energy-storage is chilling water until it forms ice using low-cost off-peak electricity, and using the ice for cooling during peak periods. The main energy stored and retrieved in this process is the 80 calories heat-of-fusion per gram that the water emits when it changes from water to ice and absorbs when this process is reversed. There are many phase-change materials that are useful for heat-storage. These range from water (melting-point 0˚C) to manganese (II) nitrate hexahydrate (Melting point 72.2 ˚C). There are also materials that have a wide, stable liquid phase, and thus can be used for thermal storage (salt-compounds from 300˚C to 700˚C, and glass-compounds from 400˚C to 1200˚C).

Kinetic energy storage is primarily by using flywheels. These have been used by electric utilities for regulation services, and there is the potential to use these in similar fast-responding, low energy applications in large facilities.

Electrostatic energy storage uses some form of high-energy capacitors. These are generally called super-capacitors or ultra-capacitors. These devices are really a family of devices with differing voltage, energy and discharge characteristics. In general, they are best used in fast-response, low energy applications (similar to flywheel energy-storage devices), and may be useful for such applications in utilities or large facilities.

Chemical energy storage uses electro-chemical processes (in batteries). Batteries are commonly used in uninterruptable power systems, but their cost is rapidly declining and the capacity of battery energy storage systems (BESS) are increasing. In part, this change has been brought about by increased battery usage in electronics. However the batteries used in electronics are not really large enough for utility applications.

In the last ten years a bridging application has emerged in electric vehicle (EV) batteries. “Bridging” in this case means an application of the right scale to be repackaged in electronic equipment enclosures, racks and weather-proof enclosures or containers to create MW-scale battery energy storage systems (BESS). These are able to deliver megawatts of power and megawatt-hours of energy. The population of electric vehicles (hereafter “EVs”) has grown rapidly in the last few years, and from all current (September 2017) information, these numbers will dramatically increase in the next few years. Consider the following and note that the numbers below do not include hybrids:

Virtually all of the batteries in EVs use Li-Ion technology. Furthermore the delivery of utility-scale battery storage systems are increasing rapidly, and a large majority of the systems currently being shipped use Li-Ion batteries. According to Navigant Research, global revenue for advanced batteries for utility-scale storage is expected to grow from $231.9 million in 2016 to $3.6 billion by 2025.

The storage requirements of a particular application will dictate which storage technique and technology can best address those constraints. Although most applications will require electrical energy, an application where the end-use is for thermal energy (like air conditioning) might be better served by using thermal storage. Ice-based thermal storage is frequently used to shift air-conditioning electric demand from peak to off-peak periods.

Currently (and in the near-term future), battery energy storage systems have the most impact on utility and large-facility energy-efficiency and resiliency.

Most batteries use electrolyte that is sealed in each battery cell. The electro-chemical energy is stored in the anode, cathode and/or electrolyte. Although many chemistries use this architecture, the technologies with (by far) largest sales and most rapid growth use lithium-ion chemistries.

Currently, the lowest battery pricing for utility-scale BESS seems to be around $300/kWh (dollars for energy storage capacity under a typical application) and this is for lithium-ion technology.[1] In comparison, a 2011 Sandia study listed lithium-ion “energy storage subsystem cost” at $600/kWh plus $400/kW.[2]

A comparable recent cost for a smaller BESS might be for the Tesla Powerwall 2 stationary battery system. These each cost $5,500 and store 13.5 kWh with a 7 kW peak output.[3] This includes all of the supporting hardware (including an inverter), and even at this small-scale this is $400/kWh OR $785 per peak kW. Another data point is that Elon Musk (CEO of Tesla) in a tweet exchange: “Musk replied saying that it would cost $250 per kWh for 100MWh-plus systems…” This was in conjunction with an offer to sell very large BESS to Australia to help them alleviate blackouts. Mr. Musk also said he would “…get the system installed and working 100 days from contract signature or it is free.”

Tesla’s Gigafactory is under construction as this is written (October 2017) and is partially completed The Gigafactory is currently being used for BESS (Powerwall 2 and the larger Powerpack 2), and the battery packs and other components for the upcoming Model 3 electric vehicle. By 2020, the Gigafactory is expected to reach full production and produce more lithium ion batteries annually than were produced worldwide in 2013.

Although the basic cell-design of all lithium-ion batteries (hereafter Li-ion) currently being used for utility-scale applications are basically the same, (see figure below)[4], there are various proprietary components within this design used by different manufacturers. The referenced handbook lists 14 manufacturers for Li-Ion. The author has independently identified the following Li-Ion manufacturers that each have completed at least one grid-scale project (below). 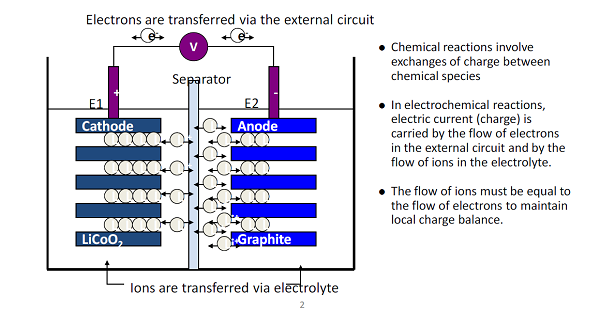 The following table lists the characteristics of MW-scale Li-Ion batteries.[5]

The above subsection covers batteries that depend on electric vehicles for rapidly increasing volume. Vehicular use requires that the batteries used therein be safe, compact and durable. These requirements preclude a class of batteries that operate at high-temperatures and use hazardous material. These include sodium-sulfur batteries and sodium-nickel-chloride batteries. These are covered in this section.

Sodium-sulfur batteries have been used extensively for many years in electric utility distribution grid support, wind power integration, and high-value grid services.[8] They are of the right scale for large to very battery energy storage systems, and have reasonable economics and other characteristics (see table below). On the negative side, sodium-sulfur batteries use hazardous materials, and there has been at least one serious accident in a facility using them.

The sodium-nickel-chloride batteries (a.k.a. ZEBRA batteries), were developed in South Africa in 1985. Currently two companies appear to offer these: FIAMM SoNick and Sumitomo. GE did offer them, but dropped out of this market. They appear to be less hazardous than sodium-sulfur batteries, but presently do not have anywhere near the track-record or proven performance.

The table below defines the most important application characteristics.[9]

Two types of Flow batteries are evaluated in the table below: Vanadium Redox Batteries and Zinc-Bromine Batteries.[10]  Systems using these designs have been delivered in reasonable volumes.

Vanadium Redox Batteries: use two different types of electrolytes (although they are identical when fully discharged), one of which reacts at the anode, and the other reacts at the cathode. This design is the most technically mature flow battery design. At least five manufacturers use this technology.

Zinc-Bromine Batteries: like other flow battery technologies, use two different electrolytes. Both electrolytes are aqueous solutions of zinc bromine, but this solution must be kept separated for the anode and cathode because it reacts differently at each terminal. During charge, elemental zinc is plated onto the anode. Elemental bromine is formed at the cathode. Seven companies use this technology, three are in the U.S.

The table below defines the characteristics of three designs.[11]

Each of the following flow battery types have few, if any, deployments. A brief description of each is given.

There are two other low-temperature technologies that have been around for many years. One, zinc-air, is only addressed briefly because no grid-scale systems have been produced. Zinc-air is used extensively in non-rechargeable applications. The challenge is in the transition to an electrically rechargeable design. The good news with zinc-air is that the manufacturing- and energy-cost should be low. The bad news is that the round-trip efficiency is low. Two companies, Eos Energy Storage, and Fluidic Energy are working on initial designs.

Another technology, lead-acid, is used extensively, but not so much in grid-scale systems. There are several advanced designs for lead-acid that might currently work for the right application, but in future years the economics will probably shift strongly towards chemistries covered in earlier sections. See the table below for details.[12]

[1] Megan Geuss, “Electric vehicle batteries are getting cheaper much faster than we expected”, Ars Technica, July 16, 2015