The market landscape of and conditions for battery energy storage systems has shifted dramatically in the past couple or few years, fueled by new investments, ongoing performance improvements and the continuing decline in costs. Those who were committing substantial amounts of capital and organizational resources to the residential segment of the battery energy storage market just a few short years ago may well have been deemed foolhardy. Events have since demonstrated that even in highly regulated markets, such as those for electrical power and energy, markets and industry can turn on a dime and change radically in short order.

Tesla’s acquisition of SolarCity and the commissioning of its mammoth automotive and stationary lithium-ion battery (LiB) Gigafactory in Sparks, Nevada has been the highest profile market milestone and agent of change, but a variety of other developments – regulatory changes, extreme weather events and new market entrants and exits included – have combined to alter market dynamics and lead industry participants to revise the calculus used to bid and price projects, products and services and assess conditions and prospects in the utility, mid-tier commercial and industrial, and residential segments of the battery energy storage market.

It was little over a year and a half ago that Palo Alto-based startup ElectrIQ Power publicly announced that it had received some 4,000 pre-orders for its IQ System, a residential, cloud and LiB-based home energy monitoring and management system and smart home platform. Energy Central caught up with Director of Marketing Brandon Sanchez and Director of Business Development Aric Saunders to check in and find out what has happened since.

“We've certainly come a long way from last year! Some of the information in those initial featured articles are a bit dated at this point,” Sanchez explained in advance of a telephone interview. “Our main product offering, the IQ System, is now composed of a 7.6 kW hybrid inverter, 10 kWh lithium-ion battery, and other components that I can highlight.”

In addition, ElectrIQ made some other adjustments to the IQ System’s hardware and refined its software. It’s the latter that really serves to distinguish the Silicon Valley-based start-up’s residential battery energy storage and smart home energy monitoring and management system and platform from those offered by the growing number of competitors that have forged into nascent market territories worldwide in the past couple of years – including Tesla with the Powerwall, Sanchez and Saunders highlighted.

“When you start to drill down into our home energy monitoring and management software, you begin to truly see how we differentiate ourselves and bring value to the end-user. I've been positioning the IQ System as the ‘Brain’ of the smart home,” Sanchez said.

That can be summed up in the term “plug and play.” Rather than requiring the purchase, installation and integration of additional key components, e.g. DC to AC inverters, or energy monitoring and management software applications, ElectrIQ has gone the extra yard to ensure that end users can quickly set up and start benefiting from the system and platform right out of the box.

“What's wonderful about our system is it easily integrates for easy retrofits and/or it can be the complete solution for a brand new solar installation. Solar isn’t necessary, but if you do have a preexisting solar array, you won't need any additional inverters or hardware. We wanted to deliver a plug-and-play solution that is completely automated and resolves a consumer's pain points.”

Adopting an open systems approach and framework, the IQ System is designed to be easy to configure and use, modular and easily extensible, a key attribute given the fluid, rapidly evolving state of the nascent Internet of Things (IoT)-driven smart home and energy industry and marketplace.

“We’ve built an IoT platform for interoperability between the IQ System and some of the most popular smart home appliances, including thermostats, refrigerators, hot water heaters, and more. Integrated into the platform, all these elements allow the system to control their power usage, thereby creating additional savings,” Sanchez elaborated. 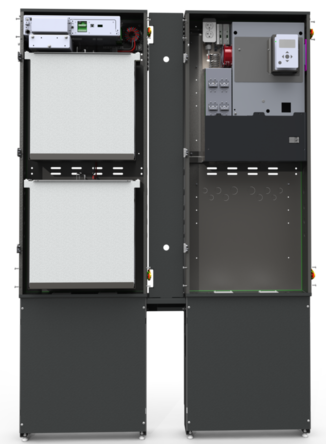 Why enter the residential and not the utility or mid-tier commercial/industrial segments of the nascent US market for stationary battery energy storage? “If you look at the maturity of those markets, it’s a lot harder for a start-up to come in and succeed in the commercial-industrial segment.

"It’s much more capital-efficient for a company such as ourselves to enter the residential market, and there’s a glaring hole in that market segment for something that goes beyond what vendors are presenting.” Saunders responded. “And at the end of the day our focus is on our software.

"There’s a hole in the market for a fully integrated, ‘plug and play’smart home energy monitoring and management system.”

ElectrIQ Power began shipping its inaugural batch of IQ Systems in 3Q. Particularly noteworthy, it recently attained Underwriters Laboratories’ UL9540 certification for the IQ System, which, according to Sanchez, “has opened up a lot more doors than were open to us before.” That includes working with Google-owned Nest to ensure that users of the IQ System find the system automatically recognizes and configures itself to work with seamlessly with the growing diversity of smart home energy monitoring and control devices and equipment making its way on to retail markets.

Solar energy systems installers were prominent among those who placed pre-orders for the IQ System and ElectrIQ has been working closely with a growing number of them to get up to speed and qualify as authorized installers and distributors, particular in its key target market states of Hawaii and California, Saunders continued.

Looking beyond this original strategic marketing and distribution focus on building a network of certified IQ System installers in key markets across the US – more specifically in Hawaii and California, ElectrIQ has been seeing strong interest in the IQ System on the part of utilities. “We’ve probably spoken with 50 or more utilities nationwide, all of whom expressed interest in offering the IQ System to their customers,” Saunders told Energy Central

“If not from utilities, I think demand from CCAs (Community Choice Aggregators) will surprise some people. Deregulated markets and CCAs are well established on the East Coast offering a multiple-value proposition that includes selling emergency back-up power, energy security and grid resiliency. And they could possibly own the assets and use them to bid into aggregated power markets. There are a lot of interesting things happening at present in addition to straight-up solar energy installations and power generation.”