Utilities, in partnership with leading edge smart grid developers, are laying the foundation of a more efficient, reliable and resilient energy infrastructure, one that still needs to live up to touted promises of being economically cost-effective, socially equitable and environmentally sustainable.

There are some 3,000 municipal/public and electricity co-operatives serving customers throughout the US. A leading developer and vendor of smart grid-automated metering infrastructure (AMI) technology, Tantalus recently announced more than 2 million electrical endpoints spanning 150 utilities are now connected to its TUNet (Tantalus Utility Network) distributing computing-communications platform. The large majority are owned and operated by municipal and electric co-ops.

With Earth Day 2018 just around the bend, Energy Central spoke with Tantalus CEO Peter Londa to gain and share insights into the benefits and challenges smart grid-AMI affords utilities and their customers, how the company came to specialize in providing its technology to municipal and electric co-ops, and what smart grid usage portends economically, for society and for the environment.

Grid modernization and the environment

Grid modernization is the order of the day among US, North American and utilities worldwide, and for a variety of reasons. Increasing incidence and intensity of extreme weather events and changing climate, along with pollution, depletion and degradation of ecosystems and the variety of life giving and supporting services and products they provide, figure prominently among them.

Smart grid and AMI technology is helping resolve these issues and alleviate associated economic, social and environmental pressures by enhancing the efficiency, reliability and resilience of water and gas, as well as electricity infrastructure. Improved efficiency results in less in the way of energy losses in transmission and distribution.

Automated, with an increasing amount of data storage and analytics built in at the grid edge where electrical energy is consumed and produced, the latest generation of AMI can reduce grid operations and maintenance costs and reduce the need to invest in new generation, transmission and distribution infrastructure. That, in turn, limits negative environmental and social impacts while reducing operating costs and capital expenditures at the same time.

Smart grid and AMI networking also paves the way for faster, greater grid integration of renewable energy generation capacity. Increasing adoption of solar, wind, biomass and other renewable energy resources is reducing the greenhouse gas emissions that are warming the climate and shifting weather and climate patterns, as well as driving sea level rise and resulting erosion and loss of soil, land and freshwater resources.

Distributed renewable energy, given the variable, intermittent nature of the electricity they produce,  poses substantial challenges to utilities' investments in existing grid infrastructure and the ability to maintain the required, constant balance between electricity supply and demand, however. That's one of the biggest benefits smart grid and AMI system offer.

AMI technology such as that Tantalus offers also enables utilities to create and capitalize on the emergence of demand side resources management (DSRM) – the ability to connect to and adjust electrical and electronic devices, appliances and equipment found in a new generation of smart homes and buildings according to “big picture” grid network conditions.

Zooming in on electric co-ops and municipal utilities 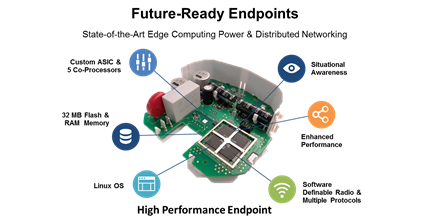 Founded in 1989, Tantalus introduced its first AMI technology product around 1999. That turned out to be fortuitous timing. Electric co-ops in California and Texas, and in Ontario, Canada numbered among Tantalus's first customers. The company has been able to build upon that significantly since, focusing on working with municipal and electric co-ops in particular.

Those initial contracts “were just the result of being in the right place at the right time,” Londa explained in an interview. “We started out deploying our technology with electric co-ops first, then spread out into the municipal utility market. Over time we developed a second, then third-generation technology that could be applied to large and small utilities. We sort of catered to and had great success developing our business model around municipal and electric cooperatives.”

The recent signing of contracts with 24 new municipal and electric co-operatives representing more than 365,000 electric meters vaulted the number of utility grid endpoints connected to Tantalus's TUNet distributed computing-communications platform over the 2 million mark. The ability to embed a growing amount of data acquisition and analytics capabilities and automated control features into its AMI devices and network computing/communications platform lies at the core of Tantalus's success, Londa explained.

“From our perspective, smart metering is part of much broader grid modernization efforts on the part of utilities. Most people might think of the smart meter itself when they think of a smart grid, but what really drives the smart grid is the communications network.

Embedding data acquisition, storage and analytics at the grid edge

“We enable utilities to connect to distributed solar and renewable energy resources, load management devices (both supply and demand side controls) and street lighting controls, as well as smart meters, to obtain data and actionable information in real-time.” Distributed automation and grid optimization tools, particularly those related to voltage, are other focal points for the company, he added.

“The proliferation of rooftop solar across our US utility customers' services footprints holds great benefits environmentally to the homeowner or building manager or owner,” Londa said. “But it can create havoc for a utility that doesn't, or didn't, anticipate building out of grid-edge generation.

“As the price of solar, and energy storage, comes down to the point where it's economically attractive it can drive a lot of computing to the edge of the network where demand is controlled...One of the attributes that makes our system unique is that we were one of, if not, the first smart grid player to embed distributed computing in our communications platform,” he continued.

“That enables utilities to mitigate imbalances between demand and supply at the nearest point rather than at the center. Network capacity is used much more efficiently, the capacity to respond to and manage loads and generation improves significantly. Network latency is reduced, which makes our network exceptionally responsive.”

We continue our discussion with Tantalus CEO Peter Londa in the second part of this two-part article for Energy Central's Earth Day-Energy special report series.

FERC Order 2222 is an historic event that will transform the energy industry into a truly modern and Smarter Grid. Bravo!Under the new rule, regional grid operators must revise their tariffs to establish DER aggregators as a type of market..

Matt commented on ...
Which way to the cloud?

I think there needs to be a series of national NERC meetings (virtual, of course) where there’s a discussion of a) what needs to be changed for BCS t

Do you think the biggest hurdle is that tool/widget itself, or is it how the utility uses them?

And if any water seeps in, just submerge it in rice!

Matt commented on ...
“Communications is a fundamental issue”: NYPA’s Gil Quiniones on Its LTE Network Deployment

It was surprising that a Transmission-only utility has enough use cases and aggregated data needs to justify a broadband wireless deployment but...