The stochastic nature of loads has been a major concern and a persistent challenge both for power system operators and the involved regulating authorities. However, the ever increasing penetration of renewable energy sources (RES) during the recent years has introduced additional factors of stochastic behavior, which affect severely the economics, the technical limits and the operating capability of the power system. Assuming on operator initiatives and/or stricter regulating frameworks implies that the deregulated energy market model will be inconsistent (conventional generators catering for stochastic sources) or that there will be (eventually) a roof to RES penetration.

The Virtual Power Plant (VPP) paradigm represents an abstract organizing and operating structure that may incorporate largely dispersed generation units, storage systems and loads (interruptible and critical), in a way that they can be jointly considered and controlled. Hence, the VPP enables multiple and highly diverse actors to offer services to operators as a single entity. This view does not interfere with network rights and offers a readily applicable, simple and appropriate market model.

The diversity of the actors within a VPP, caters for its capability to better handle any stochastically induced phenomena either from load or RES deviations. To set up the framework, a VPP is expected to participate in an energy market and guarantee that the power, energy and reserves assigned to it will be available and firmly provided to the power system (operator). Although minimal excursions from the VPP set-point can be handled, any major events will require a planned-ahead response, so that the VPP does not suffer missed opportunity costs and/or penalties. To this end, a machine learning approach based on binary decision trees (DT) has been recently proposed. 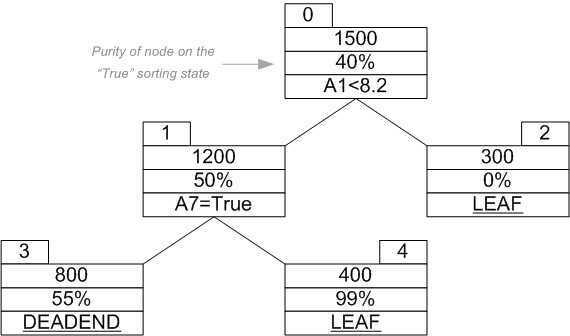 A DT is a tree structure which extracts rules from a learning set (LS) of pre-classified data. For binary DTs the classification is of the type True/False, Safe/Unsafe, 0/1, etc. A rule is the path from a True or False leaf to the root of the DT. The DT is developed based on criteria that split the initial LS to subsets in the children nodes. A particularly common splitting criterion is based on the Shannon entropy. Termination rules are used to avoid over-fitting of the DT to the LS. A leaf is any terminal node whose subset of the LS consists of data that are classified as True/False above a specifically high percent of the size of the subset; all other terminal nodes are called dead-ends. In the figure, an example of a DT splitting an assumed LS on the A1 and A7 attributes of the latter is presented. One of the two rules of that DT is from node 4 and up to the root, reading that if A7 is False and A1 is less than 8.2 then the outcome is True.

Using as a starting point the scheduled operating state of all VPP resources for the next hour (hour-ahead planning horizon) and based on forecast deviations and assumptions on how the reserves assigned to the VPP are or are not depleted, random (Monte Carlo simulated) re-dispatching plans are generated for covering for the loss of the highest injecting actor of that hour. These plans are the LS of the DT mentioned earlier and are each characterized as True or False (i.e. valid/preferable re-dispatching plan or not) based on whether all technical limitations (line and transformer loading, voltage limits, etc) are respected and if the cost of the re-dispatching is “profitable enough” for the VPP owner/operator.

The described control strategy can be properly adjusted to serve also for the reduction of the total VPP power output. This would be applicable in the case the power system operator would be responding to an event of over-frequency, after all down-reserves available were depleted.

The proposed methodology has been tested on various power systems (distribution feeders of the islands of Ikaria and Rhodes in Greece, planned community low-voltage distribution installation in London, UK, etc) and evaluated according to numerous information criteria. Besides any specific results which have proven the favorable behavior of the approach, the methodology itself was designed in a way that tackled also the only inherent weakness of the DT tool; its low predictive power. Furthermore, the technique may be realized in a parallel manner (regarding the generation of the LS), thus limiting any concerns about computation burden to any central processing unit and, additionally, answering also the challenge of scalability when numerous distributed generation units, storage systems and load points are considered.

The idea discussed may boast that it represents a stochastic optimal control approach to a problem that its optimal operating point is not a priori defined and is subject to the online behavior both of the system and the VPP assets.

CV: Panayiotis Moutis is a postdoctoral research associate at Carnegie Mellon University. His research interests lie in the field of renewable sources integration, virtual power plants, microgrids and application of artificial intelligence to power system management and control. For the past two years he has been involved as a technical expert in the IEEE Smart Grid as a member of the Publications and R&D committees. More info about the author at http://panay1ot1s.com.