This item is part of the Advances in Utility Digitalization - Fall 2020 SPECIAL ISSUE, click here for more

Digital technologies are emerging to support distributed energy resources (DERs) in responding to system conditions and providing services to the grid, turning them into flexibility providers. In a nutshell, for the power sector, digitalization is converting data into value. IRENA’s report “Innovation Landscape for a renewable-powered future” identifies 30 key innovations that can reduce the cost of integrating large shares of renewables in today’s power systems (IRENA, 2019). Several key digital technologies, in particular, are unlocking new possibilities in the power sector, changing the boundaries and dynamics of the industry and helping to optimize renewables assets: 1) Internet of things; 2) Artificial intelligence and big data; and 3) Blockchain.

While important questions linked to data privacy, cybersecurity and governance are often raised, these challenges may be largely solvable by the technologies in question, which allow for granular control of data never before possible, along with various governance models and levels of security and “openness” based on an application’s specific needs. The new applications enabled by these technologies have the potential to bring great value to the entire power system, from small consumers to big producers, to system operators. These digital technologies are already supporting the integration of variable renewable energy (VRE) sources, - like solar photovoltaic and wind - , through faster response, better management of assets, connecting devices, collecting and sharing data.

To meet national and international climate and energy targets, including the Paris Agreement [1], we need to scale up the renewable share in electricity generation from 26% in 2018 to 86% by 2050 (IRENA, 2020a). As renewables increase power sector complexity, requiring more flexibility, new tools are needed to optimize power system operations. In this context, Internet-of-Things plays a key role in data generation by capturing vast amounts of granular data with a network of devices containing sensors, in addition to executing commands (two-way communication); Artificial Intelligence and Big Data support decision-making by automating the data analysis, improving learning and decision-making via software and smart devices; while distributed ledger technologies, including Blockchain, promise to provide open and secure management of data, while also allowing for the automation of contract execution via so-called “smart contracts”. 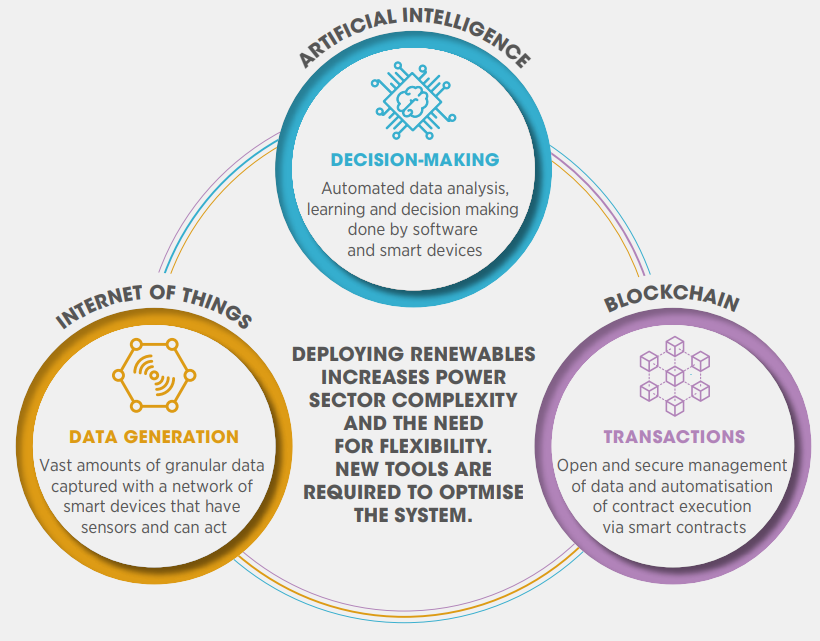 The growing relevance of digitalization is highlighted by the advancements in decentralization and electrification, which are two other key trends observed in the power sector transformation at a global level. Decentralization is lead by the deployment of large numbers of new small generators, mainly rooftop photovoltaic power plants. The electrification of end-use sectors involves large quantities of new loads, such as electric vehicles, heat pumps and electric boilers. All those new assets on the supply side (due to decentralization) and demand-side (due to electrification) have an impact on power systems, making monitoring, management and control crucial for the success of the energy transformation. Digitalization becomes therefore increasingly important in complex power systems.

As shown in Figure 2, the digital applications are multifaceted for the integration of renewables in today’s system and range from predictive maintenance, to ensuring grid stability and reliability, to renewable energy forecasting, as well as trading, and automated energy demand management, to mention only some examples. 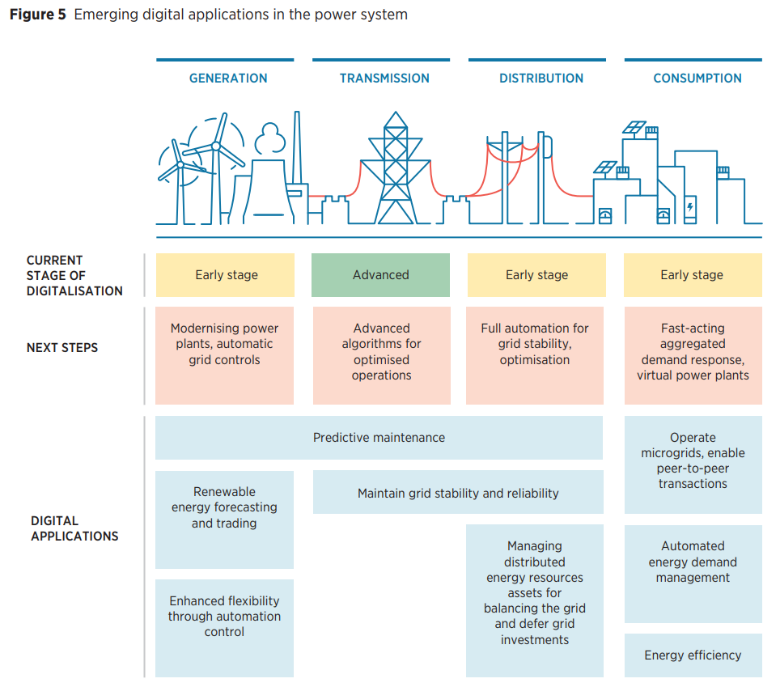 These three key enabling technologies, enable various other innovations which require some form of digitalization as a pre-requisite for implementation.

One example is an innovative business model, Energy-as-a-Service (EaaS), emerging in Australia, China, Finland, Ireland, Italy, Japan, Sweden, UK and the USA, Among others, EaaS offer various energy-related services to the consumers, rather than only supplying electricity, as is done in a conventional business model. Through different service provision and revenue models, EaaS supports the deployment and operation of DERs and demand-side management, which - in turn - unlocks demand-side flexibility. Digital technologies such as IoT (via smart meters, sensors and smart appliances) and sometimes even AI are key enablers for this business model. Currently, the penetration of smart meters is estimated at 14% globally, and the EaaS model can reduce peak demand by 3-10%.

Another innovation enabled by digital technologies is a dynamic line rating (DLR). DLR refers to the active varying of presumed thermal capacity for overhead power lines in response to environmental and weather conditions. This is done continually in real-time, based on changes in ambient temperature, solar irradiation, wind speed and wind direction, with the aim of minimizing grid congestion. DLR reduces congestion on power lines, optimizes asset utilization, improves efficiency and reduces costs. This permits increased solar and wind integration to reduce curtailment for these VRE sources and makes power generation dispatch more cost-effective. For its implementation, DLR requires complex algorithms to calculate ampacity, digitalization for real-time monitoring, communication and control, advanced weather forecasting, all enabled by IoT and AI technologies. Several transmission system operators in Europe, including Amprion (Germany), Terna (Italy), RTE (France) and Elia (Belgium), are implementing this innovation. At the same time, Oncor Electric Delivery, a US utility, implemented DLR and observed ampacity increases of 6-14% for 84-91% of the time.

In addition to these two examples, IRENA explored other innovations which have as an underlying enabling factor one or more of these three digital technologies, including Electric Vehicle smart charging, renewable mini-grids, aggregators, peer-to-peer electricity trading, community-ownership models, net billing schemes and advanced weather forecasting (IRENA, 2019).

[1] An agreement within the United Nations Framework Convention on Climate Change (UNFCCC) dealing with greenhouse gas emissions mitigation, adaptation and finance starting in the year 2020, signed by representatives of 196 parties at the 21st Conference of the Parties of the UNFCCC in Paris, France in 2015.

Among others, EaaS offer various energy-related services to the consumers, rather than only supplying electricity, as is done in a conventional business model.

This may have seemed like an odd place at the turn of the century, but the customer-utility dynamic really is changing. Utilities mustn't look at customers simply as end users. Customers won't be looking at utilities as simply the source of that once-per-month billing touchpoint. They will truly become partners in the new prosumer environment.

Elena-- how do you think that evolution will play out as it relates to the types of programs utilities can offer? For example, energy efficiency programs were often a key way to engage customers on a deeper level-- but will the digital technology opportunities enhance those programs in a unique way?

Very interesting, Elena. Thanks for sharing!

The State of Utility Digitalization in 2020.

The future of digital substations

Build vs Buy: Where Utilities Should Dedicate Resources for Enterprise Integrations

How has the implementation of utility digitalization strategies changed the way your utility interacts with its customers?

The Road to Digitalization Shouldn’t Have Data Potholes