What Are Renewable Energy Credits, How Do They Work, and Why Do They Matter? As the U.S. has rushed to decarbonize its electric grids, a number of approaches to accelerate the growth of renewable energy have been developed. Among them are Renewable Portfolio Standards (RPS) that have been put in place by many states. These stipulate minimal levels of carbon-free energy that must be purchased on an annual basis by utilities or other large buyers such as retail energy suppliers. There are also green power purchase agreements through which various organizations voluntarily commit to buying clean power. Whether through RPS or voluntary purchases, all of this renewable electricity must be tracked and accounted for, to ensure that there is no double counting and desired outcomes are achieved. At the heart of this system lies the concept of the Renewable Energy Credit, or REC. Here, we will explain what RECs are, how they are created, tracked, bought, and sold, and why they matter.

The notion of a REC is essential to all clean energy generation projects in the U.S. RECs are created on a per megawatt hour (MWh) basis, with one MWh of clean energy generation equal to a single REC. RECs are defined by the Environmental Protection Agency as “a market-based instrument that represents the property rights to the environmental, social, and other non-power attributes of renewable electricity generation.” In basic English, that means that every time a MWh of renewable electricity is generated and delivered to the grid, a REC is created with all of the characteristics of the associated generating asset. The most critical of these attributes include: a unique tracking ID (each REC has its own distinctive identifier), the type of renewable from which it was generated, the location, name, and date the associated generating asset was commissioned, and a vintage (the date the specific associated MWh was produced).

The REC is carved off from the generating resource

The REC thus embodies the renewable nature of that MWh of energy, and – critically – it can be sold separately from the actual energy itself. This allows the owner of a designated renewable asset to sell the REC and generate additional income from a separate revenue stream. It’s important to understand, though, that if the owner sells RECs to a third party, the electricity delivered from the renewable asset into the grid is now no longer considered carbon free. Since it’s green nature was sold, now it’s just basic system power, possessing the same carbon intensity as the electricity in the rest of the grid.

The buyer then has two options: sell the RECs to a third party (the values can vary over time, so some buyers purchase RECs as an investment strategy) or retire them, so they are no longer active. The party retiring a REC has the right to assert that it has accounted for and decarbonized one MWh of its own electricity consumption.  Once a buyer has made a claim of that nature based on a REC, that REC is considered used and no longer viable.

What renewables are associated with RECs and how are they tracked?

The question of what assets can generate RECs is a simple one, but the answer is unfortunately more complicated. Various states have designated a variety of eligible resources – especially for RECs that establish compliance with specified RPS requirements. While every state that has an RPS requirement recognizes solar, wind, biomass, and landfill gas as eligible renewable resources, there is far less consistency with respect to other resources. Biogas, municipal solid waste, and tidal power are examples of some resources that some states allow, while others do not. The case of hydropower gets extremely tricky, as some states recognize any source of hydro as REC-eligible, while other states stipulate that the hydropower must be either new or from smaller facilities.

To further complicate issues, various states have different views as to how long a REC is viable - the so called “shelf life” - with New England RECs expiring at 3 months, while Nevada and Wisconsin RECs are good for four years.

RECs are registered and accounted for in two main ways: manual and web-based, with about half the states employing one of five internet-based systems. As can be seen from the visual from the Rhode Island Public Utilities Commission 2021 RPS report, a variety of different resources are eligible and tracked. 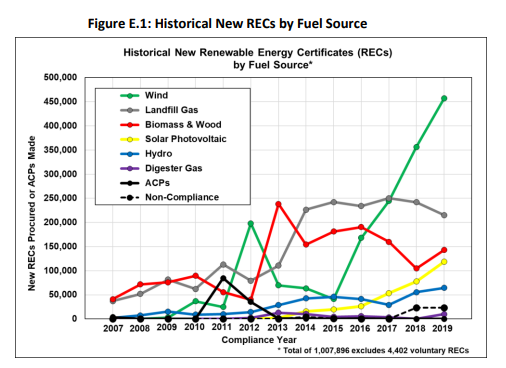 Compliance markets require those entities that sell electricity - such as utilities or competitive retail electric suppliers - to include a designated portion of renewable energy in their mix (a percentage that often increases over time). Those actors may either own renewable assets (with the associated RECs) to meet their obligations or buy RECs in the marketplace to meet their RPS obligations.

In addition, there is a voluntary renewable electricity market for companies and institutions seeking to reduce their Scope 2 electricity-related emissions (as discussed briefly in our March 8, 2022 post, The E in ESG). In this case, purchasers voluntarily buy and retire the RECs, claiming the associated environmental benefits. As one can see in the visual below, the volumes of both voluntary and compliance RECs have increased significantly in recent years.

A growing appetite for RECs 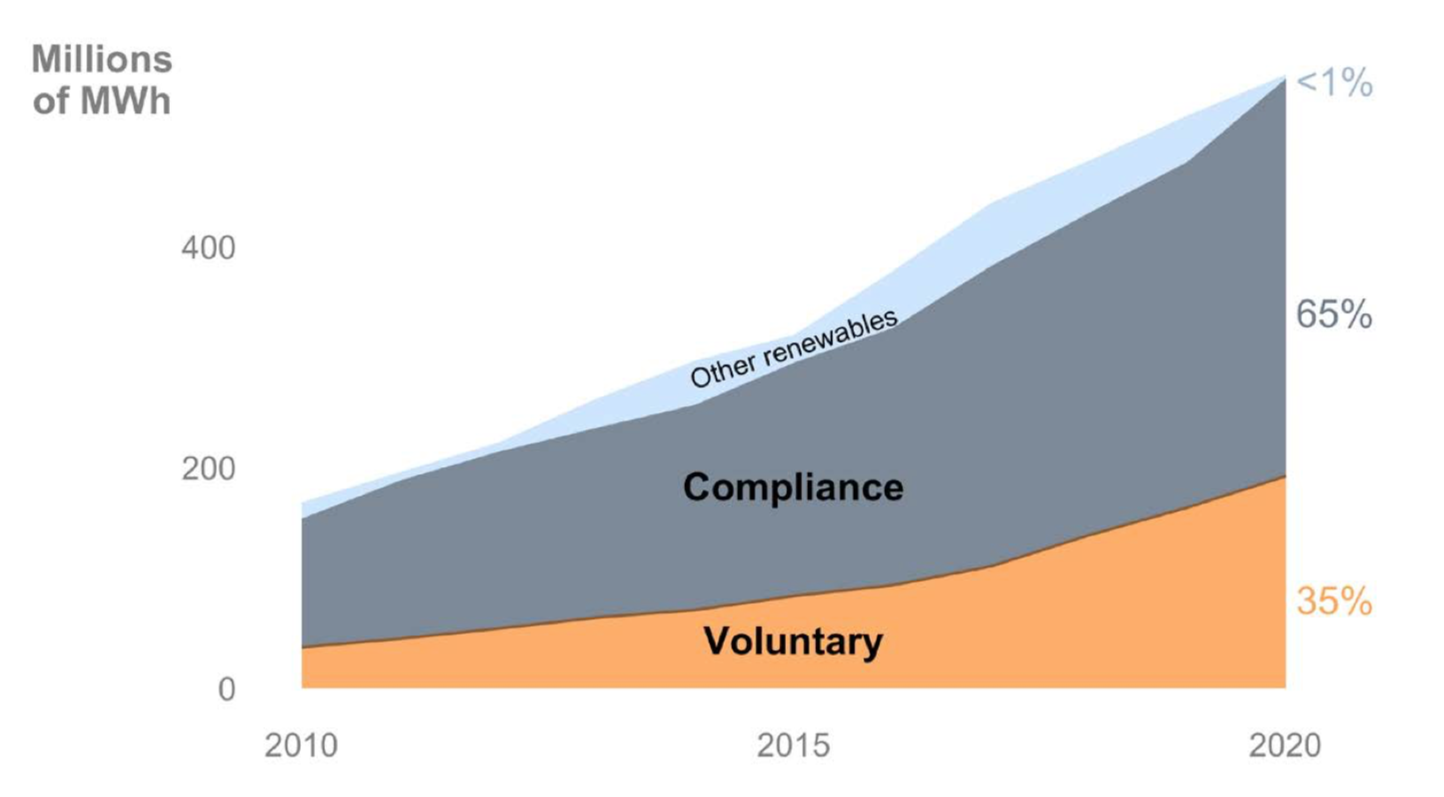 To bundle or not to bundle?

To further complicate the “who’s who in the zoo” of terminologies and requirements, RECs can be either “bundled” or “unbundled.” Bundled RECs are tied to a specific project that is involved in a purchase power agreement between the renewable asset owner and a buyer (there are different types of contracts, but we will save that complexity for another discussion).

Unbundled RECs are generic RECs that are not associated with any specific renewables project or associated delivery of energy. Since they are not tied to a specific project, they can be sold anywhere in the country, providing a great degree of flexibility to the buyer who is looking to neutralize carbon emissions. However, because these unbundled RECs are not tied to a specific asset, they do not create any “additionality.” That is, they do not help support the development of a new project that might not otherwise have been built. For that reason, they are less valued in the market and typically trade at a lower price. That said, the price of unbundled RECs has increased a great deal in recent years, as more organizations with environmental, social, and governance (ESG) commitments focus on mitigating their carbon footprints (a recent U.S. government report on the topic noted that between December 2020 and August 2021, prices of unbundled RECs soared from $1.50 to $6.60 per MWh).

As can be seen from the figure below, the voluntary market has grown considerably in the past decade. It is likely to continue growing in the visible future, as more companies face pressure to green up their energy use.

A growing number of volunteers enlisting in the green campaign 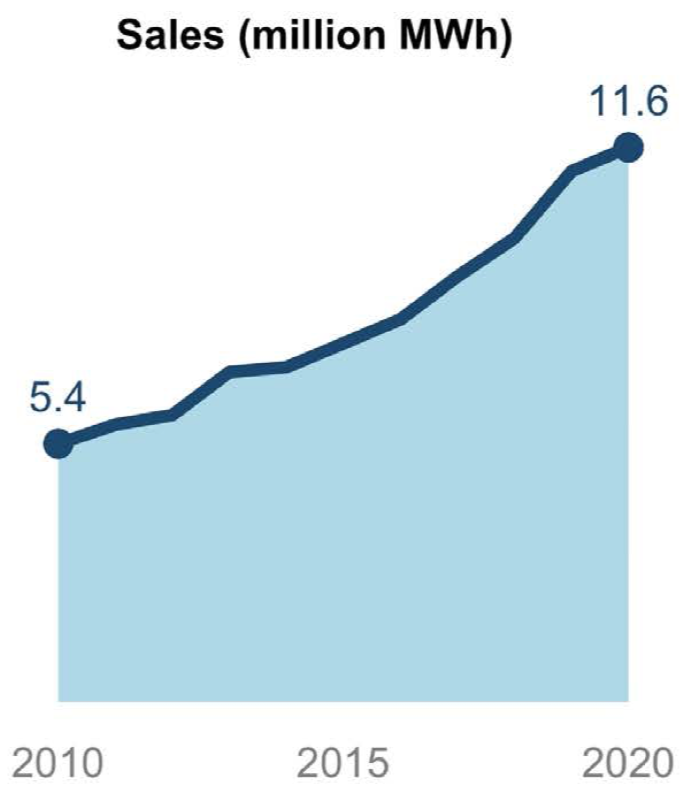 Companies seeking to demonstrate their intention of being responsible corporate citizens generally buy bundled RECs, since they can point to specific projects they have supported. A very recent example highlighting difference between bundled and unbundled RECs occurred in mid-May of 2022. EV charging company Electrify America committed to a 15-year, 75 MW power purchase agreement tied to a specific solar project that would be equal in volume to the energy used in its network of charging stations.

The company had previously been purchasing unbundled RECs, but stated in its press release that it will be “supporting the key sustainability goal of "additionality," meaning that this arrangement would result in new, additional renewable energy generation…purchasing and retiring all bundled environmental certificates associated with the new solar project over a 15-year period, shifting away from the business-as-usual approach of buying environmental certificates from a third-party supplier on an unbundled basis, which does less to support additional renewable energy generation.”

What do you think is the best way for us to ensure RECs get used where they are beneficial but they don't amount to something of a 'get out of jail free card' by companies who aren't directly reducing their emissions?

I had a signed contract from a company in Chicago but they then cancelled on the contract and never paid me anything. I own my home system that makes more than I use and 3 Large Public PPA systems on churches and 1 on a school in Sunny Arizona. If I got the Credits I could do even more systems.I could also add Battery Storage to help in the Duck Curve hours.

Thanks, Jim - SRECs/solar are the best in meeting peak - initially. Then, as the solar resource begins to saturate the system, the planning paradigm shifts to looking at the generation net of renewables (the California Duck curve) and the concept of which resources can best help meet peak, which shifts to the evening. The concept is known as effective load-carrying capacity or ELCC. ISOs from California to NY and NE are all looking at this issue, as renewables begin to pile into the system, and dispatchable generation (especially coal) exits the scene.

You may find the following document of interest:  https://www.nyiso.com/documents

It’s a little geeky, but it exemplifies what planners are having to deal with as grids decarbonize.

… kind of reminds me of derivatives. Financial scheme created by Wall-Street to line their own pockets at the expense of the public, replete with all manner of unintended consequences.

Just get rid of REC. Let the marketplace function with the actual cost of energy the key driver.

One could let the marketplace function without RECs, which if one were not to apply a carbon tax would mean that renewables compete with carbon-intensive generation resources that pay no costs for causing economic damage and depreciating the future quality of life of our children and their descendants. If we were to properly tax carbon, then the comparative advantages of renewables would be rewarded. In the meantime, this appears to be the best we can do given our societal approach to carbon.

What are feelings on the controversy surrounding what qualifies for renewable energy credits?
According to a report by Public Employees for Environmental Responsibility (PEER) in February 2022, 35 percent of Maryland's "clean energy" in 2020 came from questionable sources.
Also, if the state is allowed to pay a fee instead of purchasing a specific percentage of renewable energy credits, is the program still working?  Are customers actually getting the opportunity to participate in the transition to renewable energy?