AutoGrid has a 10-year history in demand response, virtual power plants and distributed energy resource management system applications. The recent acquisition by Schneider Electric creates the most scalable & complete solution suite for DERs in the world. Peter Asmus has over 34 years of deep experience analyzing, forecasting and writing and speaking about cutting edge energy and related environmental topics. He is author of four books: In Search...

Across the U.S., grid operators and other key stakeholders are sounding alarms about capacity shortages this summer due to expected heat waves and other stresses impacting existing power grid infrastructure. These alarms are linked to global climate change but also reflect a lack of grid modernization that supports the transition to a net zero carbon economy. Supply chain shortages, escalating prices for fossil fuels linked to the Ukraine military conflict and other global trends will have a major impact on energy markets in the U.S. this summer. Consider the following:

Traditional solutions to short-term supply shortages -- such as fossil fuel peaker plants – may meet the need for immediate capacity yet help accelerate climate change due to high emission rates. Transmission upgrades are vital to help build the net zero carbon grid of the future to help integrate large scale solar and wind farms into the nation’s power grids. But building transmission lines is contentious and time-consuming. Grid operators are seeking near-term solutions that leverage existing distributed energy resource (DER) assets and which are nimble, which can respond to the real-time dynamics of peak demand and supply, while remaining affordable. What the market needs are cleaner sources of energy that can also meet consumer demands for a more resilient and sustainable energy future, but which allow utilities to follow through on their obligations to serve mandates.

integrate these resource types to ease various simultaneous operational challenges optimally. rooftop solar arraysresidential storage systemsEVs  If one gets into the weeds, there are other challenges attached to DER integration as well (see figure below.) 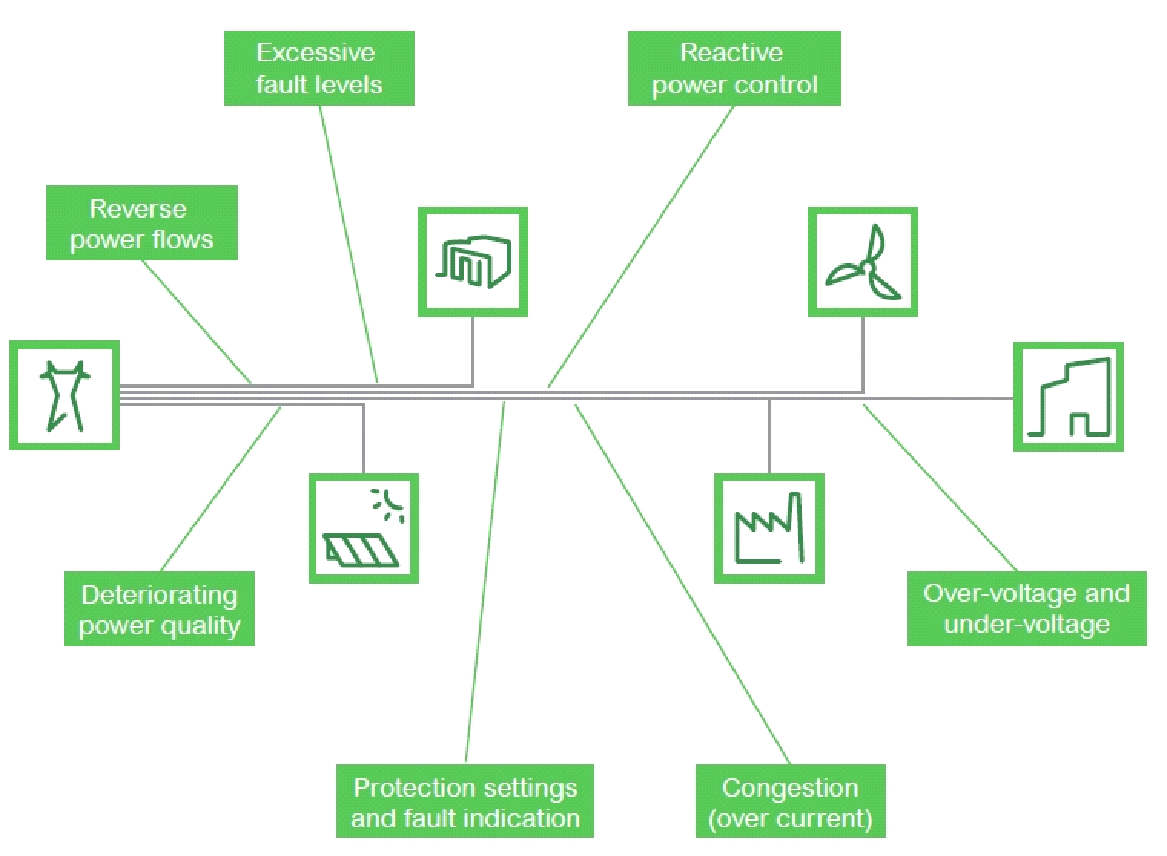 Traditionally, distribution utilities had no way to aggregate these resources in specific local areas to best take advantage of them. As market structures evolve to compensate DERs for grid services, this is changing. The combination of market reforms -- and advances in artificial intelligence (AI) and other digital technologies -- have set the stage for an energy revolution.

As emerging power markets for the hedging/arbitrage and ancillary services that DER can support become operational, distribution utilities will need tools to integrate and aggregate the various DER to participate and benefit in these markets. Yet this will only be possible if markets are reformed intelligently.

In addition to FERC 2222, relevant state regulations shaping a new energy paradigm vary widely. For example, the state of Texas is not under FERC jurisdiction because Texas is a separate Interconnection, but that suffered debilitating winter storm outages in February 2021). A recent analysis conducted by Guidehouse Insights shows that there will be enough DER capacity coming on-line in Texas to theoretically displace the state’s large fleet of dirty fossil fuel peakers by 2030. One could argue this independent balancing authority makes DER management even more important since Texas boast the most variable wind capacity of any U.S. state.

On the other end of the political spectrum, ongoing and potential future regulation such as proposed changes to net energy metering (NEM 3.0) in California  -- which would provide fixed-cost compensation to California investor owned utilities for each distributed solar system installed – could provide incentives for distributed energy storage and other ways to maximize the bi-directional value of DER assets. An automated dynamic retail rate pilot programs in process in California, also plants seeds for future flexibility solutions as does the discussion of a  system operator (DSO) model adoption in a handful of U.S. states.

VPPS and DERMS Integration is Key

Tracing the evolution of DER-based flexibility services – a broad umbrella term encompassing concepts such as demand response (DR), virtual power plants (VPPs) and distributed energy resource management systems (DERMS) – follows the evolution of public policy initiatives (such as FERC Order 2222.) These changes in public policy have moved the market from point solutions to a more integrated and comprehensive approach to DER challenges. Moving toward a common platform approach for the full gamut of DER assets addresses the challenges facing utilities in navigating the current energy transition. This unified and comprehensive approach accelerates the synergy now possible when combining assets owned by utilities and assets owned by prosumers to meet demand spikes. (This latter term refers to consumers that now also produce or reduce energy through on-site generation and/or creative load management technologies.)

What is a VPP? Here’s one definition: A system that relies upon software and a smart grid to remotely and automatically dispatch and optimize DER via an aggregation and optimization platform often linking retail to wholesale markets.

In the U.S., VPPs started with demand response: the concept that ratcheting down demand at precise moments of peak demand had the same impact on power grids as short-term increases in supply. Note that VPPs are focused on pricing signals to trigger events. As noted in a recent article in Energy Central, these VPPs can displace fossil peaking plants that are both expensive and polluting. VPPs can resolve systemwide frequency deviation issues, but they also provide high-value clean energy capacity and other energy-related services.

An untold story about VPPs is how they can address the social costs embedded in current status quo solutions to meet the summer spikes in demand expected this year. At present, there are more than 1,000 dirty peaker plants that will be called upon this summer to keep power flowing throughout the U.S. Not only are most of these peaking plants sited in low-income and minority population communities, but they are only utilized 5% of the time, cost 1,300% more than the average electricity cost and produce twice as much carbon dioxide emissions as the average U.S. resource mix , according to a forthcoming report to be released by the Digital Economist this July. (The report's findings will be featured in Energy Central upon its release.) If the social costs of pollution are factored into the equation, it is clear that VPPs are the superior solution to summer peaks (see below.) 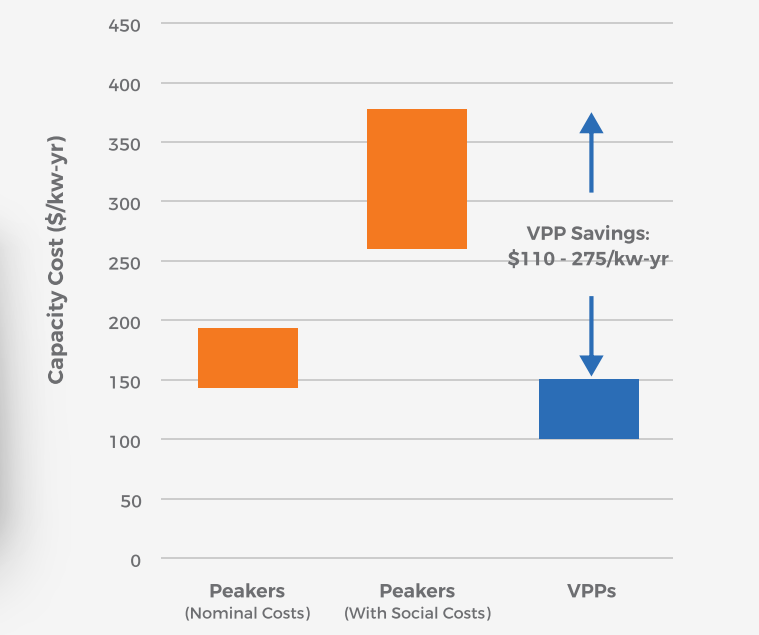 What then is a DERMS? And why is this concept a key to realizing the net zero carbon goals being embraced by regulators and private corporations alike?

The process of interconnecting and then managing large numbers of DER assets is not straightforward. This new market dynamic introduces higher levels of heterogeneity, decentralization, and number of end-devices, all challenges that require precise, real-time data management systems. It is challenging to scale the traditional relationships between an independent system operator, utility companies, and end devices with such a rapid growth of forecasted DERs. Market leaders in the DER solution space, such as Schneider Electric, have devised a new Grid to Prosumer approach. It aims to address this need of data analysis by incorporating DERs into the operating procedures – via integration with an advanced distribution management system (ADMS) – to provide a hedge against higher-priced resources, ease local grid congestion, enhance local voltage regulation, and respond to local emergency operating needs.

The concept of DERMS recognizes the challenges VPPs pose to utilities by addressing the physics of grid integrity. Building upon an ADMS framework, DERMS seeks to address voltage sags and surges in a surgical way through active power management on specific feeders of a utility distribution network. DERMS addresses utility and grid operator concerns attached to the shift in relying upon DER assets to provide capacity and energy, while recognizing the supportive grid services required to make this vision a reality. In short, VPPs and DERMS are ideally interactive and synergistic. Best to integrate both platform needs in a single, seamless common platform that leverages a best-in-class solution ecosystem.

Conclusion: Linking Flexibility to the Need for Reliability and Resilience This Summer

Grid flexibility is becoming increasingly important in the worldwide transition towards greater reliance upon intermittent renewable resources. The increased demand being imposed upon existing grid infrastructure due to the increased electrification of buildings and transportation only further builds the business case for flexibility. For example, if a cluster of flexible resources -- such as an EV fleet -- could prevent the operation of a fossil fuel power plant, this could be a cheaper and cleaner option to meet reliability and resilience needs while simultaneously shrinking carbon footprints.

With increased frequency of extreme weather events (such as recent heat storms), transmission and distribution system congestion, and proliferation of intermittent resources on the grid, resiliency and reliability are now paramount. Both the transmission and distribution systems need to be optimized through bridging platforms such as VPPs and DERMS.

Effective DER management can increase local resilience during extreme weather events because DERs reduce dependence on imported fossil fuels. They also reduce reliance on transmission and distribution networks which deliver power over long distances from centralized power plants. Operators can also use aggregated pools of DERs to deliver power back to the grid to provide resiliency during blackout events.

Today’s energy industry is looking for comprehensive DER management solutions. With the acquisition of AutoGrid by Schneider Electric, electric utilities and other market players now have the opportunity to address the entire life cycle of DER management, venturing into adjacent markets that encompass DER assets such as microgrids under an energy-as-a-service business model. With the ability to work with other Schneider Electric partners such as Uplight, AutoGrid can now deliver multi-asset, multiple service flexibility solutions ranging spanning VPPs, DERMS and microgrids – all under a turn-key basis, delivering clean energy and capacity in real-time. Each of these platforms represent solutions to this summer’s peak capacity shortfalls.

These are real solutions. They respond to the emergency needs of power grid operators in the U.S. not only this summer, but also year-round across global markets. Utilities wisely reinventing themselves today can now seize the moment and take concrete steps today to be prepared for a new energy paradigm that is drawing near and which offers tremendous opportunities for public good and private profits.  Look for the Digital Economist's forthcoming report, underscoring how DERs, if wisely aggregated and controlled, also produce immense social value by democratizing out future energy systems. 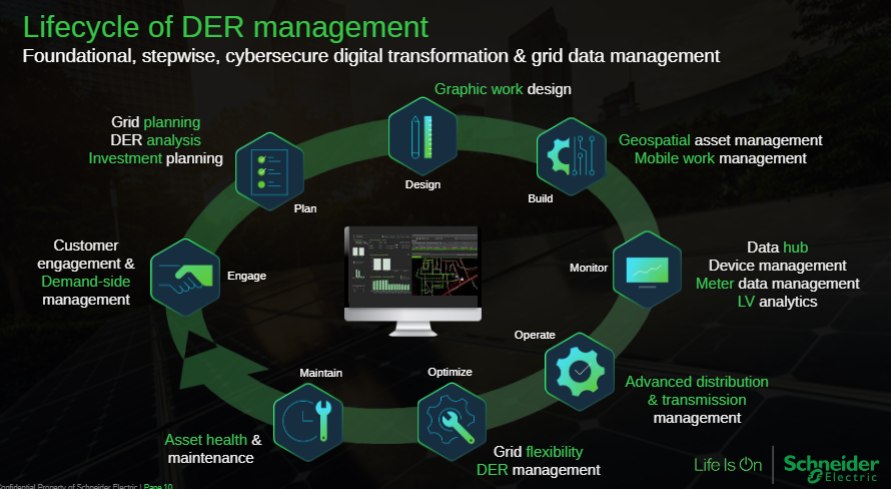