Storage by the Numbers

It is important to remember that the 10 MWH available from the storage system must first be provided by the wind turbine or solar array. US EIA Electric Power Monthly reports that a 2.5 MW wind turbine would have produced an average of 21.2 MWh per day in 2020, while a 2.5 MW solar array would have produced an average of 14.5 MWh per day. Therefore, the electricity stored in the batteries would constitute half to two-thirds of the total electricity output of the generators on an average day. In this example, the storage system would be capable of providing more electricity to the grid in 4 hours than the renewable generators did in the remaining 20 hours of the average day.

While these 4-hour storage systems would provide some ability to tailor electricity supply to demand load shape, they would add little to electricity supply reliability during periods of low/no wind and solar availability. Storage systems designed to provide continuous electricity delivery to the grid during multiple hours or days of low/no wind and solar generation are referred to as long-duration energy storage. California has recently solicited bids for such systems with a capacity of 50 MWh or greater and a delivery time of 8 hours or greater. While such systems would represent a significant advancement of the state of the art, they fall far short of the requirements for a storage system which could continue to supply electricity to the grid through a “wind drought” such as the recent ten-day event experienced in the UK.

Form Energy claims to have developed an iron/air storage battery capable of continuously delivering electricity to the grid for up to 150 hours, or about 60% of the duration of the UK wind drought. Such a storage system for a 2.5 MW wind turbine would require a storage capacity of approximately 130 MWh, which would first have to be provided by the wind turbine. Initial estimates place the cost of such a system at approximately $20 per kWh, or approximately $2,600,000, not including installation and land costs.

What does this mean?? Why on earth would anyone pair a 2.5MW/10MWh system with a 2.5MW wind or solar system. The US electricity system provides about 4,200TWh per year or an average of 480 GW. Of that approximately 2,500 TWh comes from fossil fuels or an average of 285 GW. There is 730 GW of Fossil Fuel capacity on the US grids, allowing for normal availability and demand variations that should be able to run at an average 520 GW, in other words the fossil fuel capacity on the US grid averaged about 40% of its nameplate capacity and 70% of its practical capacity. I.e. to ensure the system is reliable it has far more capacity than is theoretically needed.

So coming back to the 2.5 MW wind turbine or solar array probably needs 0.3 MW/1.8 MWh of storage and  providing. If that was the case and the US has 2,100 GW of wind and solar that will be 250 GW/1,800 GWh of additional storage. Combined with 90 GW from nuclear and 60 GW of hydro that will more than meet peak demand of about 630 GW even with zero generation from all other sources. So rather than needing one for one storage you need < 0.12:1. That is assuming you ignore smart charging of EVs, flexible demand, energy efficiency, hydro peak capacity upgrades, expanded geothermal and waste to energy, hydrogen, etc etc In summary your claims are out by at least an order of magnitude and possible double that.

Two issues: "all-electric everything" would require a grid roughly 4 times the capacity of the current grid; and, storage, once discharged, must be recharged.

Averages hide extremes. A UK-style wind and solar "drought" would likely crash a grid with so little storage.

The grid certainly needs storage and the US grid also has hydro and nuclear which it will obviously have for a long time. In addition it will have waste to energy and geothermal. Demand response can clip peaks and absorb excess wind and solar. Hydro can be ugraded without new dams to supply about 30% more peak power.

Due to the 3-5 times higher efficiency of electric heating and transport, the grid with be about 2.3-2.8x larger not 4 X. Then just as the US grid has almost 780GW of fossil fuel power which actually runs at an average of 320 GW it will end up with enough wind and solar to average about 1,000 GW so it will probably have 2,500-3,000 GW of solar and 1,000-1,500 GW of wind. Somewhere between 20-35% of the output will not be used just 80% of the potential output of combustion turbines and 50% of the potential output of coal plants is not used today. If it has so much capacity, on the worst week wind and solar will still supply 65-70% of demand hydro and nuclear about 20-25% other renewables about 3% and storage/backup 5-10% max.

The US has about 1/6th of the population density as Germany and 25 times the area. By 2030 Germany will be generating about 550 TWh/y from onshore renewables. The US has better sun, wind and hydro resources and more open space per person so it should be able to generate at least 20% more renewables per square mile than Germany so 1.2 x 25 x 550 = 16,500 TWh + 700 TWh from nuclear is 420% of current electricity demand. Allowing for electrification of 95% of the economy, there would be a surplus of 45% in the average week

I will be more comfortable when that is demonstrated at scale.

Some other thoughts on storage requirements:

Let's see how much Battery Storage ERCOT adds over the next few years as it continues to grow its zero -carbon share. Below are planned solar and battery additions. 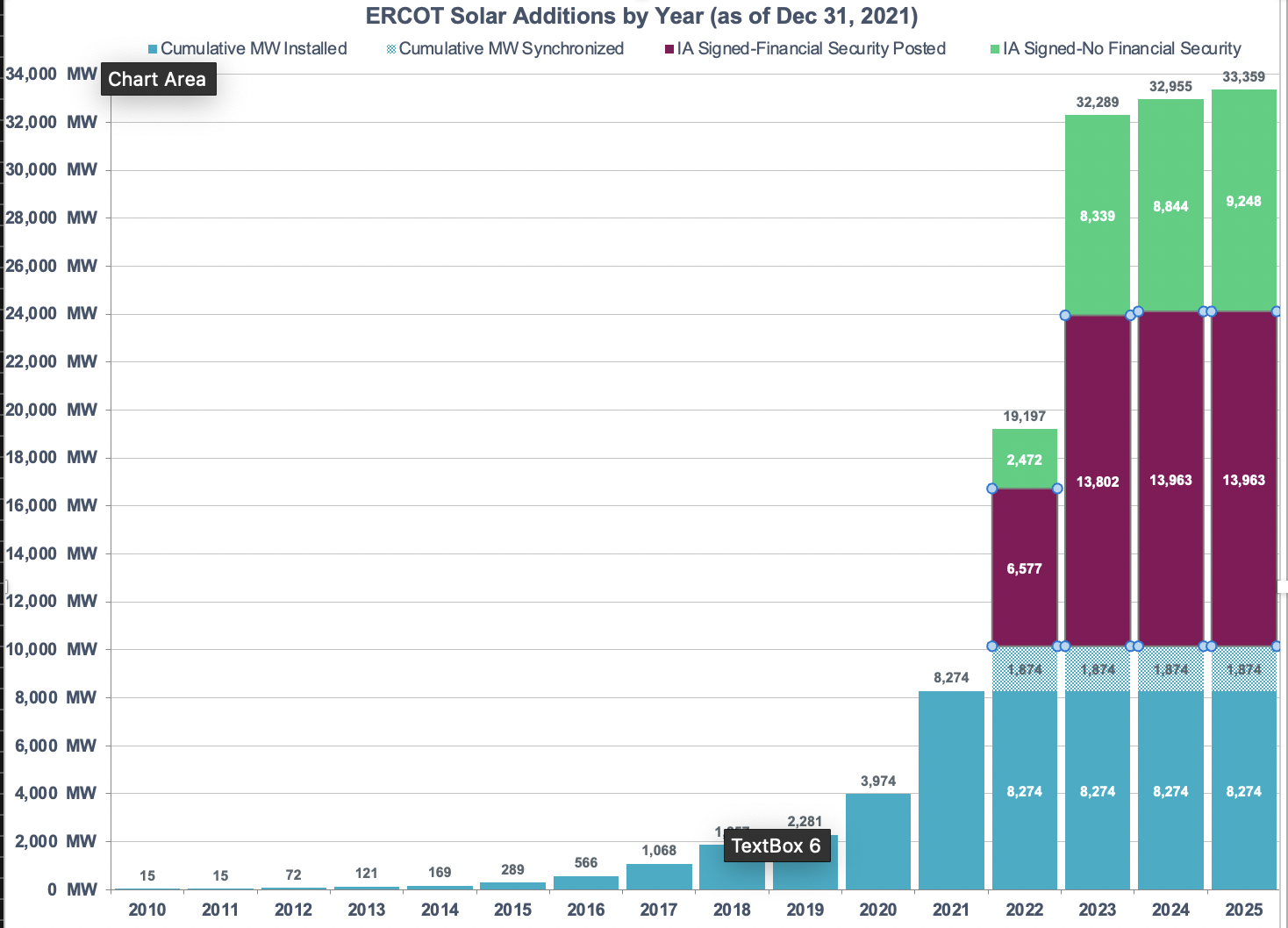 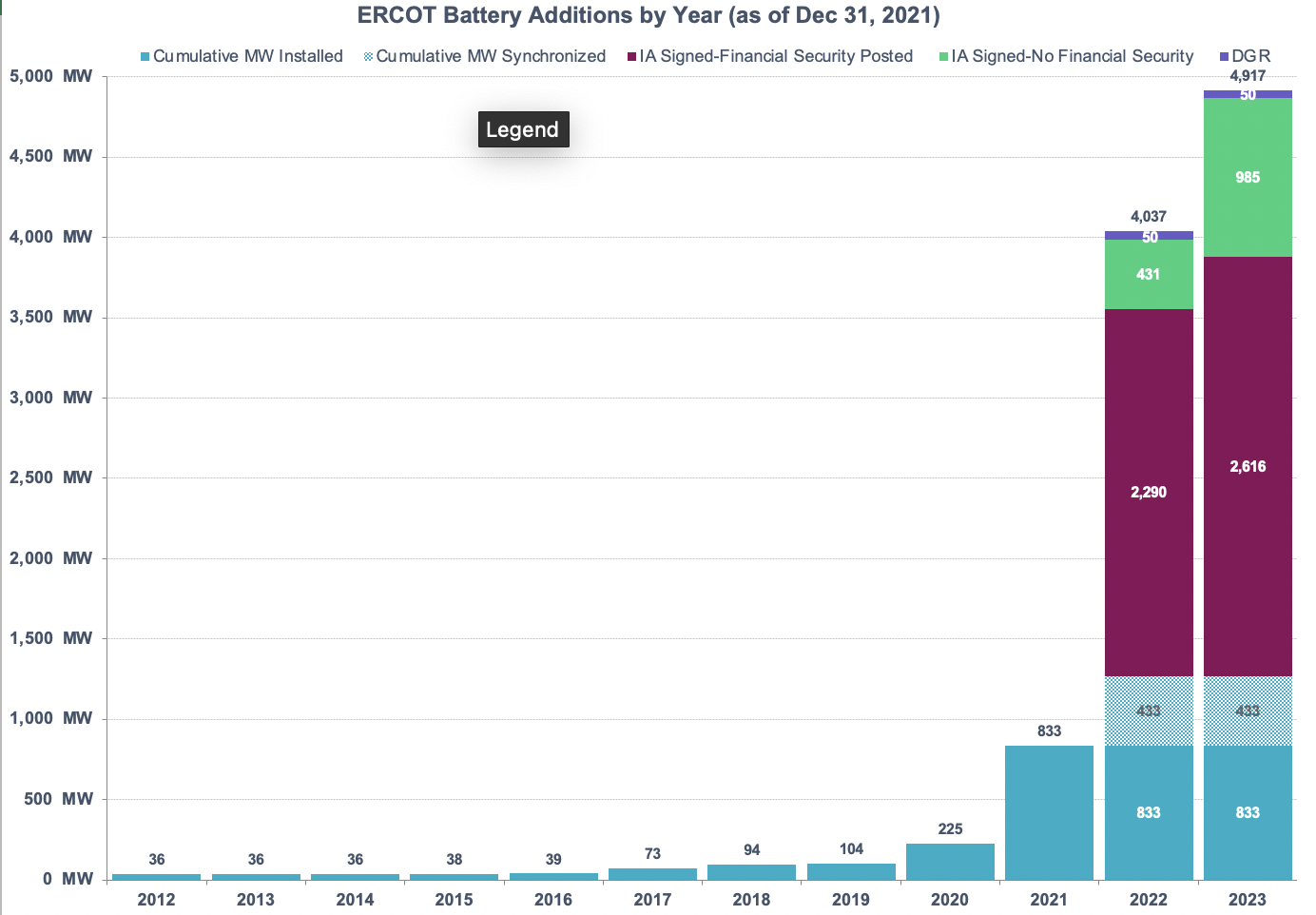