I have worked in both the Power Generation and Engineering departments at BELCO as an engineer and project manager. This experience has allowed me to gain a breadth of knowledge and understanding...

This item is part of the Special Issue - 2020-03 - Innovation in Power, click here for more

For the past few months, Energy Central has been collecting nominations for leaders in the utility industry who have been embracing and advancing the ideals of Innovation. We took the 100+ nominations received and tasked a committee of Energy Central Experts to identify those that stood as true innovators, giving us five people recognized as Champions in Innovation (more details on this process can be found here).

For her efforts in spearheading the Nolan Smith Battery Energy System (BESS) at Bermuda Electric and Light Company Limited (BELCO), Stephanie Simons was nominated by her peers to be an Innovation Champion. And in her role as a BELCO Mechanical Engineer, she surely made a difference by blazing a new trail in what energy storage could look like on a Caribbean grid.

In the Innovation Champion profile that follows, hear Stephanie share about the implementation of this energy storage project that was recognized by the Caribbean Renewable Energy Forum and inspired her peers. After you’re done being inspired, we encourage you to congratulate Stephanie and leave a comment or question for her in the comments section.

Getting Started in the Utility Sector:

"I started working at BELCO as a summer student when I was in university, studying Mechanical Engineering at Glasgow University.  This then led to full-time employment and enrollment in the company’s Monitored Professional Development Scheme.  Toward the end of their professional development program, my boss came to me to talk about a new up and coming technology that he wanted me to look into, which turned out to be the precursor to the Nolan Smith BESS.

After proving the initial concept for a Spinning Reserve and Frequency Response use case for the system the initiative lost traction after changes in the strategic vision of the company. But eventually interest in the project resurfaced and we realized the business case was still valid. At BELCO the value of our largest generating unit is held in reserve capacity. This is an expensive way to provide power, but it provides very stable and reliable power. Energy storage allows the reliability to be achieved but at a lower cost. Management realized what fuel savings we could actually gain, and most of that would be a huge benefit to our customers as well, so we looked to make the project happen.”

Building a Team for the BESS Installation

“Most of my career has been split between the Operations Department, which is the actual monitoring and control of all the systems relevant to the diesel engines, and the Engineering Department, and that's changing out auxiliary equipment that is now obsolete or working with the power generation stakeholders to make system upgrades.  Being the Project Manager, and doing all of the project development work for this project, it was different being a mechanical engineer who is used to the very power generation side of our company.  I had to step over the fence and talk about transformers, inverters, controllers and where the system will be connected to the network and what the system flow studies look like, what the potential impact to the overall grid will be. Once we got the go ahead to move into the procurement phase, I developed a  wider project team, which was made up of  people from our Grid Operations department, and they definitely gave a lot of good information for what the electrical design of the system should look like, what integration looks like, what maintenance looks like.  In the end, because energy storage is neither really power generation nor T&D, it kind of just depends on what use-case you choose.  It ended up being, we kept it as a power generation asset, so it's almost like another engine, but then not an engine. “

Getting Stakeholder Buy-in On Innovative Ideas

“It started very small, with talking with the senior executives who had asked me to start looking into the benefits of energy storage.  Quickly this research was passed on and spread and lead to presentations to the full senior management team, and then there are multiple presentations required to the Board of Directors.

With their buy-in, we then had to prove the concept to our Regulator.  One thing that eventually helped was that we were planning to put in a new power station.  The power plant project was valued at over $100 million, and our project was just under $10 million.  Normally a $10 million capital project in itself at any year would have been a really big deal.  Because it was lumped in with the new powerplant, it wasn’t as much of a risk financially.

In the end, it took me about three to four years to be able to succinctly explain what the system was actually going to do.  Since I was involved from the very beginning of some of the modeling, I was able to describe exactly what each engine is going to do, but then when you're talking to the Regulator or Board of Directors, you have to step back and really look at it from a macro level to answer what the whole project is doing. What it is doing is allowing us to continue to supply a high reliability of electricity to our customers for less money.

I don't think I realized how innovative it was until I think it was finished.  I just viewed it as how we normally provide spinning reserve to the system; then here is the energy storage system that is a block of energy that we can use, and it has a relatively short payback period. I was so deep into it that I didn't actually realize how new and how risky it was potentially.

It helps that energy storage has been used by the utility quite a lot.  It's normally in much, much smaller packages, but in the end it's still just some form of electro-chemical storage and a power conversion system.  We use components every day.  Everybody is familiar with those.  The tricky part comes with the system control, and I had to do a lot of talking with our system operators who manage the demand of the grid with the supply of the power generation available, and those were some of the key stakeholders to make comfortable with the system.”

On Becoming an Innovation Hotbed in the Caribbean

“It is surprising to me that when the system was commissioned that it was one of the largest in the Caribbean.  I believe it’s actually one of the only ones for spinning reserve, which still boggles my mind since there are so many of the smaller islands run internal combustion engines.  There are quite a few systems out there paired with renewable energy systems for system stability, but their use-case isn’t spinning reserve.

When you take a step back and realize this system is actually 10 megawatts of an approximately 100-megawatt system demand.  It’s 10% of our actual demand potentially, which is pretty exciting but also ironic that I was so in it at the time that I didn't realize that it was kind of pushing the envelope so much.”

Lessons in Energy Storage for Other Utilities

“Making sure that the message is clear on what a system is going to do is critical. I definitely found at times when the project was progressing, people outside of the company would say that the system is going to do different things than it actually was.  Crafting the message, making sure that even just internally we know what we're doing, we know why we're doing it is so important. You need to make it easy for people to understand the benefits.” 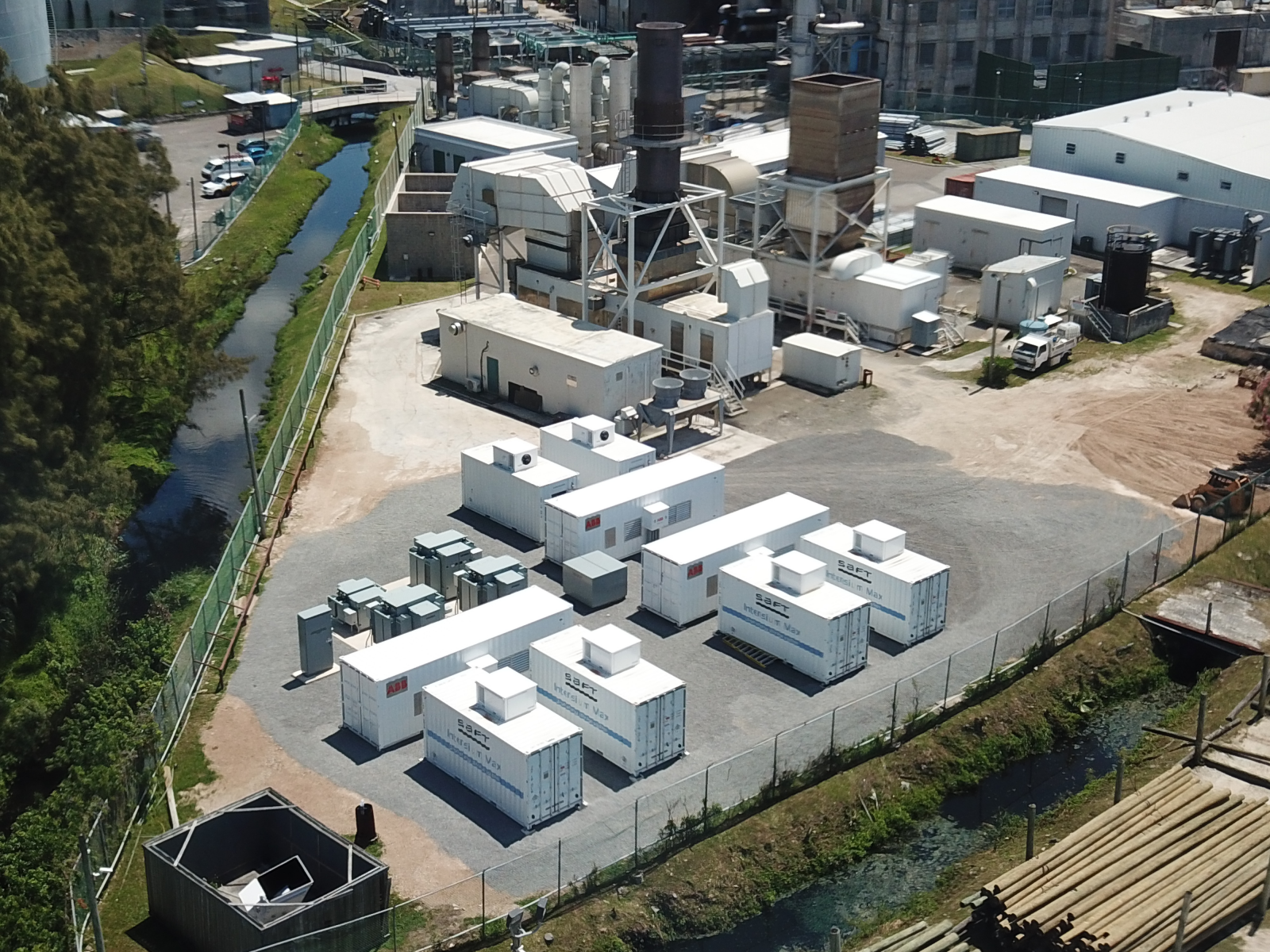 The Future of Utility Innovation

“I think there's still so much opportunity for different types of energy storage.  I had a master plan of starting with the low-hanging fruit of the spinning reserve and then going to a longer duration energy storage system, which would be for peak-shaving.  A couple of years ago, I thought that would have evolved into the flow battery technology, but the major projects developers are still using a long-duration lithium ion chemistry.

I think eventually we will see more decentralization in the C&I space.  It will be a very different model for the Utility and will come with its own risks and challenges.  I think there's a lot of push for us to act like a start-up company and provide all of these really innovative, never-been-done-before services, while also still being expected to keep the lights on at all times.  That's a really juxtaposed and difficult place to try and be. But it’s also exciting and opens up a lot of opportunity for innovation and new technologies like energy management services, aggregating demand side management system or distributed energy resources.

Energy Central thanks Stephanie Simons for her valued contributions to the utility industry and for her leadership in the area of innovation. Please leave a note of thanks, ask a question, or just your two cents in the comments below. To see the other Energy Central Innovation Champions, see the rest of the Special Issue on Innovation in the Electric Power Industry.

Congrats Stephanie! Loved how you were able to get stakeholder buy in. Thanks for sharing.

Thanks Stephanie for sharing your very interesting case study! It is inspiring that you were able to persistently move forward with your innovative ideas and to reduce the utility's fuel and generation expenses by leveraging energy storage. As distributed energy models gain traction and as utilities increase the ratio of their renewable generation sources that require complementary storage solutions, utilities will increasingly turn to batteries and fuel cells for resilient and emission-free storage solutions. In locations that experience severe weather conditions and are in need of long duration storage solutions, fuel cells can be a valuable supplement or substitute.