Someday, You May Be Able to Pay For Your Coffee With the Juice from Your EV Battery Imagine driving up to your local coffee shop, and ordering a Tall, a Grande, or whatever they call it at your favorite locale. You plug in your car to a charger and pop inside to order, relax, and take a load off. While the barista works the crazy complicated machines (huh? It’s not a nuclear reactor It’s just coffee – what are all those knobs and valves for!), you get a notification on your app. It tells you how much the coffee is going to cost you. It also tells you how many minutes it will take your electric vehicle (EV) to pay for it. You hit some settings, then click “Yes.” And immediately electricity starts traveling from your car to provide ancillary services and energy to the grid or even to the localized microgrid supporting the coffee shop. Is this George Jetson scenario too far-fetched, or might some version of it actually occur someday in the not-too-distant future? We look at the technologies and emerging business models that suggest perhaps there’s something there.

The building blocks of a “vehicle to everything” (V2X) future

In its simplest sense, an EV is just a very large battery assembly on wheels. The batteries that power our EVs today are all variants of lithium-ion technologies, and those same batteries are also deployed in stationary storage applications across the grid. The EV batteries are fairly large. The two versions of the Ford F150 Lighting pick-up truck are equipped with 98 kilowatt-hour (kWh) and 131 kWh batteries.

To put that in perspective, the average U.S. home uses about 30 kWh/day, so that vehicle could theoretically supply between three and five days’ worth of energy to a household. Until the F150 arrived, that notion had been mostly theoretical. The only EV previously equipped with vehicle-to-grid bi-directional capability was the Nissan Leaf. With the F150, though, and its notice that a car could power a house, it appears the floodgates have opened. VW, Hyundai, and numerous auto manufacturers have also indicated that they will offer vehicles that can offer power back to a facility, or even directly to the grid itself.

EVs will soon offer power to the grid 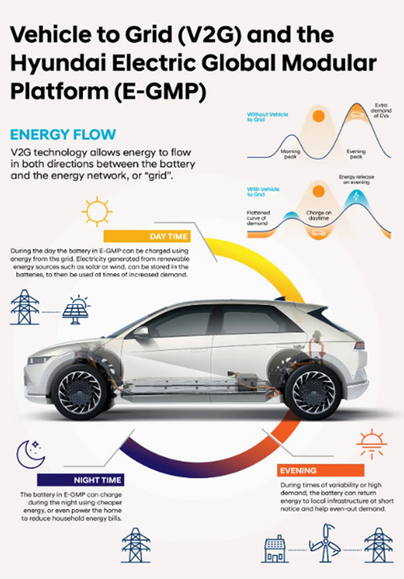 In fact, there is now a consortium of over 200 companies focused on addressing this opportunity, including manufacturers such as GM, Ford, Hyundai, GM, and Tesla. The general concept is to tap the under-utilized storage capability of the growing electric vehicle population and use that to stabilize the power grid.

The U.S. Department of Energy is also investigating this potential and announced in April 2022 the signing of a Vehicle to Everything Memorandum of Understanding. This initiative includes a number of participants including municipalities, utilities, national labs, charging infrastructure companies, and auto manufacturers. All of them are focused on creating additional value from the batteries in our EVs.

Given this level of interest, it’s natural to ask the question: “How big is this opportunity? How much energy in aggregate are we talking about, and what are the potential value creation opportunities?”

Let’s take these one at a time. First, how much energy are we talking about? Well, if all of America’s light trucks and passenger vehicles were propelled by electricity, total national electricity consumption would increase somewhere on the order of 30%, but that percentage would vary greatly by state, depending on local economies and power use. Suffice it to say, it’s enough energy to matter. 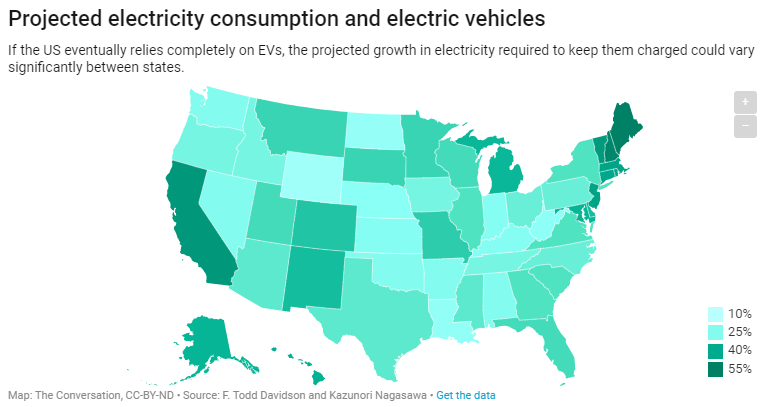 So, if your car were to sit connected to the proverbial charger at the coffee shop, what value could it provide? The most valuable services would be the short-duration grid-balancing stuff, generally referred to as ancillary services. This would have your EV injecting power into local distribution systems to help maintain desired grid frequency or voltage levels. However, it might also be advantageous for the grid to have your car pulling power from the grid at any particular moment, offering the same types of service in the other direction (sometimes there’s too much energy on the grid, at other times, too little).

Vehicles such as the Nissan Leaf have been performing this activity in Europe since 2016.

In Amsterdam, for example, 15 car chargers interact with Nissan Leafs to help power the Johan Cruyiff soccer stadium. In this country, the first school buses are being enlisted to help power the grid during summer peaks in Massachusetts, while next door in Rhode Island, a Nissan Leaf earned an extraordinary $4,200 in the summer of 2021, delivering power to a facility that helped it offset peak demand charges.

Come for the game, but leave some power behind

What about cycle life and driving range?

One of the first obvious objections raised relative to V2X is the fact that a car battery has a finite number of cycles and can only be charged and discharged so many times. Depending on the battery technologies, typical cycle lives have typically been between 1,000 and 3,000 in recent years.

However, there are a few things to know about cycle lives and V2X interactions. The first is that most revenue opportunities do not require a full cycle or even close to it. They are typically short-duration events, so they generally don’t have a meaningful limiting impact on battery life. Second, batteries are getting better, with improved lifespans. In fact, CATL, the world’s largest battery manufacturer, announced in 2020 that it was going to offer a battery that could last a million miles (a typical EV battery is warrantied for 150,000 miles). So, while interacting frequently with the power grid may be legitimate in some instances, that will likely not be the case in the future.

Then there’s the issue of what the EV is primarily meant for. Nobody looks at their EV and says “Oh, wow, I can’t wait to see that bad boy provide energy and ancillary services to the grid.” Quite the contrary, they invested in their electric vehicle to get somewhere, and they never want to run out of energy at the wrong time. But, there’s good news here as well. Better software, informed by artificial intelligence, can track your battery’s state of charge and your usage and driving patterns. In some cases, you can even program it so it knows where you want to go, optimizing within those parameters and the revenue-making opportunities.

So, could I really trade some juice for coffee someday?

For some of us, coffee is the fuel that gets us through the day. Could we really trade one fuel for another in the future? The answer is a definite maybe. First, our cars could be a big asset to any customer-facing retailer facing a monthly peak demand charge on their utility bill – the fee based on maximum use during an hourly (or even fifteen-minute) interval during a given billing period. In some places, that charge can equal 40% or more of the total bill, so there’s a huge opportunity to address those charges. Then there are the ancillary services mentioned above.

Kristi - this is a great article - thanks for sharing this with the Energy Central Community. Do you think as these changes occur the role of the utilities will change?  And if so how?