After completing a degree in finance, Jemma started her career in banking at J.P. Morgan in London.While there, she saw first hand the dilemmas and problems that came with bringing corporate...

In the middle of February of this year, in the US, the jet stream dipped particularly far south into the continent causing what would become a catastrophic winter event. The fast moving, high level air flow stretched from Washington to Texas and brought with it, a polar vortex with icy cold air across the country, spawning many snow storms in its wake.

There followed a record series of low temperatures throughout Texas, with the mercury falling to lower than that of Alaska in winter.

Texas, possibly the most independent of US states, found itself switching on its heating, often electrical, to consume a record 70MW, an electrical peak that exceeded any previous maximum  that stood at 66MW.

But just as its power demand was at an all time maximum, Texas’s ability to produce its own electricity was in deep trouble.

Natural gas, which supplies nearly half of the petrostate’s generation, had a problem. Gas which at low temperatures has a certain amount of moisture that can freeze or solidify with the hydrocarbons it comes with, created big lumps that blocked pipes. And with electrically driven pumps that began to fail, the problem only got worse. No one had really thought to winterize the supply.

So gas stopped functioning in many places, and the wholesale price of gas skyrocketed to more than 100 times its typical price, at $9,000 per megawatt hour.

At that price generation systems were competing with domestic users of gas for what was available, and that was a problem for domestic users who wanted to heat their homes in the bitter cold.

This made domestic users switch to electric to stay warm and thus further compounded the shortage of electricity. Many power plants were unable to run because there was no gas to be had, at any price.

But the problem went beyond gas.

Wind turbines shut down due to icing and seizing up.

Solar panels shut down due to snow on the panels.

The one nuclear plant in Texas shut down because the water that they needed to cool its reactors had itself shut down due to the water systems that had shut down before them.

Coal production wasn’t immune either, at just over 12% of Texas’s electricity. ERCOT, the Electric Reliability Council of Texas, who are responsible for the management of the grid, tried to prevent a catastrophic cascade of trips in the electrical system, by creating a series of semi planned blackouts.

Hospitals were successfully protected but by late March the total number of deaths surpassed 110. An 11 year-old boy called Chris Pavon died of suspected hypothermia. He was amongst the many deaths caused by the power outage, and Pavon's family sued ERCOT for gross negligence.

Damages from the blackouts were estimated at $195 billion, making it the costliest disaster in Texas’ history. The power grid was thought to be "seconds or minutes away from" complete failure when partial grid shutdowns were implemented. During the crisis, some energy firms made billions in profits, while others went bankrupt.

Consumers were left with insanely high electrical bills even though in some cases they had hardly received any electricity for days.

Fiercely independent politically in the union and to some extent an electrical loner on the continent of North America Texas was vulnerable to once in a lifetime events such as this. 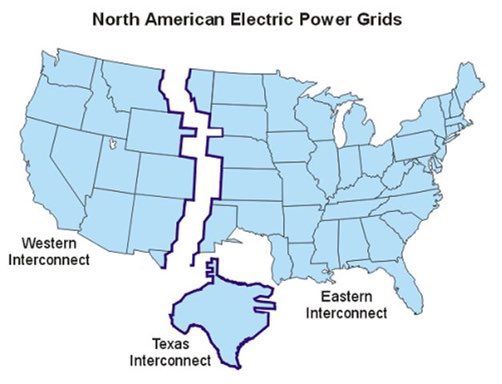 Some commentators like Michael Shellenberger In Renewable Energy Boom Risks More Blackouts Without Adequate Investment In Grid Reliability felt the problems of Texas were created by too great a reliance on renewables without the batteries, or the distributed network to manage them properly.

What is certainly true is that during the winter storm, substantial volumes of production were lost not directly to freeze-offs, but because equipment lost power, causing a negative feedback loop of dwindling gas and power supplies. It was in more ways than one, the perfect storm. At the simplest level, there had been a resistance to learning some of the lessons of the 2011 freeze up, which while 2011 was not as bad, it certainly gave some clues to the events that were to unfold nearly a decade later. There had been a lack of winterization procedures, basically making sure important systems were up to operating in the extreme cold. Such precautions would have kept the nuclear power station going.

One part of Texas though, ran to a different plan. El Paso, the western region of Texas, after 2011, built itself the fully winterized Montana Power station and invested in energy sources in Arizona and New Mexico. In El Paso, fewer than a thousand homes lost power and that was for just five minutes. They were much better prepared.

But for Texas as a whole, the crisis could also be seen as the result of Texan ideology. Low taxes, low spending, minimal oversight of public services by elected officials, and residents generally fending for themselves. There are now people of all stripes and persuasions pointing the finger at each other and trying to learn, or teach each other lessons. Which ones will prevail when in the final analysis is hard to say. Certainly avoiding this sort of crisis in the future requires first of all anticipating, and then being ready to spend against once or twice in a lifetime events.

Perhaps the lessons of El Paso should not be lost. Had the main part of Texas deployed a more integrated grid, the catastrophic breakdown would have been averted. We need resilience and resilience comes in direct proportion to the amount of decentralization in the system. If we can find a way to improve the levels of decentralization both with the outside for a state like Texas and within, we will have fewer disasters in the future, whatever the weather throws at us.

Certainly avoiding this sort of crisis in the future requires first of all anticipating, and then being ready to spend against once or twice in a lifetime events.

This seems to be the key, especially as you note in the unique Texas culture. Citizens were definitely mad (and rightfully so) at those in charge, but how mad would they have been if in the years before they saw a notable increase in their power bills to prevent disaster in severe winter storms-- how many of those would have scoffed at the idea that Texans really needed to pay for that? Seems like a bit of a lose-lose from the public perception basis, but hopefully this is a lesson that only needs to really be learned once or twice before getting buy-in that preparedness is better than cleaning up this type of a mess.