Energy professional with over 30 years experience in electricity generation and oil & gas markets. Experience with many generation sources including fossil, nuclear, renewables and biomass.... 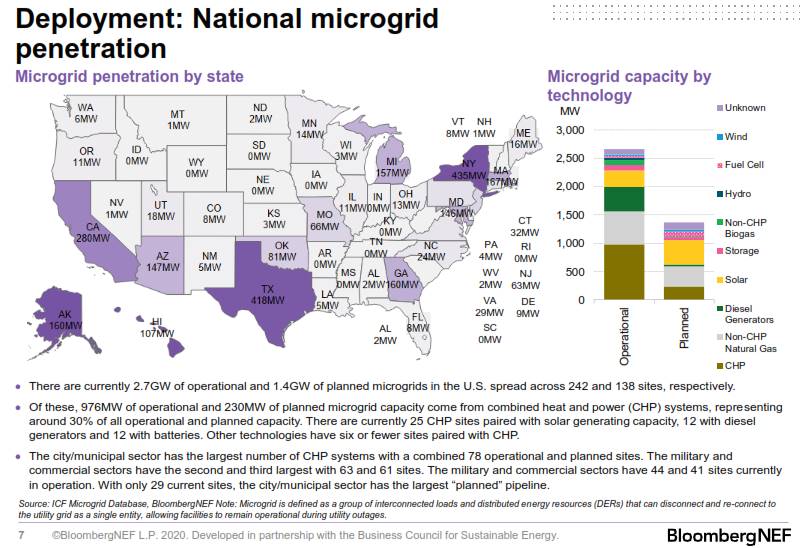 Microgrids are generally defined as geographically smaller electrical systems which can be connected to larger grids to operate interconnected but importantly can disconnect from the larger grid and operate in an isolated or “island” mode.  Historically these have included smaller based loaded fossil fueled power generators to support operations when islanded.  Historically only the larger, ultra-critical applications like hospitals, data centers and other energy intensive infrastructure have had the scale and budget to invest in Microgrids.  The recent, rapid reduction in cost and general acceptance of both energy storage (primarily Li-Ion batteries) and distributed solar PV technologies is providing reduced costs and increasing the functionality and ability to integrate renewables in Microgrids.  The graphic from Bloomberg NEF highlights this growth and shift in generation technologies for Microgrids.  The desire to further integrate on-site solar PV with operations is driving almost half of planned Microgrids.

This expected growth is tremendous, with almost 50% growth in the total installed base in the planning phases.  These projects will take several years to build out but as the economics continue to improve, the number of projects is expected to continue to expand.  As more projects are completed, we will see a greater acceptance and cost reduction from lessons learned and improved supply chains.

To establish a framework for the type of microgrid that is being referenced in this article, it has some key characteristics:

So why are Microgrids an innovation worth watching in the 2020’s?  Of course, there are many reasons, it is easiest to evaluate these benefits in three broad categories:

In today’s hyper connected world, many businesses and facilities cannot operate without their electronic systems – all powered by electricity, this demands reliable electrical power.  With many facilities, short term loss of power or even poor power quality will damage product/services for a much longer period that the power outage or disturbance.  Many businesses and facilities with critical systems powered by electricity have installed on-site generators, most of which are for emergency situations only and are not designed to operate in a grid connected mode.  With this arrangement the end users’ systems are completely de-energized prior to the emergency generator operation and any super critical system will have additional electricity back-ups such as UPS’s to allow continued operations.  When the utility returns to service the emergency generators are again shutdown, the processes de-energized and then grid power is returned.  If there are processes which do not re-start automatically or have a loss of production, each use of the emergency system causes two outage loss events.  With a Microgrid, the on-site generators’ controls/breakers are modified to operate in parallel with the utility system.  The Microgrid and the utility system are connected through one or more synchronizing electrical breakers that protect both the utility and the Microgrid.  This allows the Microgrid operator to selectively disconnect from the utility during periods of expected grid unreliability and re-connect without shutting down any internal electrical loads except those necessary to balance the generation resources of the distributed generation assets. 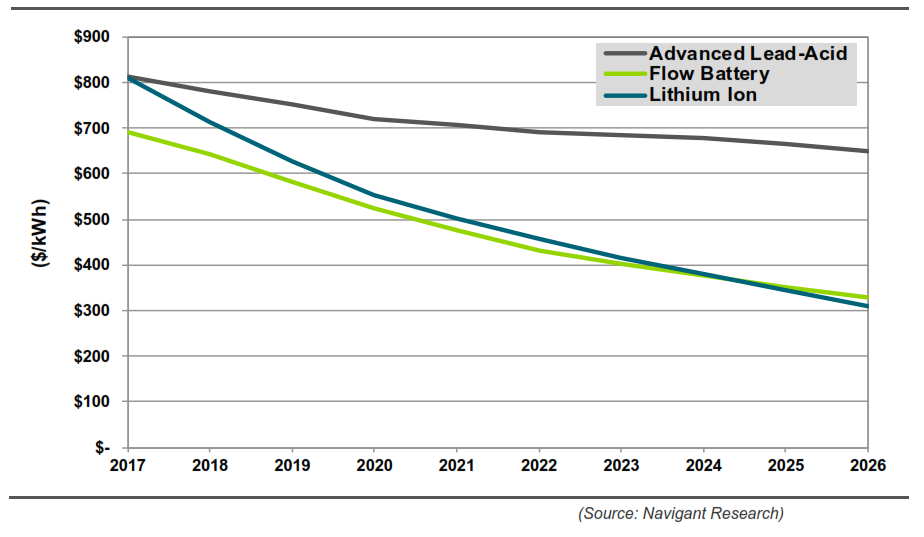 With the availability of smaller generation assets such as Solar PV, small gas turbines & reciprocating engines and hopefully many additional innovative solutions in the future, the economics of on-site generation has dramatically improved.  With a Microgrid, renewable and other distributed generation resources can generate for on-site demand, export power the utility system and/or charge electricity storage devices on the Microgrid.  A key contributor to the generation integration is the rapid reduction in the cost of energy storage, the chart (from Navigant, now Guidehouse) shows how the cost of energy storage for Commercial & Industrial (C&I) solutions is expected to continue to drop dramatically over the next decade.  Energy story provides an effective means to balance generation and demand which has not been available with traditional generation only assets.

As the first chart shows, the largest generation source in planned Microgrids is Solar PV.  This is driven by the dramatic decrease in the installed costs of solar systems, commercial systems can be installed for as little as $1,500-1,800/KW.  Facilities with the space to install panels can now be very competitive in many markets in North America.  Energy storage systems allow Microgrids to store energy from intermitant generation sources like Solar PV and then meet on-site demands consistently for short periods of time prior to starting other generation sources.

Beyond Solar PV, the economics of distributed generation have improved due to an increase in the number of smaller generators and integrated heat recovery systems available in modules which require little on-site engineering.  Also, the availability and very low cost of natural gas provides a competitive alternative for on-site generation, even conversion of existing emergency generators to provide a longer duration back-up to renewable generation and energy storage.  A key advantage to an on-site gas-fired generator is the ability to capture exhaust heat to produce thermal energy for heating, hot water and other non-electrical loads.  Combined heat and power (CHP) has traditionally required larger applications but there are suppliers offered integrated power and heating solutions at the single KW level, if your application has a heat load, there is potentially a solution available. 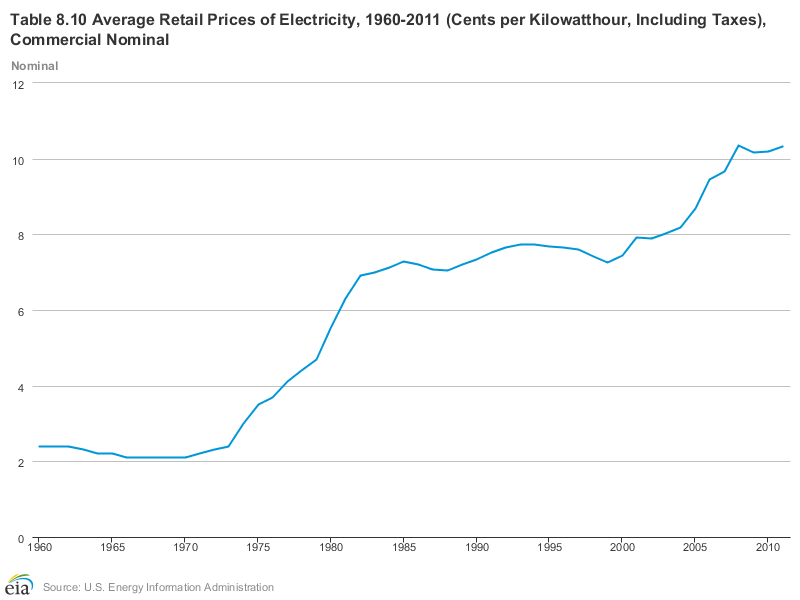 Throughout this article the reduction in equipment costs have been mentioned, which would lead us to expect that utility power rates are also decreasing.  As the EIA data for commercial electricity shows, electricity prices continue to rise due in large part to the large investments in T&D systems.  Of course, each region is different, but the trend is consistent – upward.  The key advantage to distributed generation is the lack of transmission and distribution (T&D) costs which are associated with traditional electrical generation.  In many markets with low cost natural gas or renewable generation sources, the cost of T&D can exceed the cost of generation on a delivered KWH basis.  With distributed generation end users have the potential to reduce their total cost of electricity while gaining the other benefits of a Microgrid.  In support of the existing utility grids, Microgrids can provide excess generation to the grid and reduce demand when the utility grid is limited in capacity.  Each electrical market will have different rules to allow the operation of Microgrids, but many areas have implemented lower cost and quicker permitting for smaller generation interconnections – a critical step in encouraging Microgrid rollouts.  In California and Hawaii, there are cases in front of the Public Utility Commissions evaluating the establishment of specific Microgrid tariffs to set the costs to interconnect, prices for grid power to the Microgrid and establish a buyback rate from the Microgrid.

With the demand for cleaner, more effective & efficient generation, Microgrids provide a solution to allow more on-site generation of electricity and end user engagement in their energy usage and spending.  Many utilities are changing their view of what has previously been a competitive solution.  Hopefully Microgrids can be a tool for a more diverse, integrated and reliability electrical system.

However, I am wondering since the cost combine with PV+BESS, even with backup of Diesel gen, the overall cost is not cheap for initial investment. So what is the incentive to persuade investor to build such isolated grid system at such area which already fimilar with inerconnected grid enviornment like USA.

Allen - thank you for the comment.  You are correct, even with the cost reductions for energy storage, any addition of storage increases capital costs without adding any incremental energy.  There are some customer benefits:

1.  Improved redundancy and reliability - many locations have routine power outages and quality issues that can impact high value production.  BESS can potentially eliminate all of these depending on actual electricity uses on-site.

2. Utility tariff structures and even market capacity charges can be a significant % of purchased energy costs.  Using the energy storage device to reduce the facilities peak demands can significantly reduce costs - thus reducing the costs of the purchased power for the facility.   Using market pricing factors or fixed peak demand periods - the microgrid can discharge the BESS to reduce the demand from the utility system.

3.  The desire to implement renewable energy, if a site has adequate space, Solar PV can be very competitive, inexpensive to finance, and government supported but as we know inconsistent in generation - so the energy storage can levelize the renewable generation.  Also many organizations are focused on sustainability and purchased electricity is a large contribution to their carbon footprint.