- Normally, the power system balances at steady state with the following operating conditions:

(2) Inequality constraints representing the allowable range of acceptable operation of the buses frequency and voltage:

- The normal operation of power system may witnesses continuous small and / or large variations, that affect the values of frequency and voltages among its buses. Hitting the limits as mentioned in the above inequalities necessitate proper actions to maintain them again. These could be centralized or decentralized actions. Long lasting power system analysis proved that frequency variation is related to active power P variation, while the voltage variation is related to reactive power Q variation.

The frequency control is performed in the following procedures:

When the available power generation is insufficient to meet the system demand, the system frequency will drop. When that drop hits the lowest predetermined value(f0-Δf), the load shedding is activated according to the above mentioned priorities. 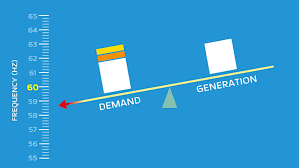 Normally, the load shedding is activated in several stages. In each stage, a predefined amount of the load is disconnected and the shedding of the load is continued till the normal frequency (i.e. the power balance) is restore. The figures below show that using small load shedding blocks can be an effective way to the prevention of over-shedding. 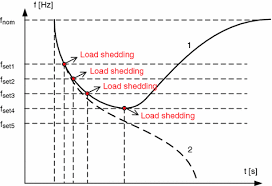 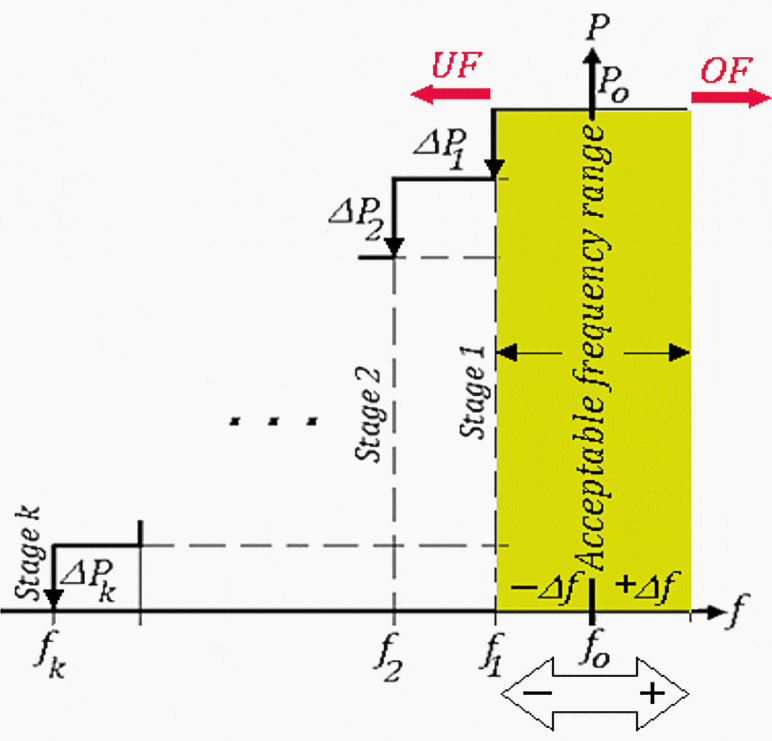 The voltage control is performed in the following procedures:

Sometimes for appropriate power flow and load requirements, the active power equality has been met while the reactive power equality has not been met. This will lead the voltage at specific locations in the network is lower than the minimum predetermined value (V0-Δ V). Centralized power system voltage control is performed according to the mentioned above procedures.

In case of the resultant will not sufficient to bring the voltage buses to the value (V0-Δ V), decentralized reactive load shedding has to be activated, to maintain the reactive power equality again. Usually distribution feeders equipped with definite time relays, that triggered to open when its voltage is lower than (V0-Δ V) for few seconds. A typical phases chosen aimed at decentralized relay are:

1. Once monitored bus voltages drop to 90% or lesser of standard, trip 5% of the load for a minimum of 3.5 seconds.

It is worth to mention that certain critical customers cannot be dropped from load despite the help it may present to the system. Critical customers include hospitals or customers that would lose lots of revenue from being dropped. 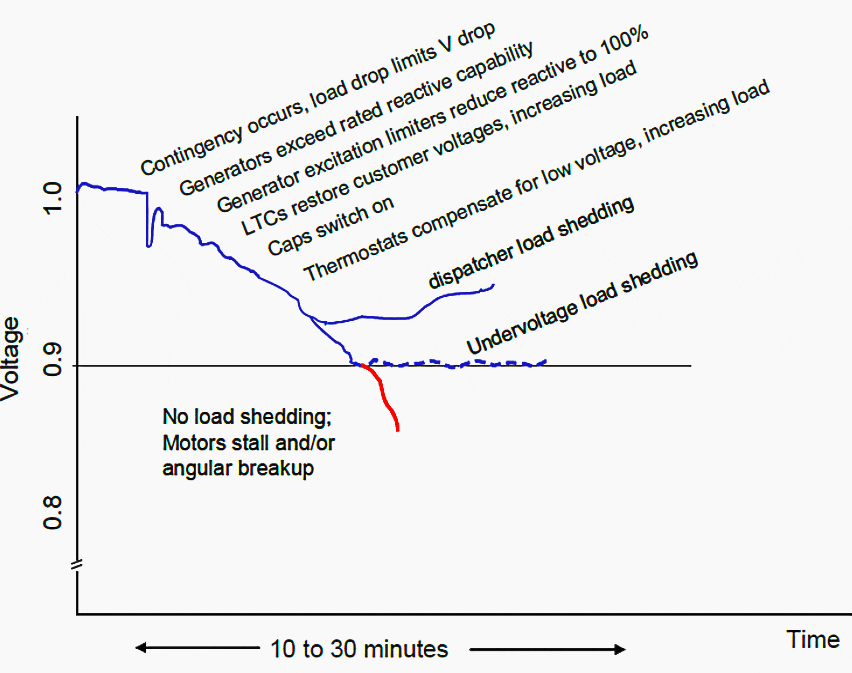 The under frequency load shedding and the under voltage load shedding schemes, can be considered as special protection or wide area protection systems that attempt to minimize the impact of continuous variation of loading conditions and prevent blackout in power systems. Both types of load shedding should have shedding algorithms defining the methods by which several loads will be switched-off (and switched-on again) automatically to keep the power consumption below a defined security level.