Integrating an Internal Price of Carbon into the Corporate Planning Process In a recent post, we addressed how various formal carbon markets function. In addition to those formal markets, other approaches to carbon pricing are emerging at the individual corporate level. As part of their efforts to manage carbon emissions, a growing number of companies are integrating an internal price of carbon into their planning activities, affecting investment decisions. What does that actually mean, how are these companies proceeding, and why is this approach gaining more adherents?

The cost of carbon

As global temperatures increase (historic heat waves have already swept through parts of Europe and the United States even before summer has officially begun), economic damage mounts across the planet. This has a direct impact on both human populations and on the corporate world. In many instances, the operations of industries - from agriculture to airlines – are directly affected. Many companies see growing climate-related impacts affecting their supply chains. Other entities simply face a growing pressure to reduce carbon emissions associated with activities because their customers and employees are demanding action.

As we noted in a previous post https://www.linkedin.com/pulse/carbon-markets-potential-impacts-your-enterprise-joyce-bone, the market-derived prices of carbon can vary considerably, depending on the timing and location of various carbon auctions. While the actual value of avoiding a ton of carbon is still up for debate, depending largely on timeframes, assumptions, and economic models used, one thing is clear: the price of carbon is not zero, or anywhere close to it. And that price may well increase over time as projected economic damages mount, and the risks for many companies increase.

Who’s using a carbon price, and why

Many companies see the writing on the wall and are preparing accordingly by assessing their exposure to the carbon/climate dynamic. And a considerable (and growing) number of corporations are beginning to consider their carbon impacts in the decisions they make. A 2021 report on the topic of corporate internal carbon pricing by the Carbon Disclosure Project (CDP) indicated that of 5,900 global companies surveyed, over 2,000 of them are communicating, or plan to disclose, internal carbon pricing to the CDP. To put that into context, these companies had a combined market value of $27 trillion at the time of the survey, up nearly four-fold from the previous 2017 report.

More companies are assigning an internal price to carbon

Consulting firm McKinsey reviewed the CDP data and observed that the companies utilizing an internal pricing tool were concentrated in a number of specific sectors, such as energy, materials, and financial services. 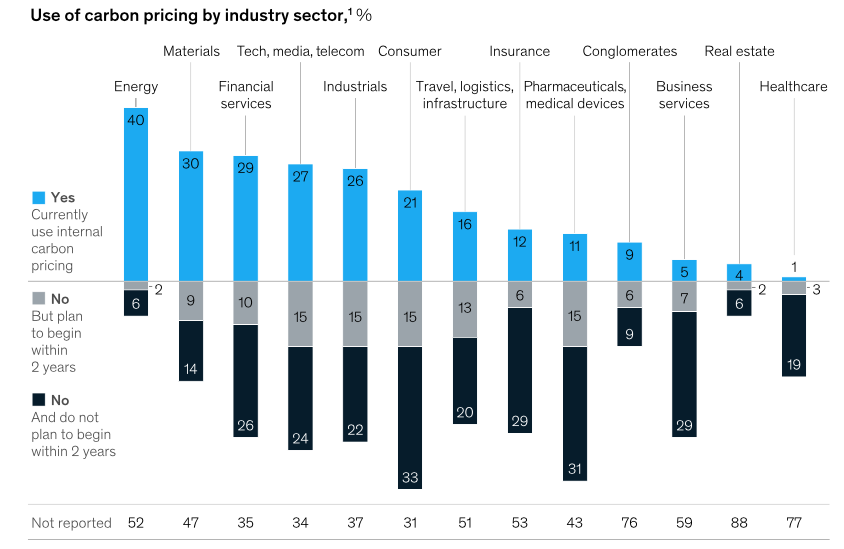 So why would these companies do that? Well, the most commonly offered reasons included a desire to accelerate low-carbon investments, ramp up efficiency initiatives, alter internal corporate behavior, manage the company’s path through a thicket of related regulations, and stress-test various investment strategies to determine vulnerability to potential future government carbon pricing actions. Companies anticipating government policies were much more likely to apply an internal price, as a means of preparing themselves for that possible future.

Why integrate pricing into planning activities? 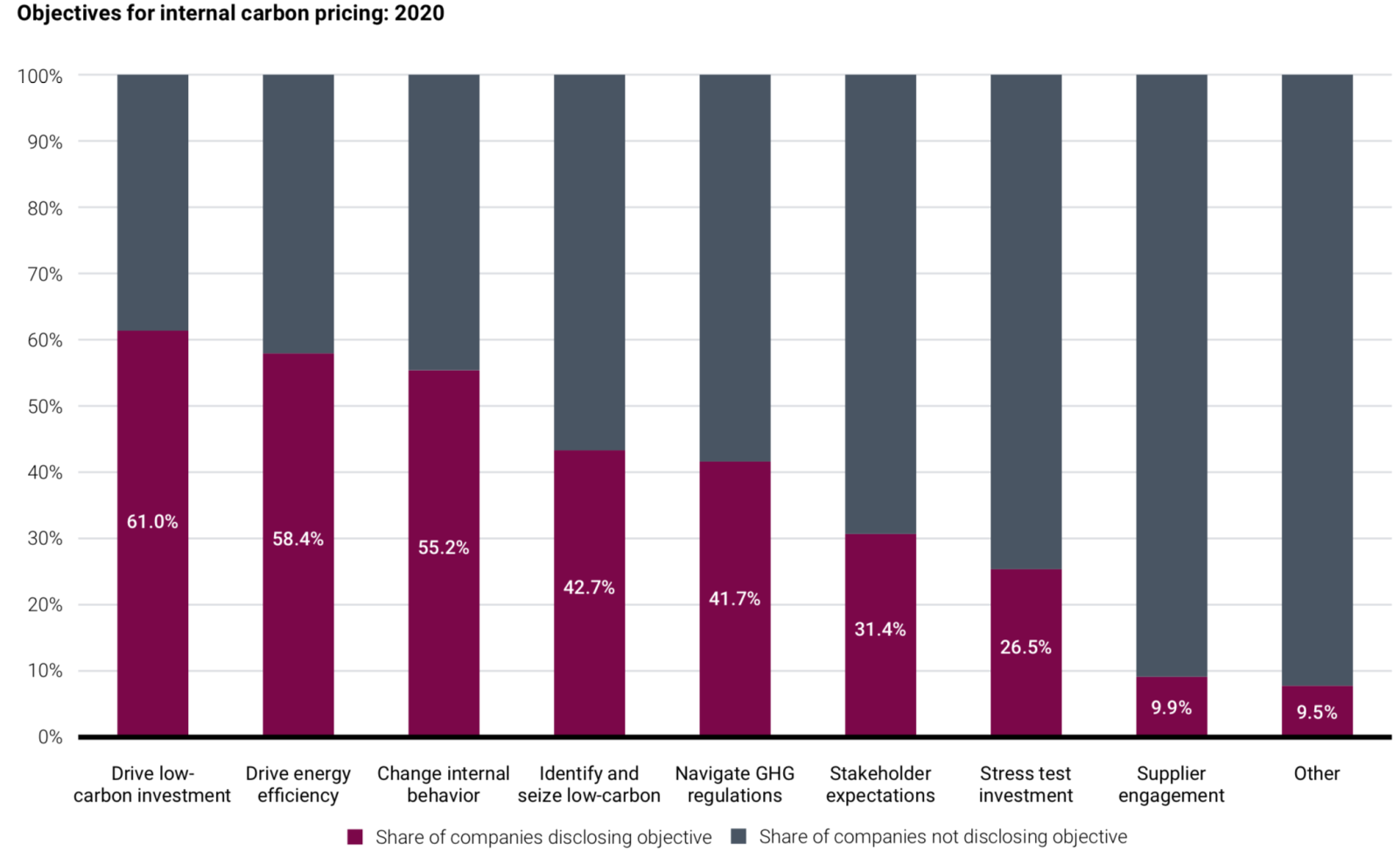 Approaches to the application of internal carbon prices

A majority of companies indicated that carbon prices applied just to their Scope 1 (direct) emissions. Scope 2 (electricity and steam) and Scope 3 (supply chain and downstream product use by customers) were more difficult to apply and more complicated.

There are numerous approaches to integrating carbon prices into the planning process. Over half of the companies surveyed indicated they used a “shadow price” of carbon, which involves determining a price for carbon and including that in their investment considerations. Essentially, that cost is reflected as a line item in the decision-making spreadsheet that orients the company away from carbon-intensive investments and activities.

Roughly 19% of companies included an implicit price, based on the actual costs incurred from specific carbon reduction projects. Another 15% brought an internal fee structure into play, physically collecting a fee from the corporate division responsible, and then either dedicating the revenues to a low-carbon fund or redistributing the money within the corporation. Finally, a smaller number of companies bought carbon offsets, while a few engaged in internal carbon trading between groups. 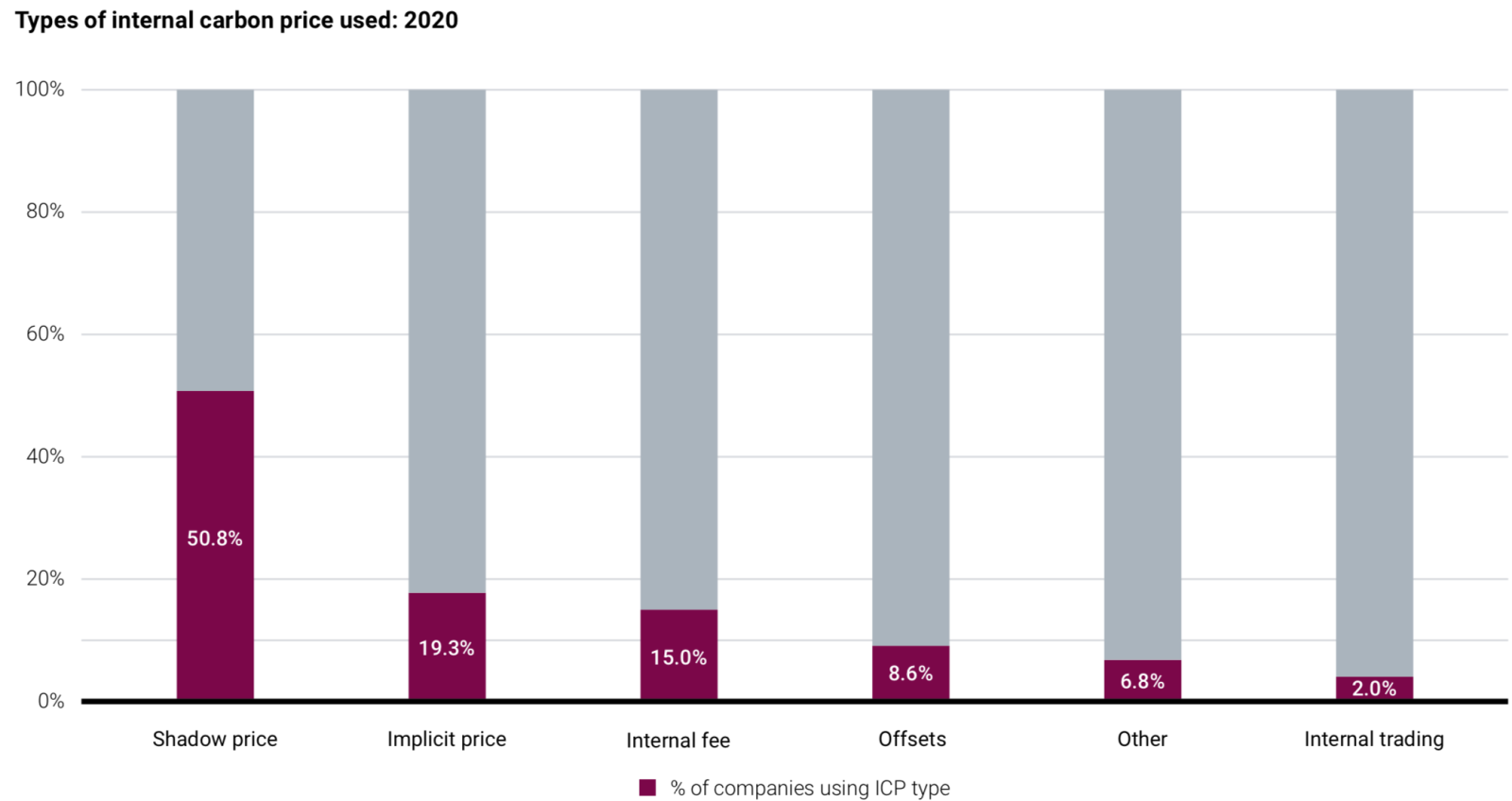 How much for that ton of carbon?

The CDP survey estimated a median carbon price of $25 per metric ton, but prices varied quite considerably. The highest were related to retroactively developed and project-specific implicit prices, often well north of $200 per ton and soaring as high as over $900/ton. What’s the right level? Nobody can say for sure, but the High-Level Commission on Carbon Prices estimated that the price should be set somewhere between $40 and $80 per metric ton in 2020, increasing to as much as $50 to $100 by 2030 in order to keep emissions in line with the goals enshrined in the Paris Agreement.

Does this really drive change?

The anecdotal evidence suggests that the utilization of internal carbon prices does change the behavior of some companies (of course, that depends in large part on the carbon price used). Consulting firm McKinsey cited an energy company in Europe that closed several power plants on the continent, with carbon pricing a “key factor,” as well as some U.S. financial services companies utilizing internal carbon pricing to identify potential high-return investment candidates.

Your organization may not be there yet, but it may be an approach your leadership team should start thinking about.

Yours in a net-zero future,