Green Energy Use Shoots Up During Lockdown Power companies around the world have used more renewables on the grid than ever before. Current events suggest that the transition away from polluting fossil fuels is accelerating. This contrasts with the traditional stance that the intermittency of wind, solar and other green power sources limits the amount that can be reliably fed into the grid.

However, over the last three months, more renewable energy inputs have supplanted coal and gas, and grid operators have proved that they are able to cope with larger amounts of power from fluctuating sources.

"This has been a real test of how resilient the grids are, and we know they coped because the lights stayed on," says Rory McCarthy, energy storage senior analyst at global consultancy experts Wood Mackenzie. "Maybe this will give confidence to governments and policy makers who were apprehensive, that they can be more ambitious about the number of renewables on the grid."

Some countries have had a reduction in usage of up to 20 per cent. Many grid operators moved to the cheapest energy supplies to meet the falling demand. Wind and solar power costs very little to generate once the installations are built and is often facilitated by government mandates and subsidies. Therefore more expensive fossil fuel sources were often the first be cut back.

Some would argue that this is not a proper “test”: we are in the middle of summer, in a very unusual situation. The critical time for the grid would be the demand point at around 5 pm on a midwinter evening, which is when offices, shops and homes are all requiring power, the sun has gone down and conventional fuel sources are needed to ensure grid stability.

Finnish energy technology group Wartsila collated data from across Europe. Operators generated an average 44 per cent of power across the EU and Britain from April to June. The same period last year was 37.2 per cent. Some countries hit daily peaks of 53 per cent, with Austria topping out at 93 per cent, due to its extensive hydropower. The EU has set ambitious goals to obtain 32 per cent of its energy needs, including transport, from renewable sources by 2030. 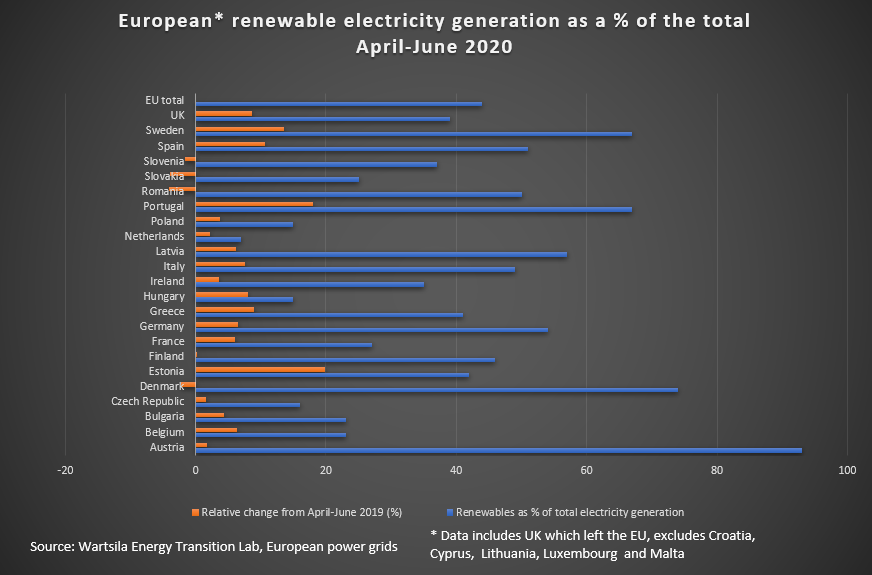 The UK's National Grid has an even harder target of operating a completely carbon-free electricity system by 2025, which it says would be the world’s first. On July 14th the British government announced it was easing regulations and planning rules to encourage large-scale battery projects.

As has been noted in numerous EnergyCentral articles, storage is the critical issue. California is looking to quadruple its battery storage capacity to over 900 MW, to extend the ability to utilize renewables in its grid. Demand Side Response (DSR) is also important to moderate or increase demand from mainly larger industrial customers, when the grid is low on capacity, or alternatively needs to use excess power on hand.

While it is to be expected that when current circumstances return to more of a normal equilibrium, the demand for fossil fuels will increase – they will be needed for both transportation and powering the grid, as well as their other uses such as industry feed-stocks and plastic production. Fossil fuels will be needed for electricity generation for quite a while yet, even if cleaner energy is highly desired by many sectors within society. The energy transition is not going to be easy, even if recent events showed that we could use a lot more renewable power within existing grid systems without having blackouts or power fluctuations.