As an associate director at Navigant, Scott Robinson provides modeling expertise to the Energy practice at the intersection of geography, consumer decision making, and time-series analysis. Scott...

GIS plays a crucial role in forecasting the impacts that the electrification of transportation will have on the grid. Data-derived vehicle registration forecasts already tell us how much and when electric vehicle (EV) adoption will occur, but by merging this data with the “where” of network optimization in GIS, we can better plan for and even hasten the process of electrification in the transportation sector.

The future locations of charging stations will play a larger and larger role in distribution planning as the adoption of EVs increases. At the same time, the capacity of the grid to meet energy demands as EV technologies advance will be a limiting factor in the rate and efficiency of EV assimilation in communities across the country.

How Much and When
Automakers continue to rollout new EVs in response to demand-side pressure as well as regulatory incentives and penalties. These new models cause the market to expand, and each additional adopted vehicle causes exponential growth in subsequent vehicle adoption geographic hotspots (due to word-of-mouth effects between consumers). Because of these dynamics, customer adoption of EVs is expected to increase rapidly over the next 10-20 years, despite slow turnover of vehicle stock, according to Navigant Research. This macroeconomic trend is a major factor in the general shift toward electrification, which some have suggested will lead to the end of fossil fuel dominance on the global energy stage.

The impact of EVs on the grid in the short term is less about the total number of vehicles on the road, and more about where those vehicles are on the road. These local geographic factors can be difficult to estimate. Broadly, it is understood that load growth from EVs, at low penetration levels and in the absence of incentives, tends to occur primarily at the customer’s home and in the evenings. This is due to both the convenience of home charging and the lack of workplace and public infrastructure in the short term. While this load growth is important due to its potential coincidence with system peak, it is relatively easy to identify and forecast this growth because it occurs on the customer premise associated with the vehicle purchase, and thus can be identified in department of motor vehicles data, and managed via rate design. The impacts and penetration of non-home charging present more substantial challenges – and opportunities – with regards to locational impacts on the grid.

Although roughly 80% of EV charging currently happens in the home, according to the US Department of Energy, public charging stations (particularly with DC fast/Level 3 chargers) are of greater interest to utilities for a variety of reasons. Public stations tend to have higher demand values due to the impracticality of long wait times in public places. The availability of public stations to supplement charging is important to increasing market penetration through opening new market segments and reducing the perceived risk of stranding. Higher penetrations of EVs could increase both utilization and density of public charging stations. Unlike home charging, public charging tends to be flat or daytime peaking, which is typically non-coincident with system peak and would thus improve grid efficiency. However, growing dependence on public charging stations will also present challenges when highly utilized, and dense public stations along popular travel corridors will generate load away from traditional load-growth areas, potentially straining local distribution assets. Therefore, incorporating public charging infrastructure in GIS with EV forecasting models will be an invaluable tool for grid infrastructure planning. However, identifying the most likely future locations of public charging requires advanced optimization techniques in GIS.

Understanding (and influencing) where public charging stations will be built is critical to planning for future vehicle electrification scenarios. Locations of charging stations can change driver behavior, and a sub-optimal geographic configuration can lead to higher market barriers and lower vehicle adoption. For utilities, this means lost revenue, higher evening peak loads, and slower electrification.

One of the biggest challenges in charger siting analysis is that it cannot be approached through a typical GIS suitability analysis. Simply rasterizing, overlaying, weighting, and multiplying layers like traffic and EV penetration would result in sub-optimal locations because travel along roads utilizes the network attributes of the road (directionality, distance, nodes/intersections, speed limits, size). Stations are essentially competing for EV traffic, with the best locations drawing customers in and away from potential competitor locations.

A more accurate modeling approach is to use the network properties of the roads explicitly, such that vehicle origins (registered ZIP codes or census tracts) are linked to destinations through traffic data. Existing stations are loaded into the network, and all points along the road are used as candidate locations for stations. Vehicle miles traveled (VMT) can be accumulated at these candidate locations, and the optimal location is chosen based on the distance or drive time (impedance, in GIS terminology), leaving the remaining VMT to be allocated elsewhere. This is demonstrated in Figure 1.

How
Is the Real World Optimal?

One issue with relying on modeled optimal locations to pick the sites of future load growth by EVs is that the real world may be completely disconnected from the best solution. In other words, the best solution may not be the one that most closely resembles future as-built conditions. There are a number of reasons why this might occur, and a few things GIS can help with: 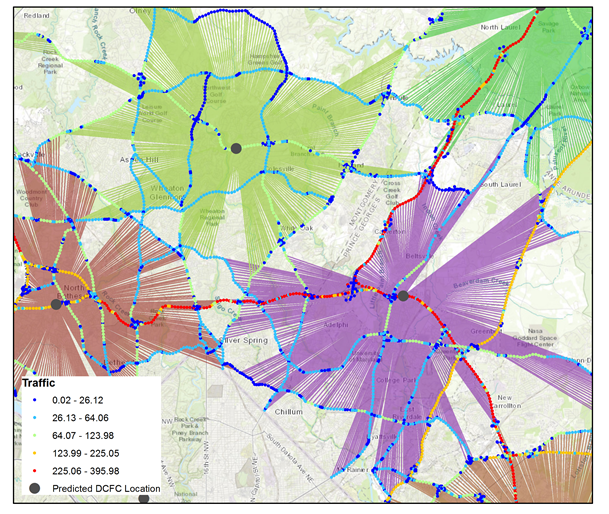 The Expanding Role of GIS

We should seek to better integrate GIS into technology adoption forecasting, distribution planning, and integrated resource planning efforts because these forecasts have strong spatial components that will be increasingly important as behind-the-meter technologies like EVs play an ever-larger role in utility decision-making. Preparing for this reality means keeping GIS data, such as parcel data linked to distribution assets, up-to-date and ensuing that all forecasts represent the geographic integrity and heterogeneity of the territory.

This is quite an interesting use of GIS that I haven't heard too much about previously. You touch on it, but it seems like an interesting problem because the 'optimal' locations for charger stations for consumers and for the grid won't necessarily be the ones utilized because the people installing EV chargers may largely be working out of self-interest to make money on the opportunities. So there are surely places where it's critical that somebody build a charger, but is there an issue where too many people building sub-optimally will harm those who are building optimally because the revenue will be too spread out to make them viable? Is there something that should be done when it comes to permitting/legislating/subsizing EV chargers to ensure the competition doesn't become in some way self-defeating?

I think we need to be mindful of long-term incentive for building charging infrastructure -- making money.  Whether it is making a profit from selling the EV, or selling the charging infrastructure, or selling the energy to charge the vehicle, or selling the carbon offset from the reduced emissions, or getting customers to charge in front of business so that will spend money there, profitability has to be considered.  With that in mind, moving quickly to the top of the list of optimal locations will be places where people work and shop.  Among those choices then come the challenges of minimizing the installation cost and maximizing utilization.  I don't think it will be long before we see ubiquitous fast charging at convenience/gas/fastfood sites, big-box stores!  We'll need that layer in GIS!

Why Esri's Utility Network Model is Better for ADMS

Transparency: The energy transition in my front-yard

Trends in Geospatial - Will GIS Survive?