Extreme weather is the culprit in the Texas power crisis, but that's not our worst problem

Shame on all of us if we fail to recognize that, whether it's Texas and the winter weather, or another place and another time, we need to invest resources in grid resilience, because there are threats to our power supply that are far more common and sinister in their origin.

Extreme weather is the culprit in the Texas power crisis, but that's not our worst problem

The greater threat we face is the daily bombardment of cyberattacks on our nation’s critical infrastructure — most notably on the electric sector.

Great point, Steve-- the fallout in Texas shows the danger of a grid that goes down, and regardless of the cause of it going down is if we're not prepared then this can happen all over again.

"Finger-pointing at this point is misguided and counterproductive. Renewables only supply about 20% of Texas’ electricity and are unrelated to the state’s other traditional power generators that are shut down or malfunctioning. The fact is that electricity system operators in Texas did not adequately plan for a highly unlikely event."

No Steve, the fact is that Texas has invested in technologies which, by their very nature, are vulnerable to cold, to heat, to tornadoes, to sabotage, to lightning strikes, to just about any threat nature or malfeasance has to offer.

Another fact: renewables are not "unrelated the state's other traditional power generators". Without the coal plants that wind power supposedly replaced, ERCOT had not enough power to maintain voltage stability.

And gas plants? They didn't shut down because they can't operate in cold weather. They shut down because all plants, peakers and baseload gas turbines, were forced to run at 100% capacity, and pipelines couldn't deliver fuel fast enough. They ran out of gas. The grid went down.

Rather than admit renewables are extremely unwieldy, unreliable sources of energy, advocates shut eyes, stick fingers in ears, deflect blame elsewhere. But in 2021, enough is enough - no more time to waste.

" we need to invest resources in grid resilience, because there are threats to our power supply that are far more common and sinister in their origin."

This is a very good constructive conclusion . May I add the need to new ways of thinking to de-link the sophisticated interconnected power systems into some of ready to be semi isolated subsystems for al long periods of time, to avoid the wide spreading  of the disasters.

Thank  you for posting this.  Also, I have been thinking there may be some lessons from the Florida Commission's efforts on hardening the grid after some bad hurricanes.  I may try to develop a case study on it.  However, it did not address cybersecurity at that time.

That would be quite interesting, Cindy. Each region has its own type of events and challenges to deal with, but no doubt there are lessons to be learned and important ways we can all put our heads together. I hope you share such a case study with us in the Energy Central Community if / when you get to it!

Jim commented on ...
How We Use Energy in 2022
If the US and other countries would just stop subsidizing fossil fuels the change would happen much faster.

Matt commented on ...
The KJ Show Episode 12: Energy Policies and Paradoxes
It's always important to try to identify the unintended consequences, but as technology moves forward and we go more into the wild west it can be... 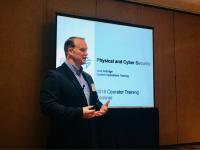 Joshua commented on ...
How We Use Energy in 2022
"While the last decade has consisted of back-to-back record years for renewables, fossil fuel use has remained flat for the last three years."

Matt commented on ...
Technology never ceases to amaze!
I wonder if there's anything to the potential to scale up and work on a more macro scale-- harnessing energy of evaporation on a large body of water?