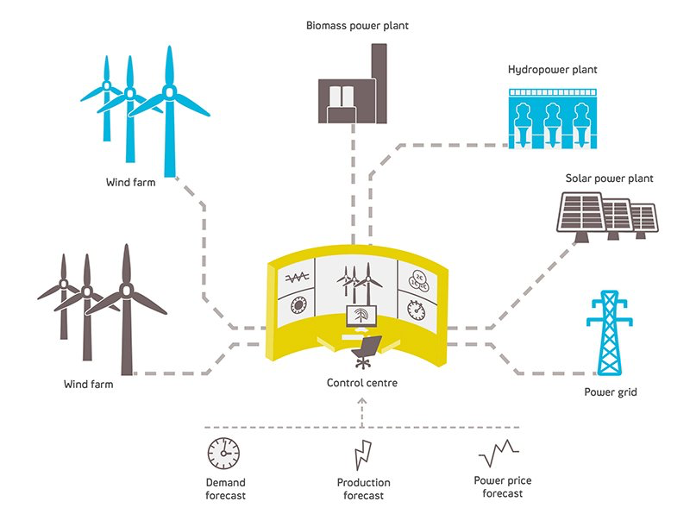 The traditional concept of a “power plant” is getting a makeover as the world pushes to decarbonize and increasingly integrate new resources and technologies in its energy grid.

Since the dawn of electricity in the early 20th century, our energy supply has been heavily centralized; power was generated in a single facility, such as a coal-fired plant, and then transmitted over a network of wires and poles to homes and businesses.

VPPs and DERs are providing clean energy at reduced costs, providing greater consumer access to renewable power. As heating and cooling are becoming more and more electrified, and climate change produces extreme temperatures and weather events, precise forecasting of local production and consumption of energy is becoming increasingly important for its dependability and flexibility. In addition to strengthening grid resilience and reliability, consumers are empowered.

“The DER is primarily being driven by individual commercial, industrial, and residential customers rather than the utilities, regulators or policymakers,” said Gene Wolf, a fellow of the Institute of Electrical and Electronics Engineers.

In other words, individuals have more control, and customers are even able to sell electrical output back to the grid.

“A large variety of resources can be incorporated into a virtual power plant (VPP). The interconnected units can then be dispatched using special software and traded intelligently on the energy market,” explained Sleman Saliba, a global product manager with ABB Energy Industries. “The goal of a VPP operator is to run the pool of units optimally and generate maximum revenues for its participants by bidding smartly on the energy trading market.”

As the availability and affordability of solar panels, storage systems, and other flexible resources increases, so too does the potential of VPPs and DERs. In fact, DERMS technology global revenue is predicted to increase between now and 2029 from $800 million (currently) to almost $6 billion, and Wood Mackenzie predicts DER capacity reaching 387 GW by 2025. Another report, from Navigant, foresees capacity reaching over 500 GW by 2028. Even in the midst of the debate over whether the control of DERMs will fall to utilities or third-party aggregators, more of those utilities are investing in VPP and DER technology and starting to pursue the VPP model.

It seems that VPPs will disrupt energy marketplaces in ways that not only benefit consumers and their wallets, but also help policymakers meet the challenges of climate chan Dr. Amal commented on ...
The Value of Diversifying Uncertain Renewable Generation through the Transmission System

Thanks for giving a link to the case study's report.

Matt commented on ...
Fads and Fallacies of the Energy Transition

It has frequently been described as the missing link or Holy Grail of the energy transition, yet policymakers are determined not to support it...

Matt commented on ...
The Value of Diversifying Uncertain Renewable Generation through the Transmission System

Whatever shortfalls grid-connected EVs might encounter for these services, could be made up via second use of EV packs, also called EV pack...