If our societies are to decarbonize, the current centralized electricity grid structure will need to evolve. This is already on the way – more and more households and businesses are moving from being consumers of power to “prosumers” producers as well as recipients of electricity.

There are many factors which will interact to facilitate – or hinder – this transition. Governments, utilities, regulators, finance companies, all have a part to play, but also the ordinary person in the street. Technological innovations need to be embraced by the public.

The Segway, Sinclair C5, and Google Glass were all clever, functional technologies, yet all failed because the public did not accept them.

This is the famous Rogers Technology Adoption Curve, first revealed at the Iowa State University in 1957, which gained prominence in Everett Rogers' widely acclaimed 1962 book Diffusion of Innovations. It is a key to understanding how innovations gain acceptance in society. 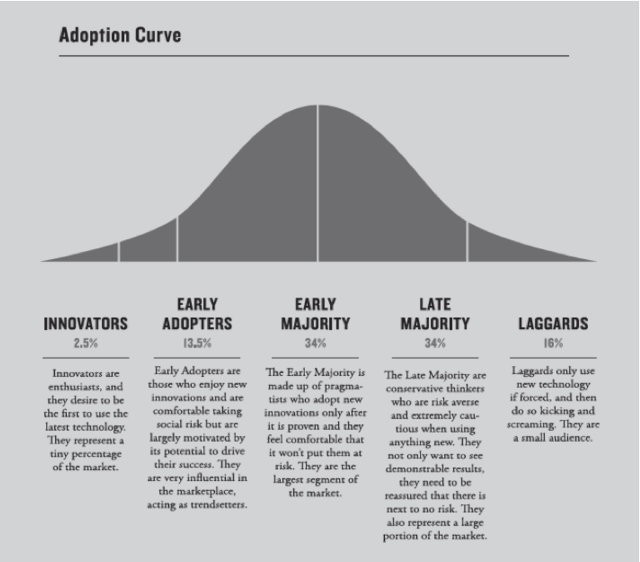 In order to create a smart grid, the average home or business will need a smart meter. In the UK, the roll-out of these has been a qualified success. 15.3 million operational smart meters have been installed as part of the British government's scheme, according to data published in March 2019. This averages out about 564,474 meters connected per quarter across the UK.

In 2009 the UK Government started the Smart Meters Implementation Program, intending to provide a total of 53 million smart meters to over 26 million homes, smaller businesses and public sector premises by 2019. That goal has not been reached. In addition, the first generation of smart meters, called “SMETS1” meters, have had teething problems – they age badly and consumers had great difficulty changing utilities if they had one. They have been superseded by superior designs, but of course many are still installed in premises.

Although smart meters aren't necessarily the most exciting consumer product, 56 per cent of 21-34 year olds expressed an interest in having one installed. Consumers who use them save on average the modest sum of £32 ($42) per year. Over half (57 per cent) of survey respondents reported that they had begun to turn lights off and heating down when possible, while 46 per cent of users indicated that they had started to keep an eye on their energy usage. 29 per cent of respondents also said they researched tips and tricks to reduce their energy consumption.

It looks like the UK is somewhere between the Early Adopters and the Early Majority. That is not surprising, as the full benefits of smart grid connected urban living are not available generally in the country, although some new housing developments come with solar panels, batteries and other smart-grid applications, but of course these probably only appeal to the Innovators amongst the population.

A significant proportion of the UK population (over 30 per cent) are indifferent to smart meters, they don't think they will save them money or they are not very technology aware and do not want to change from their old meter.

The UK does have a Smart Cities Engagement Program, which was engaging with the public, local authorities and other stakeholders to create more awareness of the benefits of these technologies. Although this initiative has had some success, the impact of COVID-19 has meant that local authorities have paused or shelved smart city initiatives.

The pandemic, loss of jobs and fears for the future do not make the job of the utilities (who have been instructed by the UK government to install these meters) any easier: people who are worried about their employment are probably not very concerned about whether their household would be better off with a few smart appliances. It does seem that the UK government needs to get behind smart grid innovations, but unfortunately the political chaos of the pandemic, coupled with Brexit, means that this potentials for improving the grid system are being neglected.