By far, the most damaging events to the United States power grid are tropical cyclones.  In 1980, NOAA’s National Centers for Environmental Information (NCEI) began recording billion-dollar weather and climate disasters including drought, flooding, freezing, severe storms, tropical cyclones, wildfires, and winter storms.  Over the 21 years, there have been 291 billion-dollar events with estimated damages of $1.9 trillion — $1.0 trillion from tropical cyclones and hurricanes alone.  The average cost per year of these storms has been $24.1 billion (bn).  The storms have been more frequent and more expensive as of late.

Along with NOAA’s billion-dollar events, according to data compiled by the U.S. Department of Energy (DOE), electric companies have reported more than 2,500 major outages since 2002.  Nearly half of those outages were caused by weather conditions such as storms, hurricanes, and unspecified severe weather, with roughly 211 million losing power in weather-related disruptions.

Supporting grid hardening efforts, on May 25, 2020, President Joe Biden addressed members of the Federal Emergency Agency’s (FEMA) team at the National Response Center in Washington, D.C., on preparation for the upcoming 2021 hurricane season.  One element of the presentation was the announced increase in funding for resilience-building efforts, including pre-disaster mitigation resources to prepare for extreme weather events and other disasters.  The funding ($1 billion) for the Building Resilient Infrastructure and Communities (BRIC) program represents twice that available during 2020.

Hurricane ‘Ida’ could be the next major hurricane

Since 1953, the U.S. National Hurricane Center has been alphabetically naming tropical storms in the Atlantic basin.  They are now maintained and updated by an international committee of the World Meteorological Organization (WMO).  Each year, the organization generates a new set of names – some regurgitated from past events, and some retired forever.  Based on an analysis by the Hitachi ABB Power Grids’ Velocity Suite research team, of the 67 most costly hurricanes, storms starting with the letter ‘I’ in their name accounted for nearly 20% ($178.1bn) of all tropical storm damages ($926.7bn) over the period.  Storms with the first letter between ‘H’ and ‘M’ in the alphabet, six letters in all, accounted for more than two-thirds of damages – 67.6% ($626.3bn).  Based on these statistics, in 2021, the most likely storm to top the list of most damaging is ‘Ida’ – when and how severe the event becomes is still a mystery but expect it to develop in late August or September, which is typical of letter ‘I’ storms.

Source: NOAA, names provided by the World Meteorological Organization, May 2020

According to the National Oceanic and Atmospheric Administration’s (NOAA) National Hurricane Center, there were a record 30 named storms in the Atlantic Basin in 2020 – with a record 11 making landfall in the United States.  The previous records were 28 named in 2005 and 9 making landfall in 1916 – the records go back to 1851.  In addition, on September 14, 2020, five tropical cyclones were active at the same time in the Atlantic – tying a September 1971 record. 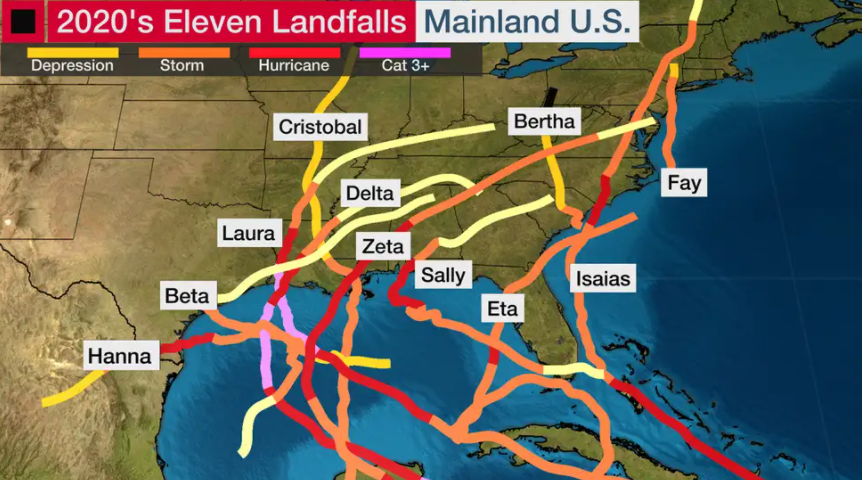 According to the National Weather Service (NWS), every mile of the countries Atlantic and Gulf coasts was under a tropical watch or warning at some point during the year.  An average tropical storm season in the Atlantic Basin produces 14 named storms, six hurricanes with three classified as ‘major’ – in 2020, there were 14 hurricanes with seven major hurricane events. 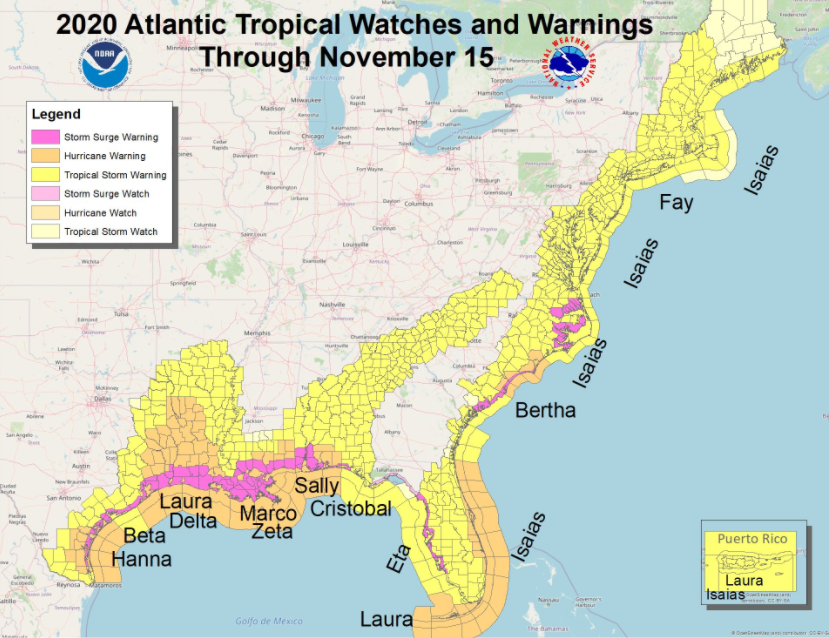 During the year, the damage to the nation’s coastal grid was substantial, particularly along the Gulf Coast, in and around Louisiana.  A record five named storms struck Louisiana in 2020 – 3 were hurricanes (Delta, Laura, and Zeta), and 2 were tropical storms (Cristobal and Marco).  The most damaging in terms of property and infrastructure was Hurricane Laura.  The Category-4 storm struck the coast near Cameron, Louisiana, on August 27, 2020, with sustained winds at 150 miles per hour (mph) – the strongest hurricane to strike the state since the “Last Island” storm in 1856.  Total property and infrastructure damages were estimated at $19.1bn.

The state’s largest utility, Entergy Louisiana, was severely impacted by Hurricane Laura.  One month after the storm struck, the company estimated damages at about $1.7bn, including power outages for 90% of their approximate one million customers.  Along with the outages, Entergy Louisiana reported that Hurricane Laura was responsible for the damage and destruction of roughly 14,000 distribution lines, 1,900 transmission structures, and 300 substations.  In addition, about 25,000 responders from outside utilities helped in rebuilding the company’s grid.

Despite the heavy infrastructure damages incurred in 2020 by the company, over the years, Entergy has implemented numerous grid-hardening processes, including preventive maintenance programs, installing steel transmission structures near the coast, evaluating substations that could flood, and installing ‘isolation’ devices on lines to reduce power outages.

The active 2020 season is estimated to have caused upwards of $50bn in economic losses.  However, as damaging as that is, there have been much more costly storms and seasons.

The costliest Atlantic hurricanes in history

The top 12 in terms of estimated property damage according to statistics compiled by NOAA’s National Centers for Environmental Information (billions of USD, nominal) include:

In terms of economic damage, the costliest year ever was 2017, at nearly $300bn.  Of the twelve most expensive years on record, six have occurred during the past decade.

Hurricanes are the most costly and damaging weather events to affect the United States.  During 2017 and 2018, five of the top twelve most costly Atlantic hurricanes in history wreaked havoc on the coastal power grid. During 2017 alone, major storms struck the Gulf Coast, Puerto Rico, and parts of the U.S. east coast, leaving wide areas of infrastructure and property damage.  The storms included Harvey ($125bn), Maria ($90bn), and Irma ($77.2bn).

2021 to be another higher-than-normal storm season

Most of the early season prognosticators expect a higher-than-normal storm season.  On May 20, 2021, the National Oceanic and Atmospheric Administration’s (NOAA) Climate Prediction Center’s Annual Outlook, the 2021 hurricane season is forecast to be more active than normal.  Highlights include a 60% chance of above-normal activity with 13 to 20 named storms – 6 to 10 could become hurricanes.  The season runs from June 1 through November 30.  The Weather Company projects 19 named storms, eight hurricanes, and four major hurricane events. 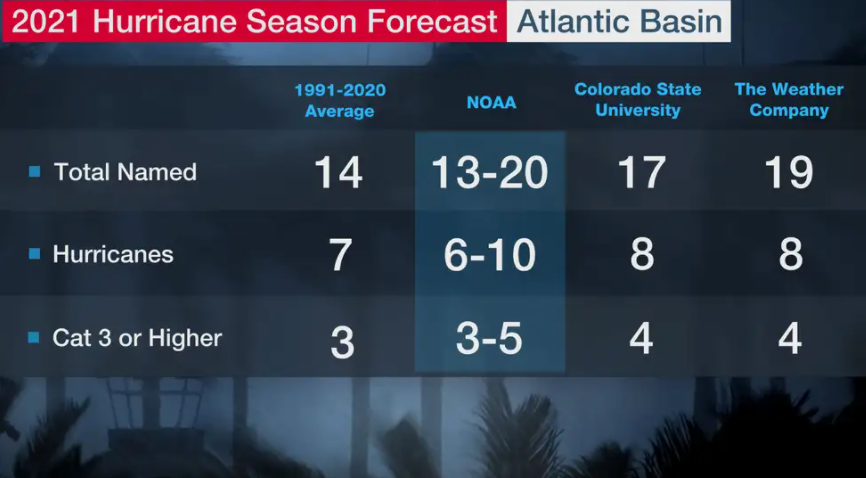 What is driving the above-average forecasts

El Niño Southern Oscillation (ENSO) conditions are currently in the neutral phase, with the possibility of the return of La Niña later in the hurricane season.  Those conditions, plus warmer-than-average sea-surface temperatures, weaker tropical trade winds, and the likelihood of increased west African monsoons, support the higher-activity projections.

The first named storm of 2021 occurred on May 22 when subtropical storm ‘Ana’ formed near Bermuda in the Atlantic Ocean.  Though relatively weak, sustained winds reached 45 mph.  Tropical storms are named when sustained winds top 39 mph, while hurricanes are designated when winds reach 74 mph.  The storm was short-lived and dissipated as it moved northeast.  Though the storm formed at a relatively early date, it is not unprecedented.  For example, in 2020, there were two named tropical cyclones in May and one in the first week of June.  The official hurricane season runs from June 1 through November 30.

Utility companies located along the Atlantic Seaboard and Gulf Coast are better armed and prepared today than in the past.  With heavy investment in grid digitization and hardening infrastructure, companies are in a stronger position to speed recovery after storms subside.  There are many ways that companies can secure their transmission and distribution assets, but it is nearly impossible to prevent widespread grid damage when strong hurricanes hit.  When that happens, the most important goal is to get the lights back on.

Investment in stronger infrastructure such as reinforced steel and cement poles and advanced sensor technology to locate trouble spots and speed repairs are just some of the grid hardening efforts deployed today by utilities in the Atlantic and Gulf hurricane belt.  The region is one of the most heavily populated areas in the country.  The two most often impacted states, Florida, and Texas, have experienced tremendous population growth in recent years.  Today Texas and Florida are home to about 30 and 22 million people, respectively – only the state of California, with around 40 million people, is home to a larger population.

Investments in smart sensors, controls, and communications systems improve customer service and reduce the impact of outages. These enhanced systems have led to better power-outage tracking, customer notification, and intelligent switches for system control.  Through grid hardening and resilience-building investments, today’s utility companies located in hurricane-prone regions are in a much stronger position to quickly recover from disaster.

Since Atlantic and gulf coast tropical cyclones are by far the costliest weather events affecting the electric grid, we will be closely watching for the formation of low-pressure disturbances off the western coast of Africa and the Caribbean region as the summer progresses.

There's something foreboding about seeing the name of the storm ahead of time that might be the next 'big one' you reference and look back on years from now-- but maybe that carries certain power in terms of preparations and planning!

Matt, thanks for your comment.  I agree, 'there is something 'foreboding' about the storms ahead.  At the moment, the Atlantic basin is calm . . . but as the summer evolves it is almost certain a plethora of big storms will evolve once again.  There is something also foreboding about the overall cumulative property damages from tropical cyclones . . . .  now approaching $1 trillion -- most of that in the past five years alone.  Thx again for your comment.