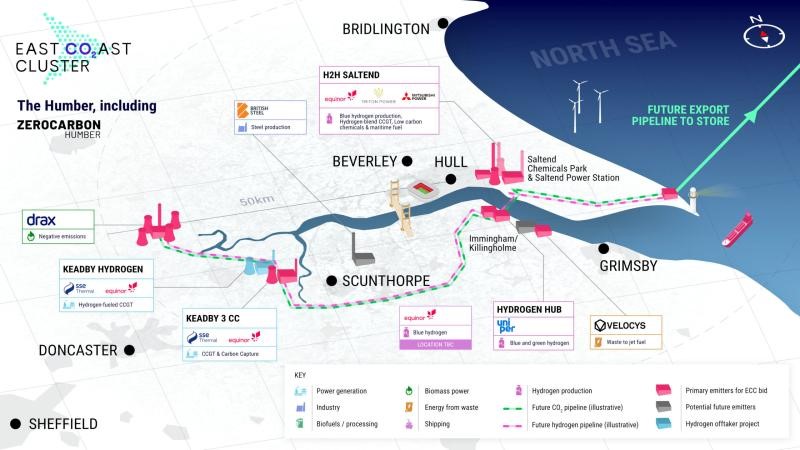 As part of its Cluster Sequencing Process, the Government has shortlisted 15 projects from across the East Coast Cluster to negotiations.

That includes two projects from Zero Carbon Humber companies, both of which could play a key role in making the Humber the world’s first net zero industrial region by 2040.

Last year, the East Coast Cluster – a collaboration between Zero Carbon Humber, Net Zero Teesside and the Northern Endurance Partnership – was named as one of the UK’s first two industrial clusters to be decarbonized through carbon capture and storage technology.

The announcement this week represents a major milestone in efforts to deploy carbon capture and hydrogen infrastructure across the Humber, with the projects taken forward set to be among the first to be connected to the shared infrastructure and positioned to negotiate with Government on business model funding.

The selected projects will now proceed to the due diligence stage of the Phase-2 cluster sequencing process to allow them to connect to the East Coast Cluster’s CO2 infrastructure and be operational in the mid-2020s.

Projects taken forward to negotiations include:

The Government is also due to provide further details in the coming weeks on the evaluation and selection process it intends to run for greenhouse gas removal (GGR) technologies such as the bioenergy with carbon capture and storage (BECCS) project at Drax Power Station.

Stay informed at the over 2000 strong professionals group: Business Opportunities for the Hydrogen Economy

As part of its Cluster Sequencing Process, the Government has shortlisted 15 projects from across the East Coast Cluster to negotiations. That includes two projects from Zero Carbon Humber companies, both of which could play a key role in making the Humber the world’s first net zero industrial region by 2040.

Jim commented on ...
Hurricane Energy
That is a tall order to try and captuer even a small part of a storms energy.

Richard commented on ...
Gas-Electric Harmonization Initiative in NAESB is on track to succeed
Thanks for sharing your insights, Jim.

Jim commented on ...
Gas-Electric Harmonization Initiative in NAESB is on track to succeed
NG is a mis step. It is not clean or efficient or sustainable. Most comes from Fracking for Oil. NG is going backwards.

Jim commented on ...
Progress update on OPPD’s new solar and natural gas projects
The NG makes it an expensive and polluting back up. It should also be a combined cycle NG plant so it is more efficient. I didn't see rhat in the...