What are some industries, sectors, or even historical case studies that might be overlooked, but you believe would be invaluable for the nuclear industry, advanced reactor developers, etc. to examine or investigate further?

The nuclear community has been keen on seeking lessons, models, and templates from other industries and sectors. With respect to many of the issues, what are some industries, sectors, or even historical case studies that might be overlooked, but you believe would be invaluable for the nuclear industry, advanced reactor developers, etc. to examine or investigate further?

A moored floating nuclear power plant that utilizes the latest spar technology in use by the offshore petroleum industry offers a path to economic viability.  Plant capacity could range from 100 MW to 750 MW or larger based on a modular design concept. This concept is covered by U.S. Patent US9556857(B2), the rights to which are owned by OTEC International, LLC.

Building a new nuclear power plant on land entails myriad difficulties, not the least of which are where to locate it and how to minimize environmental or safety impacts. Floating spar technology offers a combination of characteristics that is almost ideal for application to a nuclear power plant.  Among them are:

The plant concept would be based upon being moored in water about 1500 feet deep with a submarine cable to bring the power ashore.  This is well within the current technology experience for both spars and cables which now are used in water depths of 4000 feet or more. Disclosure: I spent the early part of my career as a Lead Engineer designing and constructing a successful PWR power plant that is still in operation. Since 2008, I have been leading the engineering effort to design a commercially viable OTEC based power plant and am named on multiple patents from that effort.

I will attack the premise adoption of nuclear energy is dependent on new designs, however. Every pressurized-water nuclear reactor installed in the last thirty years has proven exceptionally safe, reliable, and profitable. Adoption of nuclear energy is a battle with its detractors and competitors, not with technology, and the idea of "advanced nuclear" has become little more than a can they can kick indefinitely down the road.

Existing reactors are advanced reactors. Let's not make the problem of adoption more formidable than it needs to be.

My point was that spars could house an already proven PWR design.

Seems to me, most of the advanced reactor developers are approaching the marketplace from the wrong direction. Namely, the point of the exercise is reasonably priced and competitive energy, not novel reactors.

The advanced reactor industry needs to recognize that hitching-your-star to big government carries inherent problems relative to providing a competitive product. Government bureaucrats should not be calling the shots.

A root cause of the heavy financial baggage weighing down advanced reactors also lies with the government, namely the regulators. The advanced reactor developers need to develop passively fail-safe designs and aggressively push back on grossly excessive overregulation.

The considerations I have noted need to be dealt with if the advantages from other sectors are to be effectively pursued.

Michael is correct, leaps in technology should not be the objective, proven designs that add passive safety features are critical AND can be implemented cost competitively.  This is particularly critical due to the polarizing nature and huge negative reputation of nuclear power - mostly un-deserved, but that is an opinion.  The key advantage at this point is that nuclear power is the only carbon free base load generation that is proven in the marketplace - leverage that, improve safety and drive down costs.  Due to these issues, projects will have to be smaller and faster - thus this defaults us to SMR's.

As noted in this blog post the case of the U.S. Railroad Administration (USRA) is instructive in this regard.

The use of reference designs in the U.S. has a good history in the form of the experience of the U.S. Railroad Administration during World War I. Is there a case to be made to borrow the idea of reference designs from steam locomotives to apply it to the next generation of advanced nuclear reactors?

In the second decade of the 20th century, just over 100 years ago, steam locomotives, needed to make a major leap in terms of designs that would deliver more power more efficiently and which could be manufactured quickly and in large numbers.

In 1918 Railroads Were not Getting the Job Done: The problem in 1918 AS THE U.S. entered the war in Europe, was that U.S. railroads were unable to mobilize their equipment, locomotives and rolling stock, and rail lines, to support the vast logistical demands of the war effort.

The locomotives in service at the turn of the century were under powered for the train loads that the war time effort demanded of them. Rail cars were unable to carry the larger volumes of cargo that needed to get materials and equipment to U.S. ports to support troops in Europe.

For instance, 625, or one third of the locomotives built using USRA designs in the period 1918-1928, were among the most powerful and efficient type for moving freight. This was the 2-8-2 wheel arrangement, also known as the Mikado type. (Image below: An example of the locomotive as built for the Nickel Plate Road RR) 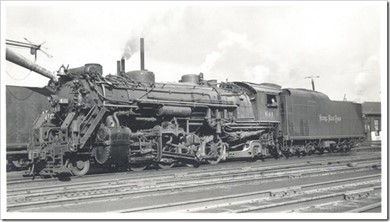 The design was so successful that it was copied by 20 countries for their railroads.

The locomotive designs prepared by the USRA were the nearest thing the American railroads and locomotive builders ever got to standard locomotive types.

After the USRA was dissolved in 1920 many of the designs were duplicated in significant numbers with 3,251 engines of various USRA designs being constructed overall.

A total of 97 railroads used USRA or USRA-derived locomotives. U.S. railroads continued to adapt USRA designs for new steam locomotives until 1953 more than 45 years after the concepts came off the drawing boards.

Westinghouse Files for Vendor Design Review with CNSC
Beware of starving the enemy of oxygen....
Oswego nuclear plant looks to the future, will be first in U.S. to make hydrogen
100% Clean Electricity by 2035?

Matt commented on ...
100% Clean Electricity by 2035?
John-- what's your opinion on the benchmark being 100% clean energy by a given year.
Energy Central Jobs
Featured Jobs
More Jobs