Contact
Follow
Profile
In late April 2022, the Energy Information Administration (EIA) reported that generation from renewable resources totaled 795 million MWh in the US in 2021, surpassing nuclear generation, which totaled 778 (visual below). Renewable generation also exceeded coal in April. It is another significant milestone for renewables. Moreover, all indications suggest that the former will continue to grow at double digit rates per annum for the foreseeable future while the latter will remain flat or dwindle over time. 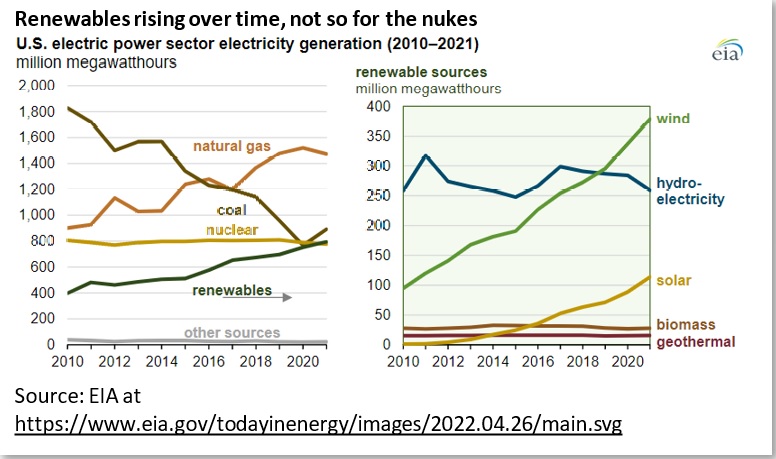 Generating 1,474 million MWh in 2021 natural gas was the biggest source of electricity generation, while coal generation increased for the first time since 2014 exceeding both renewables or nuclear power. Total generation in the electric power sector increased slightly in 2021, but it remained below its record-high in 2018. This is most likely an anomaly due to the current high natural gas prices.

Moreover, on 29 March 2022, wind turbines in the Lower 48 states produced 2,017 GWh of electricity, making wind the second-largest source of electric generation for the day, second only behind natural gas. Daily wind-powered electricity had surpassed coal-fired and nuclear electricity generation separately on other days earlier this year but had not surpassed both sources on a single day.

Consistent growth has led to more wind-powered electricity generation. In September 2019, wind surpassed nuclear capacity, but generated less because of differences in those technologies’ utilization: the average capacity factor for wind was 35% vs. 93% for nukes. Wind currently ranks as the third-largest source of generating capacity in the US, behind natural gas and coal-fired generators. 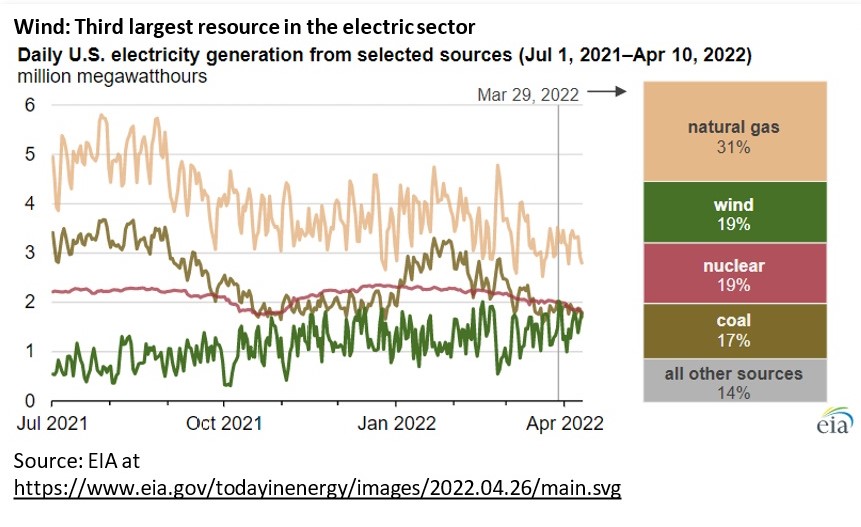 March is typically the best month for wind output in the US. On March 29, the Southwest Power Pool (SPP), which covers parts of Oklahoma, Kansas, Nebraska, North Dakota and South Dakota, and the Electric Reliability Council of Texas (ERCOT) both reported new wind generation records meeting 88.5% and 67.2% of the demand on the two networks for the same day, respectively.

For the first quarter of 2022, wind and solar produced a record 34% of the power dispatched by ERCOT. For the period, wind generation was up 14% while solar output increased 85%. Together, wind and solar accounted for 71% of the generation increase during the quarter.

In a number of states including California, much of the renewable growth may be attributed to the regulatory push – such as carbon neutrality targets, mandatory renewable portfolio standards (RPS), or both.

But in Texas and a number of other so-called “red-states” there is no such political or regulatory push. Wind and solar are cheap and plentiful, and that is driving the rise of renewables.

Thanks for these statistics though the headline seems fairly obvious to anyone in the industry given the skyrocketing investment in and construction of renewable energy resources while nuclear has seen almost no investment and no new nuclear plants have been brought online. An interesting point illustrated by the line charts is that nuclear appears to be the steadiest and most firm energy resource we have, which could be an important selling point in efforts to make it a critical player in a clean energy future.

Conventional generation on the grid is modulated to accommodate available renewable output, which must be used when available. Natural gas combined-cycle generators are the most adaptable to load following, while nuclear generators are typically operated at or near capacity because they are less flexible and their variable costs are low.

This article makes an "apples and oranges" comparison between clean firm nuclear power and inherently intermittent solar and wind power.. The Sun does not always shine nor does the wind always blow with sufficient force to turn wind turbines. Those problems are related to the physics of power generation and will not be solved by additional investment. Nope.  Investments in solar and wind are a way to embed inefficiently-dispatched natural gas (with its attendant emissions) in a power grid. This reality was recognized in the August 11, 2016 Washington Post article, "Turns out wind and solar have a secret friend: Natural Gas."   http://tinyurl.com/Natural-Gas-Secret  . In contrast, nuclear power does not require natural gas for grid integration.  There is considerable seasonal variation in solar and wind generation. The author "cherry picks" a month in which solar and wind generation is high in a state with high solar and wind penetration., California.  However, since solar and wind are nondispatchable, there are times in California when there is too much solar and wind. The result is that Californians now pay billions annually to have adjacent (and sun synchronous) states take our excess solar and wind power. This is one reason why California retail rates are some of the highest in the lower 48 states. BTW, grid storage batteries are far too expensive to be practical. Using popular lithium-ion batteries would cost Californians twice the state's annual budget just to purchase batteries to store 24 hours of California's power consumption. Those batteries would need to be replaced about once a decade. Finally, there is the problem that solar, wind, and batteries do not contribute rotational inertia to the power grid, which stabilizes it. Instead, their random fluctuations destabilize the grid.  These are some of the reasons why the independent nonprofit Californians for Green Nuclear Power, Inc. website https://CGNP.org backs nuclear power.  President Biden and California Governor Newsom are now backing an extension for the operational life of Diablo Canyon Power Plant because it will help keep the state's air conditioners humming when the Sun sinks below the horizon. When California Governor Gray Davis made a set of policy choices which caused the ENRON power crisis in the state between 2000- 2001, the state's businesses and residents were angered by the unreliable power.  The lost productivity cost between $200 - $400 billion. They recalled Gray Davis in 2003, ending his political career.

Let's be clear - this is not just a US trend.  Renewables are expanding rapidly WW as well.  Renewables generation WW has grown by 858 TWh in the last two years.  With large installation numbers in 2021 - we will see further big gains in 2022.

The sum of annual production for dispatchable Coal, natural gas, Oil, Hydro, and Nuclear show how important those energy forms are for 24/7 reliability relative to solar and wind. The Sun doesn't always shine nor does the wind blow with sufficient force to turn wind turbines. That is why the world needs dispatchable power.

The sum of annual production for dispatchable Coal, natural gas, Oil, Hydro, and Nuclear show how important those energy forms are for 24/7 reliability relative to solar and wind.

Let's hope that at some point , we begin to see some growth in nuclear generation and it can help contribute to ZC growth along with solar, wind and hydro. Not gonna happen in 2022 however, as we will see another huge year for wind/solar growth and a flat/decline year for nuclear.

If green energy is so wonderful, why does it continue to be ward of the government?
No more subsidies, no more mandates.

The subsidies were only suppose to be “temporary” and that was 30 years ago. Pretty clear green energy is crushing the poor and middle class by causing electricity to be a luxury item. The investment class and the Democratic Party are feasting on the average citizens wallets.

The subsidies were only suppose to be “temporary” and that was 30 years ago. Pretty clear green energy is crushing the poor and middle class by causing electricity to be a luxury item. The investment class and the Democratic Party are feasting on the average citizens wallets.

Amazing on how much you can get wrong in one paragraph...

1) Real electricity costs are down. 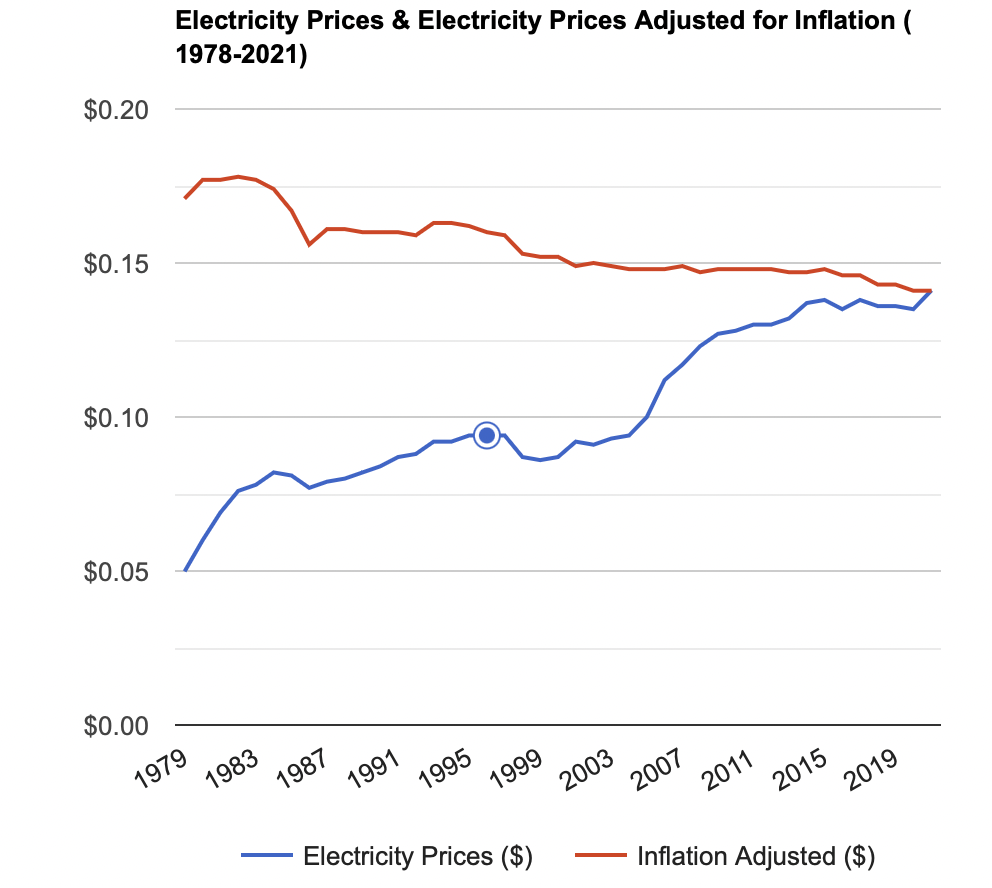 2) Many of the top renewables states are Republican strongholds and have among the lowest electricity prices in the country. Two examples:

3) The "father" of the Wind PTC tax credit - was Sen Grassley a Republican from Iowa.  Those damn Republicans - bunch of socialists.

By the way - I agree that subsidies should be eliminated - as soon as a carbon tax is instituted.

Then again, based on some your comments - you could care less about how renewables have helped in the reduction of CO2 in US over the last decade. 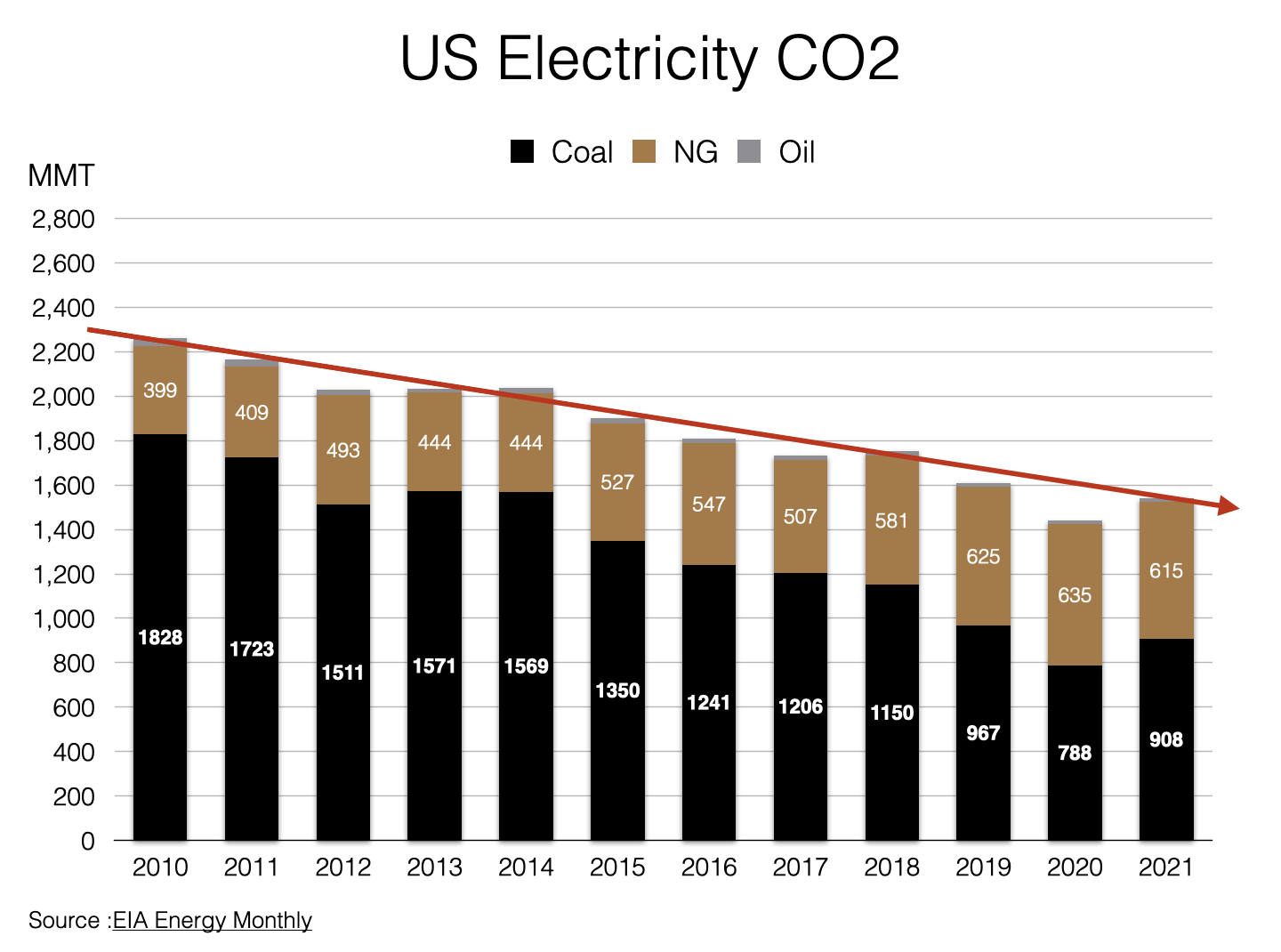 Claiming ‘lowest’ for a heavily subsidized product like green energy is disingenuous. Remove the taxpayer production gift (roughly $24/mWh) and then see what the marketplace concludes.