Managing Director of Geoclime, LLC, providing quality and risk management consulting for energy, water, science and engineering. Multiple careers in government and industry as a research...

U.S. Natural Gas is Abundant and Affordable ― Even with Exports

Domestic production of U.S. natural gas resources has surpassed most authoritative forecasts since 2007. Even with gas demand for exports and manufacturing, gas for power generation should remain abundant and at prices below the most recent peak national price in 2014.

The good news is that the domestic natural gas supply available to U.S. power generators very likely will remain robust and cost-competitive – despite growing exports of liquefied natural gas (LNG) and the resurgence of manufacturing that uses gas as a feedstock.

Since the “shale boom” began in about 2007, production of natural gas in the U.S. has consistently exceeded forecasts made by the Energy Information Administration (EIA) although EIA’s upgrades to their forecasting methods after 2013 have closed the gap (see “Supply” chart).

Prior to the emergence of shale gas production, more than 20% of U.S. gas production came from the Gulf of Mexico (GOM) where hurricane activity frequently interrupted or shutdown production ― creating significant supply crimps. Indeed, the very active hurricane seasons of 2005-2008 resulted in one-fourth to three-fourths of GOM gas production being shut-in for several months after each of many events. But thanks to the robust growth in shale and similar unconventional sources, now more than 95% of all U.S. gas production is from onshore fields so that disruptions to the GOM production are much less impactful to gas users.

Advances in technologies for drilling and completing horizontal wells, including more effective hydraulic fracturing techniques, have sustained production growth in mature gas fields and unlocked the potential of newer fields. Experience has shown that, as long as gas producers can sell products at above breakeven prices, production growth is assured to continue. 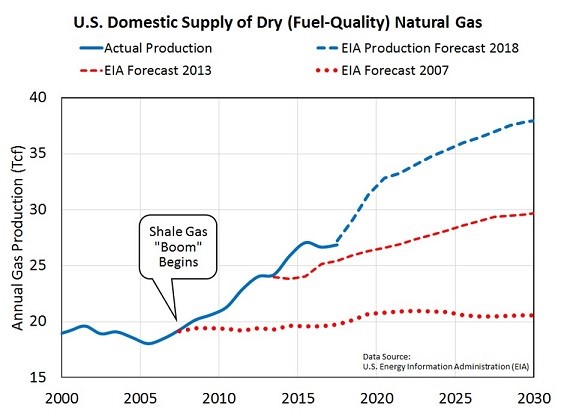 Both LNG and pipeline exports of gas comprise a new source of demand although exports are expected to have only a modest impact on domestic gas prices.  Thanks to the anticipated robust growth in production, EIA expects that total exports should peak at less than 25% of domestic production. The associated track of annualized domestic gas prices is expected to rise slowly but remain below benchmark prices set in 2014 ― and far lower than in the days when GOM shut-ins drove price volatility.

The modest year-on-year slope of the EIA price forecast curve generally agrees with an independent analysis performed by NERA Economic Consulting that found average citygate prices ― as typically paid by utilities ― followed a slope similar to that for export growth but at levels significantly less that world prices and historical U.S. peak prices. EIA data show that gas prices for electric-power generation characteristically trend between the upper bound of citygate prices (i.e., the NERA price forecast) and the lower bound of Henry Hub prices (i.e., the EIA price forecast).

The summation of best available forecasts indicates that natural gas for power generation will be priced at levels far below historical peaks, including the most recent post-shale peak in 2014. 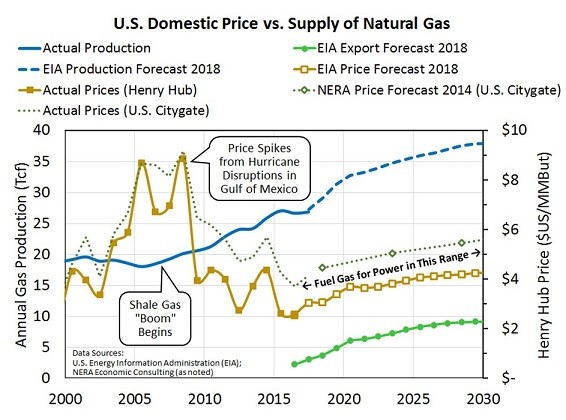