Trends in Power Generation: Backswitch from Gas to Coal?

In the course of 2021 so far, prices on the energy markets have reached record highs. Coal and gas prices in particular have risen sharply, reaching their highest levels in over a decade. These developments have partly led to a backswitch from gas to coal-fired power generation and thus, in connection with rising CO 2 prices, also to high electricity prices. In the following we want to clarify the connections a little.

The prices of the front months and quarters for the fuels hard coal and gas have reached over 13-year and even all-time highs in the past few weeks. On the coal price side, rising global electricity demand led to higher consumption. Together with the simultaneous delivery restrictions due to strikes and weather events in Colombia and Australia, this led to sharply rising prices. The prices of the API 2 index for hard coal more than doubled from just under USD 70 / ton at the beginning of 2021 to over USD 160 / ton in September.

Figure 1 shows the normalized prices of the futures market contracts Q4 2021 for the hard coal price index API2 and the European reference gas price at the TTF trading point in the Netherlands from the beginning of 2020 to September 9th, 2021. The normalized price movement since the beginning of last year shows that the Prices have moved up very sharply, especially from the 2nd quarter of 2021 onwards. 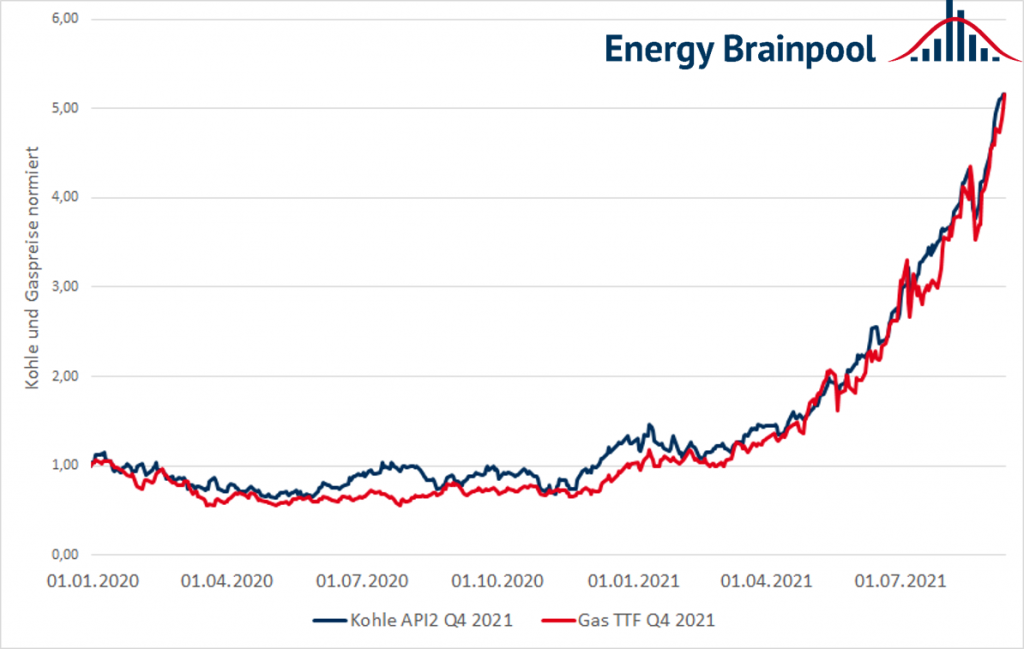 Power from coal is coming back

Electricity demand in Europe has risen again since the pandemic-induced slump in 2020. At the same time, the wind energy feed-in was very low compared to the average in the first half of 2021. In Germany, electricity generation by onshore wind turbines recorded a year-on-year decline of 21 percent, while offshore plants fell by 16 percent. This means that more and more thermal power plants have generated electricity. The rising fuel costs and the higher CO 2 prices of over 50 EUR / ton thus had a price-increasing effect on the electricity prices.

The mentioned effects of low generation from renewable energies and higher consumption led to a significant increase in coal-fired power generation, at least in Germany (source: Fraunhofer ISE ). Lignite power plants, although with increasing CO 2Prices, but did not have to calculate with rising fuel costs, experienced an increase in electricity generation of almost 38 percent in the first half of 2021 compared to the same period of the previous year. Likewise, the generation of hard coal power plants up to the end of June 2021 was 39 percent above the values ​​from the first six months of 2020. Nevertheless, generation from coal power in the first half of 2021 was still below the values ​​from 2019. Figure 2 shows the percentage Shows changes in the net electricity production of the various generation technologies in the first half-year comparison between 2020 and 2021. 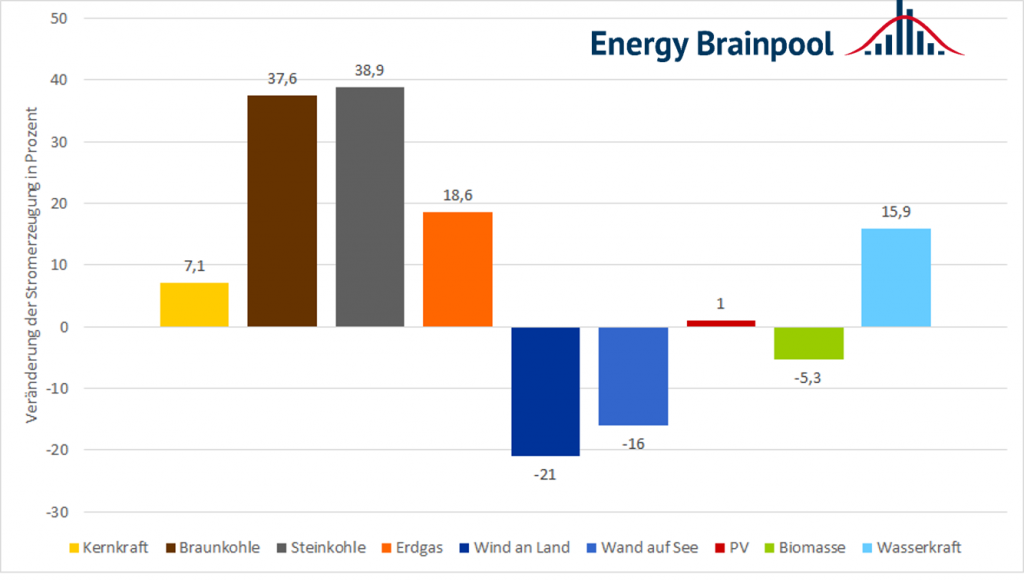 Despite the sharp rise in gas prices, there is still a fuel switch from coal to gas in the overall view. In the first six months of this year, for example, German gas-fired power plants generated almost 19 percent more electricity than in 2020 and 25 percent more electricity than in 2019. The increase in coal-fired power generation is thus primarily driven by low levels of renewable generation and increased demand for electricity, but also in part due to the high gas prices this year. However, a clear backswitch from gas back to coal cannot yet be identified in Germany, despite increasing coal-fired power generation.

In any case, the current development shows the complex relationships on the energy market and the interaction of the various commodity prices with the shifts in the generation mix.

"In any case, the current development shows the complex relationships on the energy market and the interaction of the various commodity prices with the shifts in the generation mix."

What the current development shows is that the premature closing of Germany's reliable, clean nuclear plants is one of the worst environmental mistakes in history - and has lead to thousands more deaths from respiratory diseases than radiation from Chernobyl ever will.

Simon, If it is strictly a choice by cost I would thing Renewables like Hydro (24/7)  ,Solar ,Wind  and Geo Thermal would be the only choice. Add in new battery storage and you can't lose on cost and zero pollution and waste.  So what is the status of their Renewable growth?

As Bob pointed out Clean Nuclear is not being used but it have a finite uranium source , uses lots of water and creates waste that have never been solved.

Jim, your concern over water use is misplaced. Once through cooling using seawater (French approach) does not use much water, but using cooling towers does because water is evaporated into the air. Air cooled condensers can be used (common on many gas plants) but production costs rise (a few percent) because of lower efficiency and higher build cost.
Nuclear’s key problem is the resource provides relatively expensive clean power.

The spent fuel issue is more of a long range disposal problem. Ultimately, the stuff should probably be buried deep underground, and several countries are doing that. However, like many issues, the politicians just keep kicking the can down the road. Unfortunately, the issue will probably not be resolved in the US for a few more generations.  Should note we still have lots of highly radioactive material from making nuclear weapons over 50 years ago and the stuff is still sitting in leaking tanks. The stored civilian nuclear fuel is reasonably safe and will be for quite some time. However, the irritating problem keeps being swept under the rug by the politicians.

Small point lignite is not hard coal, but I agree with your analysis.

Perhaps getting rid of nuclear power in Germany was a really bad idea, as the result is an unbalanced energy supply system with a major vulnerability to excessive intermittent green energy.  I agree with Bob M.