Last year we started a 3-part series on Saving the planet with nuclear power.  First, we talked about keeping the existing nuclear fleet operating as long as possible (Saving the planet step 1).  Then, in step 2, we talked about building a new global fleet of large Generation III nuclear plants.  Today, we are concluding this series with a discussion on the role of Small Modular Reactors (SMRs).

SMRs represent the next generation of nuclear energy innovation. They are defined as nuclear plants that produce 300 MW of electricity (or combined heat and power) or less replacing the traditional economies of scale of large reactors with economies of numbers. Their objective is to reduce the risks of delay and cost overruns associated with more traditional large nuclear units by deploying them more quickly and at lower cost. 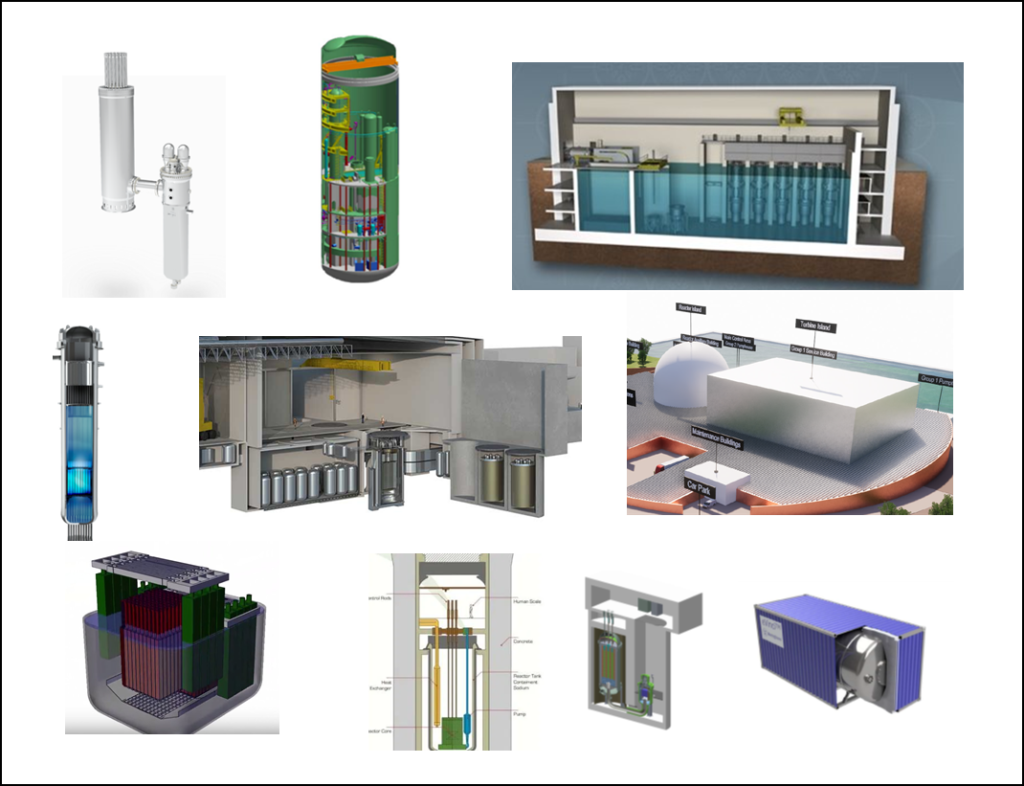 Some of the many SMR designs available in the market

While the fundamental objective of SMRs is to enable the expansion of the nuclear market to include a broader customer base who can benefit from these lower cost solutions, SMRs actually represent two different sizes of reactors, each with its own well defined use case.

On-grid applications are an evolution of more traditional electricity generation and are rooted in the familiar.  They will be connected to electricity grids as an alternative to fossil and other forms of generation. The owners/operators will likely be utilities who are in the business of generating electricity, both government owned and private corporations.  With their lower costs and shorter deployment schedules, they will appeal to a much larger market of new potential owners for whom large units are simply not an option to fit their systems or, who prefer to manage their risk by making their generation investments in smaller increments.

Off-grid applications are more revolutionary.  Very small SMRs (vSMRs or micro SMRs – about an order of magnitude smaller than grid-scale SMRs) could meet the needs of remote communities or commercial enterprises that are not grid-connected including remote mining and other industrial applications demanding both heat and power.  The customers are non-traditional users who are often in another business, such as mining, but who need low carbon economic energy as an input to their operations.  While economies of scale do have an impact on costs at this very small size, these vSMRs often compete with diesel generation that can be very expensive, polluting, and in some remote applications, difficult to ensure fuel availability due to restricted transport options.

SMRs can be a game changer.

We know from previous studies (MIT and NEA) that renewables cannot decarbonize the world alone.  In fact, these studies point to the same conclusion, that fully decarbonized systems are always lower cost with nuclear than without.  A new recently released US study (Cost and Performance Requirements for Flexible Advanced Nuclear Plants in Future U.S. Power Markets – Report for the ARPA-E MEITNER Program, July 2020) considered the cost required for SMR market success.  They found there will be large markets for advanced  reactors that cost less than $3,000/kW which will also be attractive investments for owners; and that together, renewables plus advanced nuclear (with thermal energy storage) lower overall system costs, reduce emissions, and improve performance in future U.S. electricity grids.

And much progress is being made.

In the US, the DOE has an aggressive strategy through its ARDP (Advanced Reactor Development Program) now underway to demonstrate two advanced reactor designs within five to seven years, and is also planning two to five smaller awards to address technical risks in other advanced designs. In addition, the US Department of Defence is investigating very small, transportable micro SMRs to support tactical deployments.

Here in Canada, in addition to the Canadian SMR Roadmap setting out a plan, the provinces of Ontario, Saskatchewan and New Brunswick have signed an MOU (Memorandum of Understanding) to move forward with the development and deployment of SMRs across Canada.  Work is underway to develop projects in all three provinces, both for on grid use and for remote locations.  Just recently the province of Alberta announced it will soon join this MOU.

In the UK, in November 2019, the government confirmed that it is investing in the UK SMR consortium led by Rolls-Royce.  Just recently, in June 2020, the consortium has submitted proposals to Ministers to accelerate the building of a new fleet of up to 16 SMRs in the North of England by 2050. Most recently, on July 10, The UK government awarded funds to three advanced reactor developers to kick start next-gen nuclear technology.

From the basic needs of ensuring we are warm and fed, to keeping us connected to our co-workers, friends, and family; having access to affordable energy is critical to our quality of life.  To meet these needs while aggressively lowering carbon emissions requires investment in technologies to deliver a future where we no longer rely on fossil fuels.  Most studies agree, a combination of nuclear power and renewables makes an excellent path forward while delivering the lowest cost energy solutions.

How do we ensure that nuclear power plays its role and meets its potential?  Three steps.

Nuclear power currently provides the second largest amount of low carbon electricity in the world (slightly behind hydro) and stands ready to do so much more.   While much work is already under way, there remains much more to be done.  But one thing is certain, the world needs energy, and lots of it.  With nuclear power making the contribution we know it can, our future is bright.

SMRs can be a game changer.

I think the correct grammar here may be "SMRs may be a game changer."  We may know if they can be when one is built and operational.   Only then can we know if they work in a safe and cost effective way.

If you expect the world to wait without developing alternatives that are renewable, safe and cost effective today, you may be disappointed.

Promises, promises. I hope you are right.

Mark, from a technological perspective the game doesn't need to be changed. Nuclear energy from Gen II reactors isn't responsible for a single death, at over 400 locations around the world, over 50 years - a record unparalleled by any other technology for generating public power.

"In a 2013 paper published in Environmental Science and Technology, Hansen et al. concluded that nuclear power has historically prevented 1.84 million human deaths worldwide. They also predicted that projected nuclear power will save anywhere from 4.39 to 7.04 million additional lives by 2050. This study was published in the aftermath of the 2011 disaster at Japan’s Fukushima Daiichi nuclear power station, when experts were concerned about the future of nuclear power. It remains relevant nearly a decade later, as world governments decide on the future trajectory of their energy portfolios."

The biggest challenge in fighting climate change isn't technology, but overcoming irrational fear - fear of energy powerful enough to get the job done.

Radiophobia, or irrational fear of ionizing radiation, isn't only dangerous when used as a weapon to close nuclear power plants:

"Imaging procedures such as CT and radiation therapy technologies utilize medical radiation to diagnose and treat a wide range of diseases – from cancer and appendicitis to stroke and heart disease – saving millions of lives each year."

Refusing treatment with medical radiation, of course, doesn't harm anyone but the victim him/herself. Like the anti-vaccine movement, it's one of nature's self-solving problems.